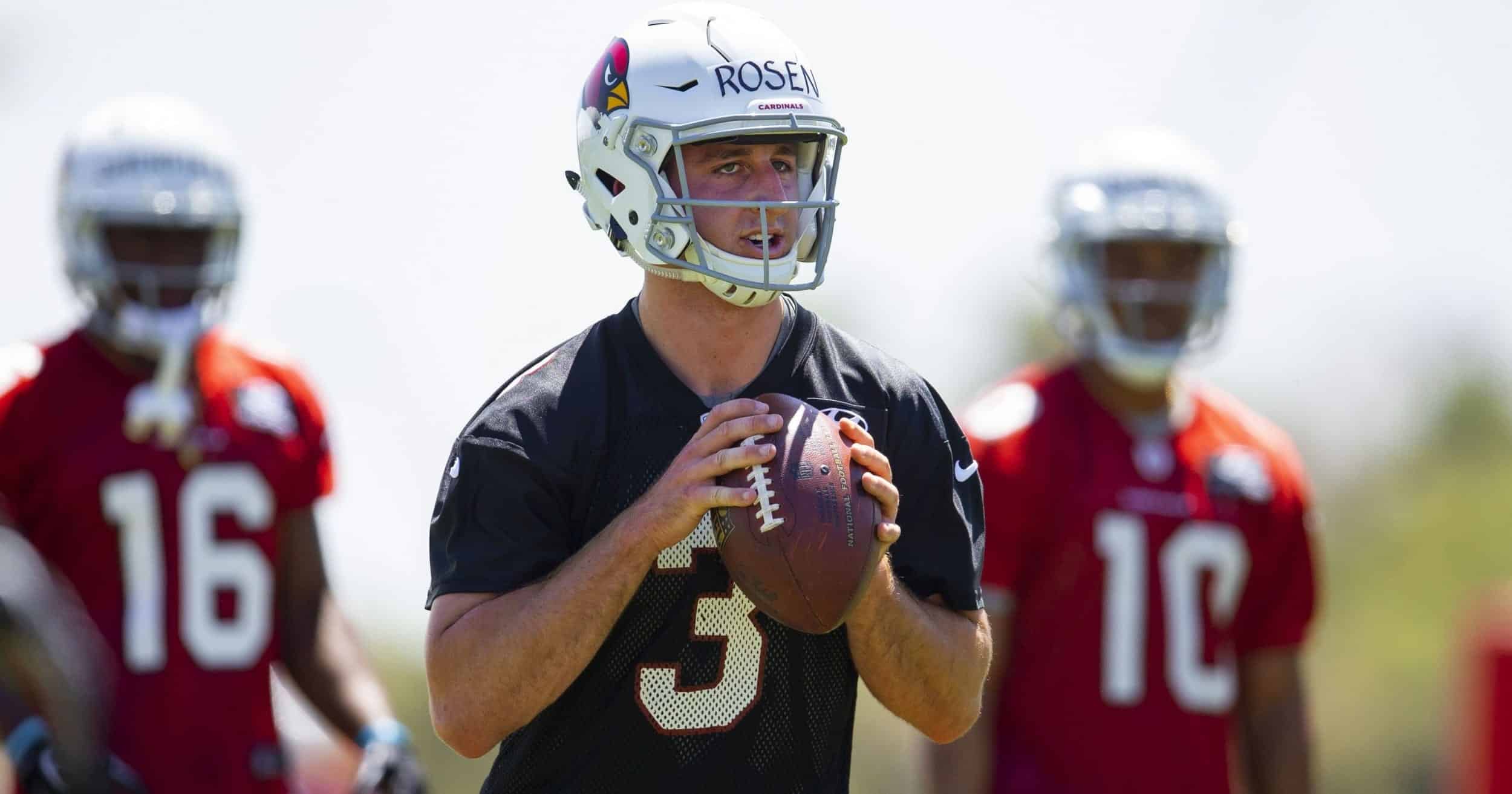 Photo Credit - USA Today
What's in this article? Click to show
Trade rumors surfaced around Arizona Cardinals quarterback Josh Rosen once Kliff Kingsbury was named head coach. Many speculate trading Rosen and drafting Kyler Murray is a done deal for Arizona. But is it true, or just a big fat smokescreen?
Why not trade him
His rookie year

Trade rumors surfaced around Arizona Cardinals quarterback Josh Rosen once Kliff Kingsbury was named head coach. Many speculate trading Rosen and drafting Kyler Murray is a done deal for Arizona. But is it true, or just a big fat smokescreen?

Many have considered the idea of the Arizona Cardinals trading Josh Rosen and drafting Kyler Murray a foregone conclusion. The speculation began when this quote from 2018 resurfaced sometime in January.

“Kyler is a freak. I’ve followed him since he was a sophomore in high school. Just think the world of him and what he can do on a football field. I’ve never seen one better in high school and he’s starting to show it now at the college level. I don’t have enough good things to say about him. He’s phenomenal…I would take him with the first pick of the draft if I could.”

That last sentence is what began all of the hype around Arizona trading Josh Rosen. ESPN’s Adam Schefter added to the speculation with his insight that Murray chose Erik Burkhardt to be his agent. Burkhardt also happens to be Kingsbury’s agent, so it makes sense that Murray would select him if he indeed is going to Arizona.

Time move Kyler Murray to AZ at #1 from pencil to pen.

That tweet is probably the most impactful of them all in terms of verifying the speculation. Allbright is a very reputable NFL reporter, so if you want to hang your hat based off that tweet, it certainly makes sense. But as of now, that tweet is nothing more than what we already have regarding the situation: speculation.

Kliff Kingsbury has since come out and stuck by Rosen as “their guy.” I know that is the politically correct thing to say, but if we’re using his word as one of the primary reasons why Arizona will trade Rosen, we have to take his word into account when considering the contrary. As it stands, Adam Schefter has said the Cardinals have not engaged in active trade talks to date, nor have they shown a willingness to trade him. His two most recent reports regarding the situation can be seen below:

Plus, the Cardinals still have not engaged in active trade discussions to date on Josh Rosen. Other teams have asked about him, but to date, the Cardinals have not shown a willingness to trade him. To date….

Given Kingsbury’s gushing remarks over Murray from October, it is clear the Arizona head coach is a fan of Murray. The Cardinals decision on their QB should be based on who they believe will be better long term, nothing more. I wrote in my Cardinals mock draft why the franchise should and shouldn’t select Murray first overall. At the top of the list of why was his prolific play in college. Take a look at these metrics:

That YPA was the highest mark in college since 2007, while his 95.4 QBR was a more than any posted by Baker Mayfield. There is no arguing Murray’s prowess on the field. Kingsbury said it himself. Some analysts believe Murray is the second best QB prospect to come out the past two years. In other words, only Baker Mayfield would project to be better than Murray. If the Cardinals are of that ilk, then trading Rosen makes sense. You get what you can for him and move on with Murray as the future of your franchise.

Why not trade him

The decision to trade Rosen starts with your opinion of Murray. While his play on the field is inarguable, there are red flags that extend beyond the game.

The first one that comes to mind is the interview with Dan Patrick. It was, to put it truthfully, brutal. Murray did not answer a single question on his own. Instead, he deferred to his dad several times. It was damning. There is no way you can watch that interview and say “I want that guy to be the face of my franchise and leader of my locker room.” Don’t take my word for it though. Watch the clip below and decide for yourself.

In a recent “Off the Charts” podcast from Football Outsiders, there have been only four QB’s drafted with just one year of college starting experience. Those players are Cam Newton, Mark Sanchez, Mitchell Trubisky and Matt Blundin. That’s it. Why is that so important? According to Football Outsider’s Aaron Schatz, the college experience is one of the most critical factors in determining success at the next level. So if we are questioning whether Murray can be a leader in the locker room, and we don’t have a baseline for players of his experience being drafted, can we draft him?

All things considered, he is probably the best QB prospect in this class. But that doesn’t mean I (Arizona) have to draft him first. I have a guy I gave up draft capital to trade up for last year — a guy who my current head coach has praised as well.

“Watching him last year, continuing to get up, it would’ve been easy for him to tap out…You all saw how bad it got, with all the injuries up front. Injuries at wideout, where guys couldn’t create separation. He was just back there taking hit after hit, continuing to get up, and played his best football at the end of the season. You see that as a coach, it’s very impressive. There is a lot there to work with.”

“Josh is a tremendous player, I’ve always thought, watching him at UCLA, he played his best football in a spread system, some similarities to what we do. He’s a tremendous thinker, very cerebral, can throw it with anybody.”

“We take a lot of pride in building a system around a quarterback…For someone to say he doesn’t fit our system, it doesn’t make sense.”

Those are all quotes from Kliff Kingsbury. I know we want to get all hyped up over what he said regarding Murray in October, but he has also talked highly of Rosen. They have to be considered equal in weight do they not? Other than those words from October, and a “lock it in tweet” from Benjamin Allbright, what proof do we have to substantiate the rumors that Arizona trades Rosen? The answer is none.

Let’s be clear about one thing: Rosen’s rookie year was dreadful. The Cardinals were terrible offensively by every measurable statistic possible. I would argue, however, that Rosen deserves a pass for last year. No one would have been successful in that situation. Firstly, he had to switch offensive coordinators midseason, as Mike Mccoy was abysmal. Byron Leftwich took over, but was a rookie play-caller and did not offer much.

Secondly, his offensive line was among the worst in the league. The skill positions weren’t much better. Aside from David Johnson, his best weapon was 35-year-old Larry Fitzgerald. The rest of the pass-catchers included underperforming tight end Ricky Seals-Jones, rookie receiver Christian Kirk and second-year man Chad Williams.

The play calling was atrocious, and the personnel was not much better. To say you have an opinion on Rosen that is based on his rookie year is just wrong. The offense was just as bad as Jared Goff‘s Los Angeles Rams unit in 2016. Yes, Rosen did not play well, but I don’t blame him given the terrible situation he was immersed in. We are now witnesses to Goff’s turnaround. He went from an awful rookie player to QB in a Super Bowl.

The popular opinion is that Arizona trades Rosen and drafts Murray. I don’t see that as the case. They invested a lot of draft capital in Rosen, and there is almost nothing you can gather from his rookie year. If Rosen seemed like a sunk cost then I would not only agree with Arizona wanting to trade him, I would applaud the franchise for admitting they were wrong. I don’t think that is the case here. Rosen can play. General Manager Steve Keim believed so by trading up to get him, and Kingsbury has said as much in interviews from the owner’s meetings. Both guys think Rosen can be a quality starter in the NFL.

Since the driving force behind these rumors stemmed from words from Kliff regarding Murray, I’ll leave you with one last quote from Kingsbury:

In this article:Josh Rosen, Kyler Murray