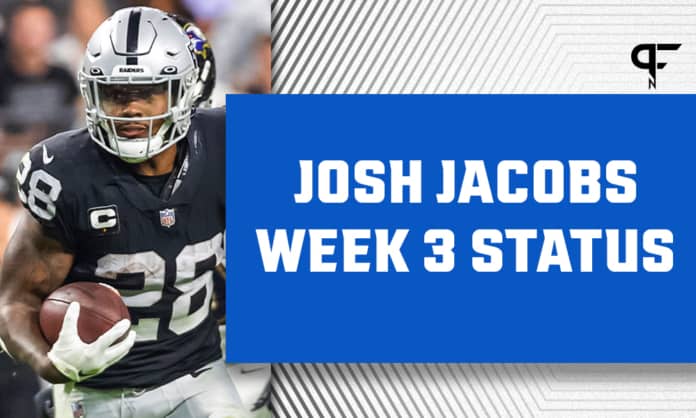 Josh Jacobs Injury Update: Will he play vs. Miami in Week 3?

Las Vegas Raiders running back Josh Jacobs is officially doubtful for Week 3 with an ankle injury that kept him out against the Steelers.

Las Vegas Raiders running back Josh Jacobs will likely miss his second straight game with an ankle injury — a helpful development for a Miami Dolphins team that needs all the help it can get.

Raiders coach Jon Gruden announced that Jacobs will be listed as doubtful for the Dolphins game following Vegas’ Friday afternoon practice, a session in which Jacobs could not participate.

What’s more, Jacobs was not available for a single practice rep this week and hasn’t played since logging 45 snaps in the opener. He has carried the ball just 10 times for 34 yards this year. Peyton Barber leapfrogged Kenyan Drake as Las Vegas’ featured back with Jacobs out in Week 2. Yet, no Raiders running backs have had any real success running the football.

Barber is averaging 2.5 yards per carry on the season, while Drake’s ypc is an ugly 1.5. If you remove the 31-yard run in the opener that ultimately landed Marcus Mariota on injured reserve, the Raiders have 103 rushing yards on 45 carries as a team in 2021.

However, Vegas doesn’t really have any other options to jump-start its running attack. Jacobs, Drake, and Barber are the only tailbacks on the Raiders’ active roster. Rookie Trey Ragas is on the practice squad, but Gruden has shown no eagerness to give the young back a promotion.

Raiders could struggle up front with Richie Incognito ruled out

A possible reason? The Raiders’ struggles are more of a reflection of an offensive line that will be without guard Richie Incognito (calf) for the third straight game.

“We feel pretty good, honestly,” Gruden said, when asked to evaluate how Drake and Barber played vs. the Steelers. “… We’ve got to get them some better looks [in] the running game. We’ve got to run the ball better collectively.”

Perhaps a change in opposition will help. Run defense has been a weakness for the Dolphins through two weeks. They’ve allowed 134 yards per game on the ground (ranking 28th) and 4.5 yards per carry (22nd).

Furthermore, the Dolphins will be without quarterback Tua Tagovailoa. Tua cracked his ribs in Miami’s Week 2 blowout loss at the hands of the Buffalo Bills.

Fantasy RB Rankings Week 7: Six teams on a bye shake up the rankings