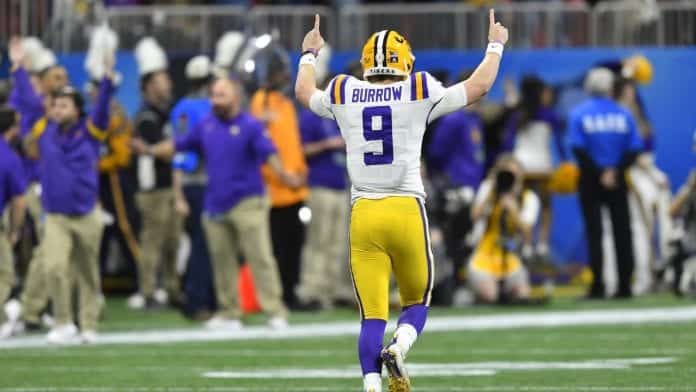 Can Joe Burrow bring the Bengals back into contention?

Cincinnati Bengals fans - and NFL fans - are waiting to see what kind of impact QB Joe Burrow will have when the Bengals open the 2020 season.

By PFN Staff
June 4, 2020
What's in this article? Click to show
Burrow had one of the greatest seasons ever for a college QB
Is this one of the Bengals’ best drafts in team history?
Bengals still deemed as a franchise on the outside looking in

Cincinnati Bengals fans – and NFL fans around the country – are waiting to see what kind of impact QB Joe Burrow will have when the Bengals open the 2020 season. The 23-year-old is one of the hottest prospects in the game right now, and there is no doubt that he has the potential to set the league on fire. The Bengals haven’t made a playoff appearance since 2015, and haven’t appeared at the Super Bowl since 1988. Could Burrow become the franchise quarterback many believe he can be, and be the turning point for Cincinnati?

After winning two games in 2019, the Bengals secured the first pick in the 2020 NFL Draft and surprised absolutely no one when they selected Burrow. Burrow led the LSU Tigers to the National Championship in the 2019 season and won the Heisman Trophy and Maxwell Award in doing so. He had perhaps the greatest season of college football by a quarterback in the history of the game, with over 5,600 yards passed and 60 touchdowns. Those stats are the highest ever recorded in NCAA Division history.

Burrow was the third-consecutive Heisman-winning quarterback to be selected first overall in the NFL Draft, following in the footsteps of Baker Mayfield and Kyler Murray. Despite the considerable amount of pressure on their shoulders, both of these players had what many consider successful rookie seasons, although Burrow is now entering an important third season.

Murray finished with 3,722 passing yards, 20 passing touchdowns, and 544 rushing yards for the Arizona Cardinals. For this, he earned the AP NFL Offensive Rookie of the Year Award. In his rookie season, Mayfield helped lead the Cleveland Browns to their best season since 2014 and surpassed legends Payton Manning and Russell Wilson for most touchdowns thrown in a debut campaign.

Burrow has what it takes to follow in the footsteps of these two rookie campaigns. With a better record in college football than both of them, the Iowa-born quarterback will be hoping that he can have an even bigger impact.

However, it could be argued that he faces the toughest challenge of all three of these players in helping the Bengals to challenge in the AFC North again.

Is this one of the Bengals’ best drafts in team history?

The Bengals’ 2020 draft has been lauded as one of the best of the year. Along with Burrow, the Cincinnati franchise managed to land WR Tee Higgins, LB Logan Wilson, and LB Akeem Davis-Gaither, among others. It remains to be seen just how big an impact these players will have, but many pundits agree that the Bengals made some good decisions.

It is too early to say whether this is the greatest draft in the franchise’s history, but it could well be up there. The 2011 draft is still considered to be the best for the Bengals, as they managed to land A.J. Green and Andy Dalton that year. These stars led the team to the playoffs in each of their first five seasons.

Bengals still deemed as a franchise on the outside looking in

Despite adding Burrow and others in the 2020 NFL Draft, the Bengals are still considered to be the underdogs in the AFC North, which should come as no surprise to anyone.

As of June 2, Betway are offering odds of 2000 for the Bengals to win their division. This puts them way behind the Browns, Pittsburgh Steelers, and Baltimore Ravens in the bookies’ predictions. This highlights the challenge ahead for Burrow in his rookie season with Cincinnati.

The question now is whether Cincinnati will build a worthy franchise around their new star quarterback. Sports Illustrated certainly thinks that the fact that the Bengals dealt out $130 million in player contracts shows that they are looking to create a viable foundation for future building.

The signs suggest that the Bengals are looking to move away from their past failings and work towards something bigger. However, it remains to be seen whether significant progress will be made in the campaign ahead. This is especially true considering head coach Zac Taylor and his staff won’t have as much time as they would have liked to work with Burrow in the offseason.

Burrow certainly has the ability to make an immediate impact in 2020, but whether the Bengals can make a surprise run at a playoff spot is another question. However, if Burrow lives up to expectations, that day won’t be far off.