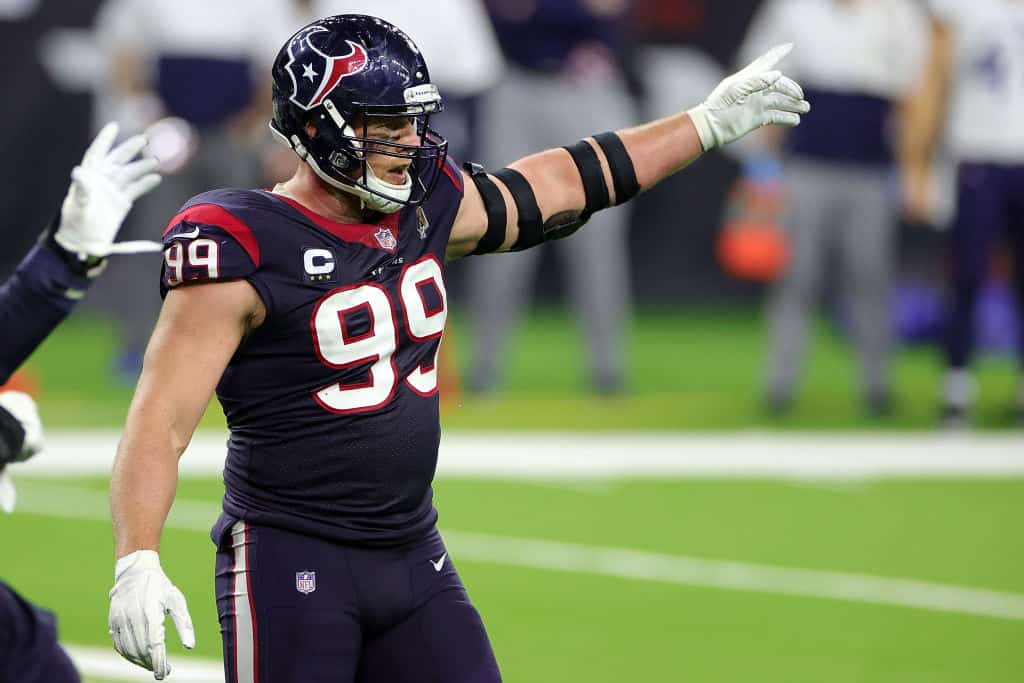 HOUSTON, TEXAS - JANUARY 03: J.J. Watt #99 of the Houston Texans reacts to a defensive stop during the second half of a game against the Tennessee Titans at NRG Stadium on January 03, 2021 in Houston, Texas. (Photo by Carmen Mandato/Getty Images)
What's in this article? Click to show
Top 5 J.J. Watt landing spots
The context of J.J. Watt’s career arc
Want more NFL news and analysis?

The recent dysfunction within the Houston Texans’ organization has led to speculation about J.J. Watt’s future. The three-time NFL Defensive Player of the Year is the best player in franchise history. At the forefront of those impacted by Hurricane Harvey, the expectation was that Watt would finish his career with the team. Now that the Texans have released him, here are five of the best J.J. Watt landing spots.

Let’s discern the best possible destinations for Watt based on what we understand about his motivating factors.

The Buccaneers have been regular offseason winners under general manager Jason Licht. This year, they could make good on their potential. The Bucs have one of the best defenses in the league, but Shaquil Barrett and Ndamukong Suh are entering free agency. They will leave holes on the defensive line if they’re not re-signed.

Tom Brady will be 44 when the season begins, and while he’s showing no signs of slowing down, he can’t play forever (surely). He was personally responsible for Rob Gronkowski, Leonard Fournette, and Antonio Brown joining the team. Would you bet against his influence extending to Watt?

Bill Belichick isn’t used to losing. The Patriots went 7-9 in their first season since Tom Brady’s departure, and the entire organization will want to prove that they can be successful without him. The franchise’s interest in Matthew Stafford was a statement of intent — they’re retooling and expect to be back in the playoffs soon.

Watt wouldn’t fill the void at quarterback, but he’d be a big upgrade to the defense. If the Patriots added Watt and a competent quarterback, then the Patriots would be back in competition in a loaded AFC East and make them one of the more appealing potential landing spots.

If there’s one thing that we know about Jerry Jones, it’s that he likes to make a splash. The opportunity to keep Watt in Texas is sure to tempt him.

After dominating the NFL in the 90s, the team has struggled to impact the postseason in the 21st century. Jones’ desire for another Super Bowl is palpable. Uncertainty over Dak Prescott’s future looms over the team, and any deal will reduce their cap flexibility. Still, Watt’s high-energy personality would be an instant hit with new defensive coordinator Dan Quinn.

The Dolphins narrowly missed out on the playoffs in 2020, despite finishing with a 10-6 record. They’re a young, improving team with a great head coach. Yet, allowing the Buffalo Bills to score 56 points in Week 17 stung.

Emmanuel Ogbah led the team with nine sacks, but he didn’t get much help from the rest of the defensive line. If the Dolphins’ defense is to reach its potential, they will have to rely on more than just well-schemed blitzes. Watt can still win one-on-one matchups, and the Dolphins have the cap space required to bring him in.

The Ravens have traded effectively in recent years, bringing in productive veterans such as Calais Campbell, Yannick Ngakoue, and Marcus Peters without giving up high draft picks.

Matt Judon, who led the team in sacks, is a free agent this offseason, as is Ngakoue and Pernell McPhee. If the Ravens are looking to add a pass rusher, Watt’s versatility will appeal to defensive coordinator Don Martindale. No quarterback would want to see Watt and Campbell bringing interior pressure, and it would ease the Ravens’ reliance on blitzes.

Watt will turn 32 in March, so his best days could be behind him. There shouldn’t be any shortage of suitors for the future Hall of Famer, though.

NFL Network’s Mike Garafolo made it clear that Watt is looking for one thing in particular. “He certainly wants to play for a winner,” Garafolo reported. “He’s been to the playoffs in his career, but he wants to go deep into the playoffs, deeper than he’s ever been.”

In this article:Featured, jj watt 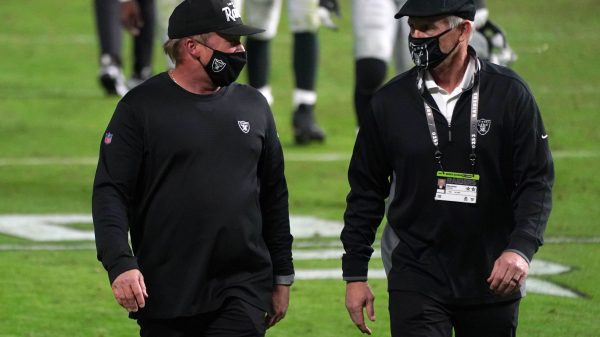 What is the Las Vegas Raiders' salary cap situation for 2021, and how can they open up more salary cap space this offseason?