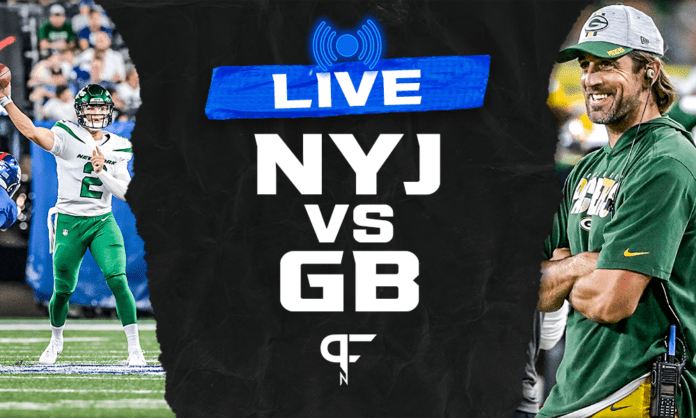 What was the score, highlights, and big plays from the New York Jets at Green Bay Packers preseason Week 2 matchup in Lambeau Field?

This week’s Saturday afternoon NFL preseason game saw the New York Jets at the Green Bay Packers. Week 2 saw both teams looking for better performances than we saw last week. In the article below, we take you through the scoring plays, the other highlights, and look at how the game played out between the Jets and Packers.

Given the Packers’ top two quarterbacks were not playing, this game started off in an entertaining way. Both teams scored on their first drive, followed by punts. But then Zach Wilson got the Jets’ offense rolling. He finished a good drive with an 18-yard touchdown to TE Tyler Kroft. Kurt Benkert and the Packers responded with a touchdown of their own before a long kickoff return led to another 18-yard Wilson to Kroft touchdown.

That was the end of the day for Wilson who finished 9-for-11 with 128 yards and 2 touchdowns. His connection with Corey Davis was particularly promising. Davis had 4 receptions on 6 targets for 70 yards, including a couple of big third-down conversions.

Unfortunately for the Jets, that is where the good news ends. The Jets had injury issues for both Jarrad Davis and Conor McDermott. Both players left the field on the cart, adding to a worrying injury list for New York.

For the Packers, the most promising elements of this game were a strong opening performance from RB A.J. Dillon and a solid out for Kylin Hill. Patrick Taylor threw his hat in the ring for a roster spot with 7 carries for 40 yards, and WR Malik Taylor had 4 receptions for 66 yards.

Jets and Packers highlights and updates

7:10 PM ET: After a three and out for the Jets, Jake Dolegala is in for the Packers. INTERCEPTION. Dolegala goes deep with his first pass attempt and CB Lamar Jackson picks him off at the Jets’ 32-yard line.

7:00 PM ET: The Jets punt after a six-play drive that goes just 17 yards. Benkert is then sacked on the first play of the Packers drive, leading to another three-and-out. In the second half, the Packers have a fumble, an interception, two punts, and a turnover on downs.

6:50 PM ET: After a drive that saw a big play to Amari Rodgers on third down, the Packers turned the ball over on downs at the Jet’s 25-yard line.

6:45 PM ET: Mike White was injured on the first play after the interception. James Morgan came into the game, but could not convert on 3rd-and-5, leading to a Jets punt.

6:33 PM ET: INTERCEPTION. The Packers are putting together a solid drive, but Benkert is picked off by Brandin Echols at the Jet’s 28-yard line. He returns the ball 23 yards, but a penalty takes the ball back to the Jet’s 35-yard line.

6:25 PM ET: Michael Carter is in the game for the Jets, and he carries the ball 5 times for 32 yards. The Jets drive stalls on the Packers’ 12-yard line and Ammendola fires home another FIELD GOAL.

6:10 PM ET: The Jets can only advance 7 yards on the ensuing 7 plays. K Ammendola just slides the FIELD GOAL inside the left upright.

6:05 PM ET: Patrick Taylor opens the half with a FUMBLE that leads to a challenge from the Jets. The challenge is successful and the Jets get the ball back.

5:50 PM ET: White heads into the half with 4 straight completions for 30 yards. The Jets lead 17-14 at the half, but the story of the half is the performance of Wilson.

5:45 PM ET: Another injury for the Jets. This time it is OL Conor McDermott leaving the field on the cart. It has been a tough week for the Jets in Green Bay.

5:42 PM ET: After another Packers’ three-and-out, the Jets decide that Wilson’s day is done as Mike White enters the game. Wilson finishes 9-of-11 for 128 yards with 2 touchdowns.

5:37 PM ET: TOUCHDOWN. After a huge return from Corey Ballentine, the Jets need just three plays to find the end zone. Once again it is TE Kroft who reels in the 18-yard pass from Wilson.

#Jets offense has been moving 👀pic.twitter.com/4V3JfQiBl8

5:30 PM ET: On a 3rd-and-12, C.J. Mosley tackles Hill on pass coverage drawing a holding penalty and extending the drive. An offensive holding penalty then drives the Packers back 10 yards. TOUCHDOWN. The Packers get back inside the 10-yard line and Benkert finds Jace Sternberger on third down to take the lead again.

It's Kurt Benkert's world and we're all just living in it.pic.twitter.com/j7j8X3BTpj

5:25 PM ET: Back on the field, this is turning into quite a game. Benkert has led the Packers into the red zone with a 21-yard pass to Taylor. Earlier on the drive, Benkert converted a 4th-and-2 with an 11-yard completion to WR Reggie Begelton.

5:20 PM ET: The Jets have another injury to deal with. LB Jarrad Davis was helped off the field and into the blue tent. He has now been taken from the sidelines on the cart. Potentially a really tough break for both Davis and the Jets, as he would have been a key part of their defense in a prove-it type year.

5:15 PM ET: Kylin Hill is now making plays on the ground and through the air. He just made a 6-yard reception to move the chains on 3rd-and-5. He has 29 yards and a touchdown on 6 touches so far.

5:05 PM ET: After a penalty backs the Jets up, Wilson zips a ball into TE Tyler Kroft for an 18-yard TOUCHDOWN. Lovely throw and a good catch from Kroft.

Zach Wilson with another nice throw, this time to Tyler Kroft for the touchdown.#NYJvsGBpic.twitter.com/0PTugqDTzw

5:00 PM ET: The Wilson-to-Davis connection is really clicking nicely. On 3rd-and-2, Wilson hangs in and finds Davis across the middle, who takes it for a 14-yard gain and a first down. They then combine again for a 27-yard completion to take the Jets inside the red zone.

Should we start getting used to the Zach Wilson and Corey Davis connection?pic.twitter.com/lnijRt1AwX

4:55 PM ET: The Packers go three-and-out after starting their drive with a 3-yard loss for Hill. They punt back to the Jets, who get the ball at their own 35-yard line following a penalty.

4:50 PM ET: Zach Wilson with another solid start to the drive. With 2 straight completions, he has opened the game 5-of-6 for 51 yards. The Jets then turn to the running game, but they fail to convert a 3rd-and-1. The Jets decide to punt from their 49-yard line. A fantastic punt spins back and is grabbed by the Jets at the 11-yard line.

It's the Kylin Hill show.pic.twitter.com/lx1Ew2xDUE

4:45 PM ET: The challenge is successful for a 32-yard pass to Malik Taylor. It then becomes the Dillon show again, before rookie RB Kylin Hill sweeps around the edge of the Jets’ defense for a 12-yard TOUCHDOWN.

4:40 PM ET: Kurt Benkert is the starting QB for the Packers with Jordan Love and Aaron Rodgers inactive. Second-year RB A.J. Dillon starts with a 6-yard reception and another 14 yards on the ground. Benkert then looks like he has a completion tight on the sideline. It is called incomplete, but the Packers are challenging the call.

4:30 PM ET: The Jets take the field with Zach Wilson under center. On a 3rd-and-8, Wilson finds Corey Davis for 24 yards to move the chains. He then hits TE Trevon Wesco on the right for another 17 yards. However, he cannot complete a pass to Davis on the next third down. Matt Ammendola hits a 54-yard FIELD GOAL to open the scoring.

Zach Wilson starts off hot for the Jets.pic.twitter.com/YX2tEnRieS