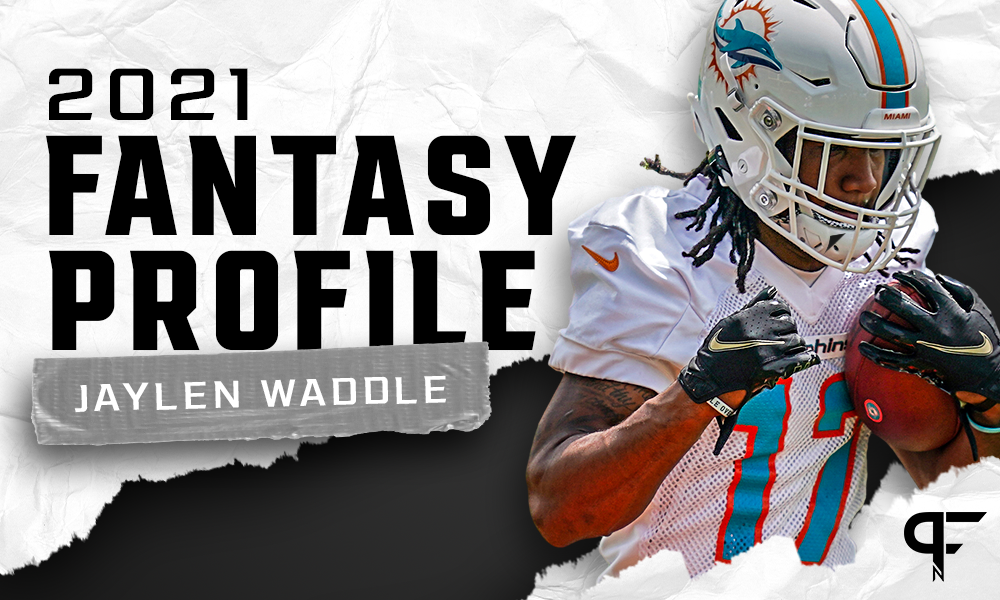 As one of the most electric rookies in 2021, what is Jaylen Waddle's fantasy outlook for 2021, and should you draft him at his ADP?

One of the most electric players in all of college football, Miami Dolphins WR Jaylen Waddle, has the potential to lead all rookies as a receiver in 2021. Now reunited with his former QB, is Waddle a bargain at his current ADP, and just how high can his fantasy football outlook climb as the season approaches?

There is speed, and then there is incendiary speed that would make Max Verstappen blush. In open space, Waddle is a defender’s worst nightmare. His low 4.3 speed destroys angles of would-be tacklers.

Waddle entered the 2020 season viewed as the WR2 behind Ja’Marr Chase and, despite his ankle injury in Week 5, came out in the same order. The former Alabama WR ended his career playing in 34 games over three seasons, catching 106 passes for 1,999 yards and 17 touchdowns. Furthermore, he racked up 947 yards and 3 touchdowns on 47 punt/kick returns.

While the Dolphins did sign Will Fuller in free agency, Waddle’s addition addresses a significant void in Miami’s depth chart in the slot. He played both outside and inside in college but given his size and speed, Waddle projects to be a dynamic slot receiver that virtually no nickel DB can keep up with during a play.

While all eyes are on Chase and Smith to come out on fire as rookies, I would not be surprised at all if the leader of the pack is Waddle. If Tua does take the leap forward as I expect he can and will do, Waddle could very well be a steal in fantasy drafts as his outlook projects him to possibly be the WR1 for the team in 2021.

As with virtually every other receiver in the NFL, how much you believe in them comes down to how well you project the quarterback to play. For me, I have stated several times I expect Tua to take that step forward. He will have an entire offseason as the QB1 and does not have Ryan Fitzpatrick standing over his shoulder.

There is a learning period for receivers to get on the same page with their QB. Still, that chemistry should be instant between these two as they rekindle their success from college.

The other factor to consider is the change from Chan Gailey at OC to a co-offensive coordinator system with Eric Studesville and George Godsey. What does this mean? We will likely see more creative playcalling. The offense will blend college and professional schemes, using more RPOs and featuring tempo, shifts, and motions.

This describes the style of offense that Tua can thrive in with his accuracy and decision-making abilities. What it also means is allowing players to create yards in space after the catch. Something that defines Waddle’s game.

Where is Waddle on the depth chart?

On paper, people are penciling in Waddle as the WR3 on the depth chart — which might be accurate. Yet, how many weeks will he even have both Fuller and DeVante Parker on the field simultaneously? Neither is the picture of consistency in that department. Fuller has averaged 5.5 games missed over his career, and Parker played in all 16 games once and in 83 of 96 possible games.

There will be several weeks where Waddle is at worst the “WR2,” but likely sees the majority of targets. Each receiver will see work, and they all could be in the 100-target range. In early projections, Waddle comes in around 100-106 targets, 64-68 reception, 875-900 yards, and 5-6 touchdowns.

According to Sleeper, Waddle is currently being selected with an ADP of 100.2 in half PPR formats. However, in the National Fantasy Championship (a high-stakes fantasy platform), Waddle has an ADP of 105.1. His ADP of lowest of the lot on Fleaflicker at 116.5.

Should you draft Jaylen Waddle in 2021 for fantasy?

What I find interesting is the disparity in how the two sites view Waddle. On NFC, Fuller is seen as the more valuable Dolphins receiver. However, on Sleeper, Waddle is the WR1. Still, both are in agreement with Parker as the WR3 after his return to Earth in 2020.

The Dolphins are going to be a balanced offense so long as Brian Flores is the head coach. They will never be a team that will throw 650 times. When you have three very competent receivers and one of the most athletic TEs in Mike Gesicki, it’s hard to see any of them having over 115-120 targets and truly exploding for fantasy.

Regardless, if there’s a player that can be a WR3 with WR2 weeks with limited targets, it’s Waddle. He has the ball skills to win at the catch point, the release, and speed to create instant separation — which Tua can and will exploit. As a WR3, I am all in on Waddle for fantasy in 2021.