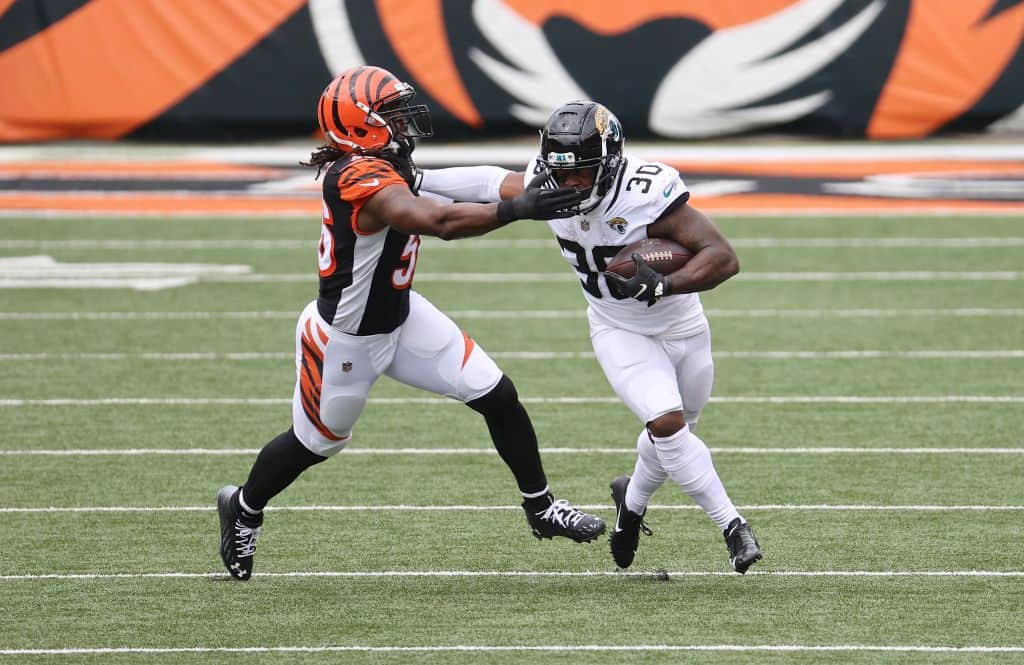 CINCINNATI, OHIO - OCTOBER 04: James Robinson #30 of the Jacksonville Jaguars runs with the ball while defended by Carl Lawson #58 Cincinnati Bengals Paul Brown Stadium on October 04, 2020 in Cincinnati, Ohio. (Photo by Andy Lyons/Getty Images)
What's in this article? Click to show
James Robinson’s college career and journey to the NFL
James Robinson impressed with his athletic testing
A bruising and physical style of play

Before starting the 2020 NFL season, the Jacksonville Jaguars continued their offseason expulsion of players when the franchise waived 2017 fourth overall pick Leonard Fournette. The move was not necessarily a surprise, but the lack of an answer in the running back group did leave some puzzled. Jacksonville did not have to wait long for the hole to be filled, as their undrafted rookie free agent James Robinson has taken the position by storm.

James Robinson’s college career and journey to the NFL

James Robinson played four years of college football for the Illinois State University Redbirds. After missing three games his freshman season due to a calf injury in 2016, Robinson would become the Redbirds starting RB for the next three seasons. He was named first-team All-Missouri Valley Football Conference from 2017-2019 and was a consensus first-team FCS All-American his senior season after rushing for 1,899 yards and 18 touchdowns in 2019.

Robinson finished his collegiate career with 4,444 rushing yards, the second-most in Redbirds history. However, the talent gap from the FCS to the NFL can be massive, but his testing metrics demonstrated that Robinson had the potential to make an impact in the NFL. 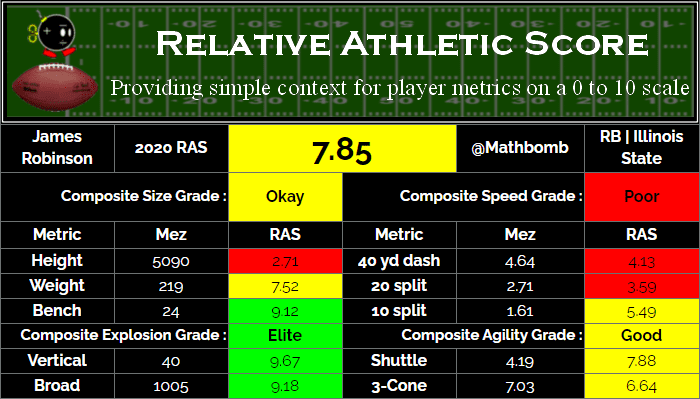 James Robinson earned a Relative Athletics Score of 7.85 on a scale of one to ten. RAS is a composite metric based on the average of all the percentiles for each of the metrics the player completed at either the Combine or his Pro Day. Robinson’s RAS placed him as the 10th overall RB in the 2020 class.

Robinson’s strengths lie in his explosion more so than his speed and agility. Boasting an elite composite explosion grade putting up a 40-inch vertical and broad jumping 10 feet and 5 inches, equating to RAS scores of 9.67 and 9.18, respectively. His vertical jump ranked 48th out of 1424 RBs with a recorded vertical jump.  Along with his explosion comes impressive strength as he was able to bench press 225 lbs. 24 times, which was another high RAS mark at 9.12.

His speed leaves something to be desired, running the 40-yard dash in 4.64 seconds at the 2020 NFL Combine, but even during his college days, his speed was never something that was looked at as a strong suit. The short and stocky running back measured at 5 feet and 9 inches, while providing a scale reading of 219 pounds.

After the completion of the 2020 NFL Draft, the Jaguars signed Robinson as an undrafted free agent on April 27.

A bruising and physical style of play

Make no mistake, James Robinson is not streaking by defenders and leaving a cloud of dust behind him. He is fighting for every yard, running through contact, breaking tackles, and keeping those legs churning to gain that extra yard. Plays like the one below have become the standard when watching the Jaguars RB take the field.

He invites contact and powers through his short and stocky body, giving him the ability to keep his balance when taking on the force of those body blows from defenders. Another reason for Robinson’s ease of transition into the starting role is the surprisingly strong play from the offensive line. The Jaguars run blocking ranked as one of the worst units in 2019, but they have flipped a switch and moved to the top half of the league this season.

Robinson has had at least 90 yards from scrimmage in every game this season. In Week 4 versus the Cincinnati Bengals, he rushed for 75 yards and caught all four of his targets for 32 yards. While Robinson topped 100+ yards from scrimmage for the third consecutive week, it was a bit disappointing there weren’t more fireworks as the Bengal’s defense has been allowing 181.7 rushing yards per game heading into Week 4.

Robinson is also averaging 4.8 yards per rush compared to Fournette’s 4.3 yards per rush in 2019 with just about the same offensive line. Within this season, comparisons have yet to be seen as Fournette has not had nearly as much playing time with the Tampa Bay Buccaneers as Robinson has had with the Jaguars. However, while Robinson is outperforming Fournette at the moment, the separation between Jacksonville and Fournette was the best scenario for both sides amidst a continually deteriorating relationship.

While James Robinson is one-upping Fournette’s play from a year ago, the running back fit is better now. Robinson is built to sustain hits and power through them, and while Fournette is a strong runner in his own right, the Jaguars run blocking let him down. Robinson comes in with great football IQ and field vision and can also use his build to take on pass rushers when protecting QB Gardner Minshew. The undrafted rookie has stepped in wonderfully so far. It is time to see just how far he will go.