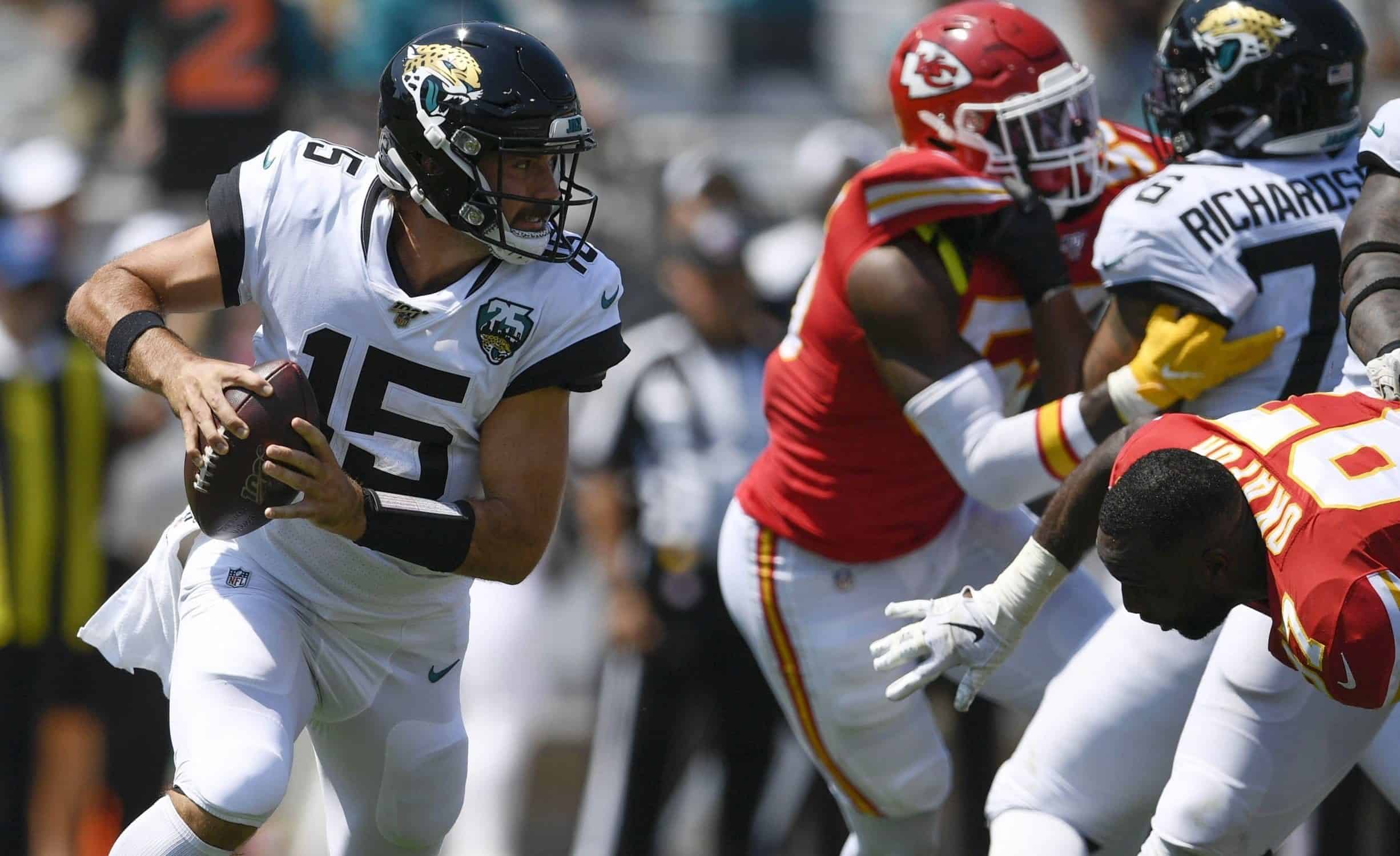 Many college football fans are familiar with the Mississippi Moustache. His name is Gardner Minshew and he’s a living legend in Pullman, Washington. He even has a song written about him for all the magic he pulled at Washington State last season. Now, NFL fans are familiar with Minshew. When newly signed Jacksonville Jaguars quarterback Nick Foles went down with a broken clavicle on a touchdown pass to DJ Chark in the first quarter, all hope seemed lost for the team. With 2:36 remaining in the first quarter Minshew entered, and although the Jaguars lost 40-26 to the Chiefs, he provided optimism.

To truly understand how close Minshew was to never taking a snap for the Jaguars, you have to go back to his high school days. He was just a three-star recruit and planned on heading to Troy, but quickly returned to Mississippi. After a dominant performance in his lone season at Northwest Mississippi Community College, in which he led the school to the NJCAA National Championship game, he transferred to East Carolina. Minshew spent just two seasons as a part-time starter for the Pirates under Scottie Montgomery. East Carolina went 6-18 in those two seasons and Minshew threw 24 touchdowns and 11 interceptions in 17 games.

Without much NFL Draft hype and very little success at East Carolina in terms of wins, Minshew wanted to grad transfer. Known for his high football IQ and charisma, he wanted to get into coaching. Despite knowing he wouldn’t sniff the field, the best way into coaching was at Alabama under Nick Saban. Minshew announced he would transfer there with an eye on being their third-string quarterback/graduate assistant coach. Then the king of the Air Raid offense called.

It wasn’t much of a story when Minshew announced he would grad transfer from East Carolina to Washington State instead of Alabama. With Luke Falk gone and Mike Leach in need of a quarterback, he called Minshew who had experience in the air raid offense. The air raid offense is the lifeblood of Leach football. It’s the most beautiful passing offense that entails constant throwing and a very simplified playbook. The air raid is how Leach has built his career and turned both Texas Tech and Washington State into perennially ranked teams. Leach is 51-40 in his career with 15 bowl appearances despite never landing impressive recruiting classes. He invented the air raid in the 1990s with Hal Mumme while coaching at Iowa Wesleyan College. Since then, they’ve taught it to the likes of Lincoln Riley, Kliff Kingsbury, and Dana Holgorsen, among others.

So why did Leach want Minshew? Because to run the air raid, you need a high football IQ passer with a quick release and consistent accuracy. The quarterback in the air raid is like an offensive coordinator. Often they go to the line with only passing plays called and check into runs. Guys like Kingsbury, Graham Harrell, Falk, Seth Doege, and Connor Halliday have thrived in the air raid with Leach. None of them went onto success in the NFL, but the majority of them are already into coaching. Minshew checked the future coach box, but then he exceeded expectations.

At Washington State, Minshew quickly created a buzz in the college football world with his gaudy passing numbers. Then with some major wins over Utah, Oregon, and Stanford, the NFL started paying attention. Minshew went 11-2 as the starter for the Cougars and threw for 4,779 yards with 42 total touchdowns and a fifth-place Heisman finish. In a quarterback class that lacked depth, Minshew’s name started to gain steam, and the Jaguars took notice.

Despite playing in the air raid, Minshew was more than a product of Mike Leach’s genius. He showed NFL traits at Washington State. The high football IQ translated into his play. The best part about his game was his mental processing ability and quick decision making. The consistent accuracy on every level was what really grabbed NFL attention. Then an impressive Senior Bowl performance where his leadership skills reminded some of Baker Mayfield had the entire draft community on his side.

Minshew isn’t a physically gifted passer. He has enough arm/zip, decent footwork, and solid mobility. What he showed at Washington State was all the tools to be a long-term NFL backup with spot starting ability. His decision making, poise, accuracy, and leadership are exactly what you want in a QB2. Just enough to survive when the starter is out, but not enough to be the go-to guy for a long period of time. Minshew drew many Colt McCoy, Chase Daniel, and Brian Hoyer comparisons. When the Jaguars took him in the sixth round, it seemed like a smart move for a developmental backup behind Foles.

It was unfortunate timing when Foles went down with the broken clavicle. He had just thrown the best touchdown pass Jaguars fans have seen in years. Throwing a rookie sixth-round pick into the fire Week 1 never feels good for a fan base, especially one that has dealt with so many issues at quarterback. Minshew beat  Alex McGough for the backup job in the preseason, so expectations were low. When Minshew entered the game, the Jaguars were already down 17-7, but he wasn’t rattled and showed tons of potential.

Minshew immediately led the Jaguars to a field goal drive. He was getting the ball out quickly to his play-makers in space. His ability to process and read the field was evident in the short to intermediate passing game. A lot of rookies are afraid to attack the middle of the field, but Minshew wasn’t and went there frequently. On his second drive of the game, offensive coordinator John DeFilippo called a play-action deep shot and Minshew hit Chark in stride for 69 yards. It was his most impressive throw of the day. The play-action passing game was clearly something Minshew felt comfortable in as DeFilippo went back to it throughout the game.

In the second half, Minshew was moving the Jaguars down the field on the opening drive before a Leonard Fournette fumble. Again, his IQ was showing with his ability to manipulate the safeties to create openings in coverage. When he was given time in the pocket, he was comfortable and poised. When under fire, he got the ball out quickly for the most part and did a great job going to his check down. One of the most surprising things about his debut was how few mistakes he made. The ball was out of his hand on time and rarely did he have issues forcing throws into coverage or taking unnecessary sacks.

Minshew operated the offense like a veteran with his decision making and willingness to hold strong in the pocket with the pass rush bearing down. In the fourth quarter, he led two touchdown drives with his ability to extend plays on display. His first touchdown came when the pocket broke down. Minshew kept his eyes downfield and hit Dede Westbrook for the score.

The lone negative to the outing was Minshew’s pocket awareness. Minshew was only sacked once, but there were times he would drift in the pocket or hold the ball too long and take unnecessary hits. His lone interception came when the pocket got muddy and he didn’t feel the pressure. That’s just nitpicking. Given the circumstances, this was as impressive a performance as one could hope for from Minshew. Completing 88% of his passes for 275 yards and 2 touchdowns when thrown into the game like that as a rookie is mind-boggling.

What to expect from Minshew

With the Jaguars placing Nick Foles on IR, Gardner Minshew is the starter for the foreseeable future. The team traded a fifth-round pick to the Pittsburgh Steelers for quarterback Josh Dobbs, but this is Minshew’s team going forward. Despite his impressive debut, NFL teams will be far more prepared for Minshew and DeFilippo in the following weeks. It’s going to be important for them to continue to open up the offense and take advantage of Minshew’s strengths. Using play-action passes to attack deep, quick throws, RPOs, and getting the running game going will be key.

Foles could return by Week 10 when the Jaguars have their bye week. If Minshew can go 3-5 over that stretch, that would be a huge win for this team. He’s a rookie so struggles will come and the Jaguars play a tough schedule. The season isn’t dead yet in Jacksonville, but it’s on the shoulders of the Mississippi Moustache.

In this article:Featured, featured, Gardner Minshew