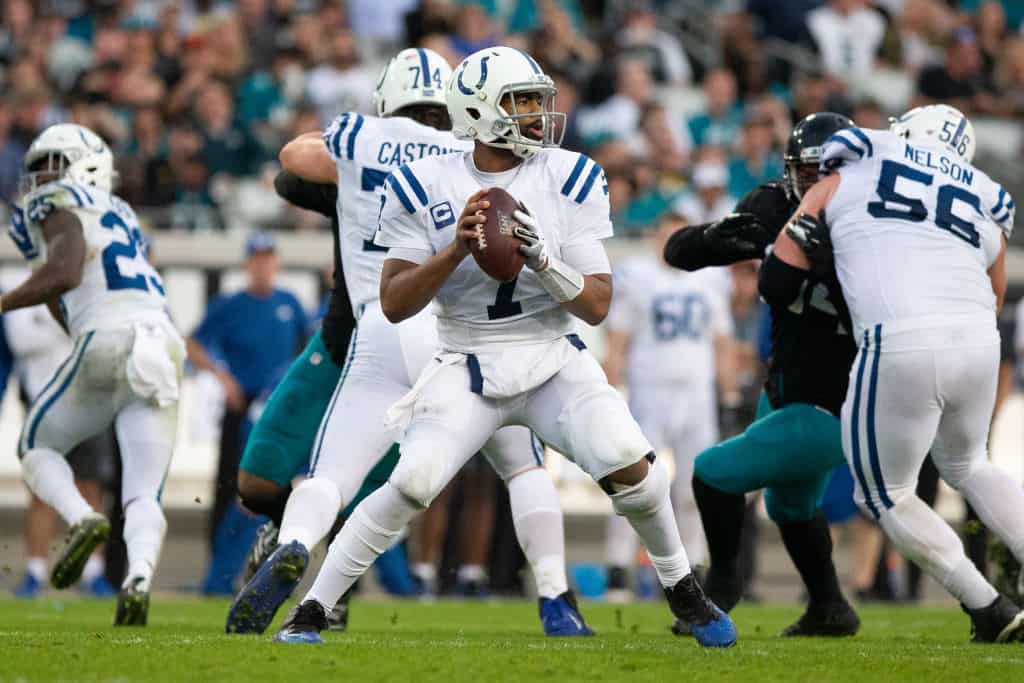 Jacoby Brissett has experienced quite the wild ride throughout his five-year NFL career. He’s served as a starting quarterback, a backup quarterback, and has been used in multi-quarterback groupings during his time with the New England Patriots and Indianapolis Colts. So what does Jacoby Brissett’s future hold as he enters free agency in 2021?

After signing an extension with the Colts in 2019 for two years, $30 million, Brissett will be a part of free agency this offseason.

During his time in Indianapolis, Brissett led the Colts to an 11-19 record as a starter. Although, Brissett may still be a backup quarterback in 2021. Yet, he still may find himself having takers that see him as a stopgap option. Many teams will be exploring free agent quarterbacks as they transition from an aging quarterback to a rookie.

With Philip Rivers retiring, how does that position Jacoby Brissett with the Colts?

After Philip Rivers called it a career and retired, the Colts now find themselves in a position to draft a quarterback or pursue a signal-caller in free agency.

Related | 5 quarterbacks that could replace Philip Rivers in Indianapolis

The Colts hold the No. 21 overall pick in the 2021 NFL Draft, so they’re not positioned well to get one of the top four quarterbacks in the draft: Trevor Lawrence, Zach Wilson, Justin Fields, and Trey Lance. While they could trade up if they have their sights set on a quarterback, the Colts don’t have a surplus of extra draft capital to part ways with.

Given the uncertainties of the Colts’ quarterback position, one option would be to retain Brissett for his comfortability within coach Frank Reich’s offense. It’s well-documented from teammates and members of the Colts’ coaching staff that Brissett accepted his role in 2020 with open arms. With Rivers joining the team, Brissett was forced to take a back seat. In doing so, Brissett didn’t ruffle any feathers during the process.

Additionally, Brissett earned the Colts’ nomination as their representative for the Walter Payton Man of the Year award — given yearly to the player who displays “the NFL’s commitment to philanthropy and community impact.”

With the Patriots having a quarterback vacancy and Brissett being a free agent, their already-established bond makes total sense for a potential reconnection. Brissett started two games with the Patriots in 2016 prior to suffering an injury that sidelined him. Yet, in doing so, he led the team to a 1-1 record in Josh McDaniels’ offensive scheme.

Assuming the Patriots part ways with Cam Newton, inserting Brissett would maintain the running ability from their signal-caller. As the Patriots hold the No.15 overall pick, any quarterback they select at that stage in the draft needs some level of mentorship from a veteran before being thrown into the starting role. Brissett would offer exactly that while circling back to the coaching staff that originally drafted him. It feels like a match made to be this offseason.

The Bears’ history regarding the quarterback position has been a wreck for decades. Brissett isn’t exactly the type to come in and save the franchise. However, with Mitchell Trubisky entering free agency this offseason and Nick Foles’ ineffectiveness, Brissett is an option they can pursue as a stopgap, pairing him with a quarterback in the 2021 NFL Draft.

Bears’ general manager Ryan Pace said, “everything is on the table” referencing Chicago’s future at quarterback. While he and coach Matt Nagy are likely on their last leg of operating the franchise, you’d expect them to allocate additional resources at quarterback as they have to get the position right this season.

The Broncos drafted Drew Lock in 2019 hoping that he would become their quarterback of the future. Since then, Lock has had moments of looking like a player to build around. However, he also has times where his decision-making capacity isn’t up to par.

Lock led the NFL with 15 interceptions throughout the 2020 season. Perhaps some of those interceptions are part of being an inexperienced quarterback and can get fixed with more reps. But for now, Denver could use a high-level backup.

To keep up with the AFC West group of quarterbacks, including Patrick Mahomes, Justin Herbert, and Derek Carr, the Broncos need better quarterback play. The Broncos likely give Lock another crack at it in 2021. Although, having a backup option like Brissett in case things go south isn’t such a bad idea. Denver saw what they have this season from Lock and their backup options. Therefore, exploring quarterback options in free agency isn’t too far-fetched.

Nick Cothrel is an editor and writer for Pro Football Network, covering the NFL. You can read more of his work here and follow him at @NickCothrel on Twitter.