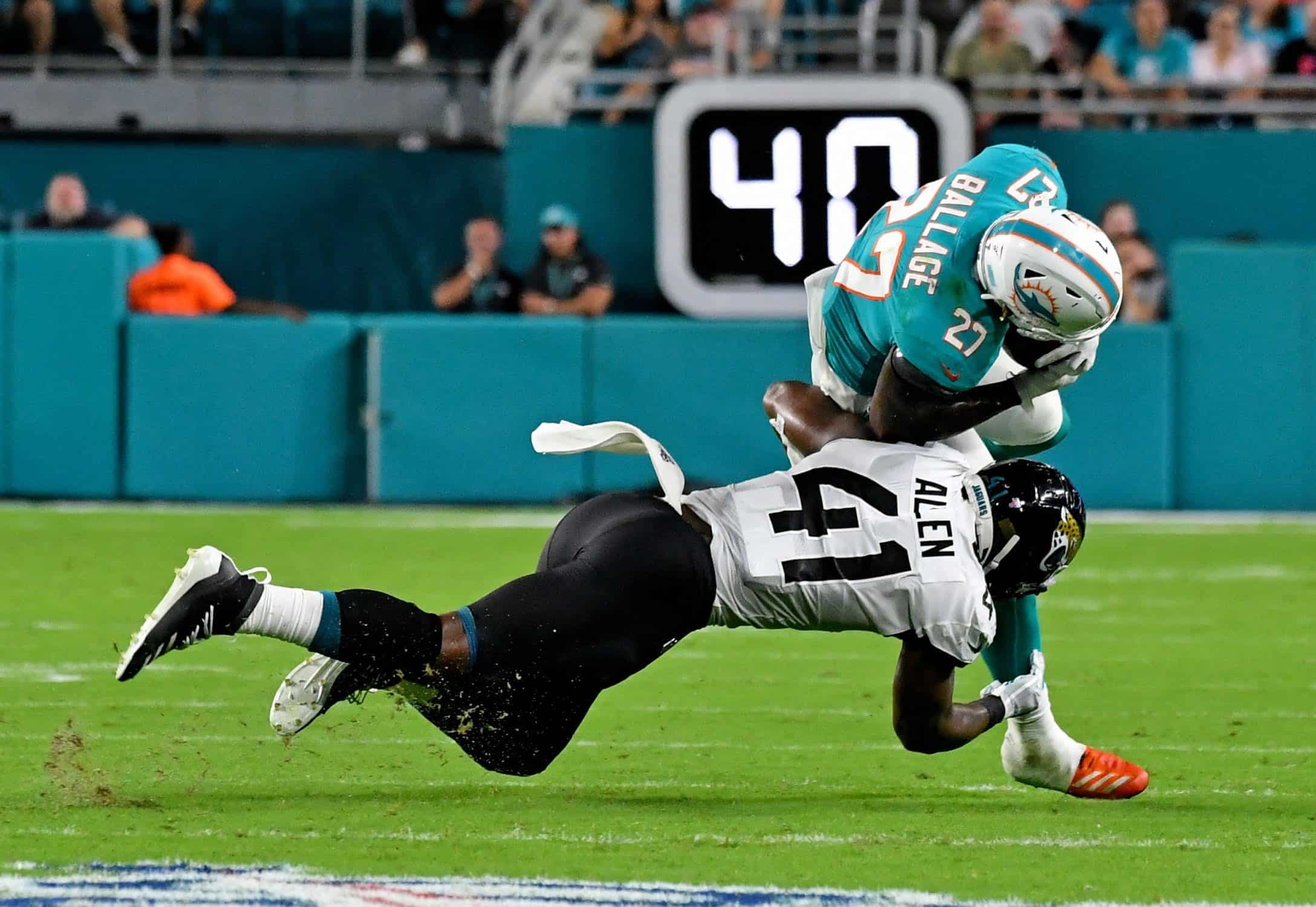 Most NFL fans know who Josh Allen is – no not the Buffalo Bills starting quarterback, but the Jacksonville Jaguars rookie seventh overall pick. Allen was a game-wrecker in the SEC last season and considered by many to be a top-five prospect in the 2019 NFL Draft. The Jaguars were licking their chops when Allen was available with the seventh pick and they had the chance to add him to a defensive front featuring Calais Campbell and Yannick Ngakoue.

There were few defenders better than Allen in college football last season and now he’s bringing his talent to Sunday’s in the NFL. In Week 3 of the preseason, Allen made himself known to the world against the Miami Dolphins. He tallied four tackles, two tackles for loss, two quarterback hits, and showed off his coverage ability in limited action. Basically, Allen made the Dolphins offensive line look like they had no idea what they were doing or how to stop him. It’s going to be a harsh season for the Jaguars in a tough division that plays the AFC West and NFC South, but Allen will give every NFL fan a reason to tune in.

No prospect in the country did more for themselves from their junior to senior season last year than Allen did at Kentucky. After a solid junior season, he looked like he could be a developmental pass rusher or even move full-time to an off-ball role in the NFL. The tape showed a raw height-weight-speed defender with no true home. Had he come out after the 2017 season, he likely wouldn’t have gone before the third-round.

As a senior for the Wildcats, Allen was one of the best players in the country. His versatility was always known, but the strides he made as a pure pass rusher turned him into a one-man wrecking crew in the SEC. Allen racked up 88 tackles, 21.5 TFLs, and 17 sacks on his way to winning the Chuck Bednarik Award, the Lott Trophy, the Bronko Nagurski Trophy, and the SEC Defensive Player of the Year award. Not too shabby for a two-star prospect who’s only other scholarship offer out of high school was to Monmouth.

What Allen did as a senior at Kentucky was incredible. His development as a pass rusher was crucial to his draft stock. Rather than rely on pure athleticism and bend, Allen learned to use his hands. He developed a speed to power, a swipe, a rip, and an arm-over move for when straight speed and dip on the outside didn’t work. Despite the pass rush production, he was still used in a hybrid role that took advantage of his rare coverage ability for a player of his size. Allen was often asked to matchup one-on-one with tight ends or pickup running backs out of the backfield. He was a true Swiss Army knife for Kentucky and the main reason they won 10 games in 2018, tied for their most since 1977.

Scheme fit with the Jaguars

When the Jaguars took Josh Allen seventh overall in the 2019 NFL Draft, two things were surprising. One was that he was still available and the other was that the Jaguars took him despite pass rusher not being a major need for them. Of course, taking the best player available is always a strong move, especially when they play one of the most important positions in football. Now the move makes more sense than ever with Ngakoue potentially hitting the open market after the season and Telvin Smith sitting out the 2019 season, Allen could be seeing a lot of playing time at off-ball linebacker.

The best way for the Jaguars to utilize Allen early on in his career is to take advantage of his versatility. Why pigeon hole him into one role or the other? Allow him to pin his ears back and rush the passer from the edge on passing downs, but on base downs, stick him at off-ball linebacker to add more athleticism and length to a strong front seven. He’s still developing as a pass rusher, but there are flashes of Danielle Hunter to his game. With his size, explosiveness, bend, violent hands, and non-stop motor, he has the tools to be one of the best young pass rushers in the league. That’s not all he is though, in an off-ball role, he draws comparisons to Anthony Barr for his size and movement skills in space. Get the most out of him by using him as a defensive chess piece.

Jaguars defensive coordinator Todd Wash has the players around Allen to best utilize his versatility. A defensive line of Campbell, Ngakoue, Marcell Dareus, and Taven Bryan on run downs with Allen next to Myles Jack at linebacker is a scary thought. Then having Campbell and Bryan/Dareus play inside while Ngakoue and Allen are on the edge for passing situations gives them one of the most athletic pass-rush groups in the league. Allen can move around to supplement this defense, a lot like Derwin James did as a rookie for the Chargers. He’s a Swiss Army knife, so use him as one.

How high should Jaguars fans expectations be of their rookie first-round pick this season? Well, right now Allen is tied for the fifth-highest odds to win Defensive Rookie of the Year at +1600. Assuming he’ll be playing both edge and outside linebacker for the Jaguars, he should see a ton of snaps. For the Jaguars defense to return to its dominance of two years ago, Allen will need to play a big role. Based on the preseason use of Allen and where the team lists him on the depth chart (backup defensive end to Ngakoue), he’ll probably start the season as a rotational hybrid player.

It won’t be long until Allen is playing starter snaps with the uncertainty in the Jaguars linebacker corps outside of Jack. They’re going to need his coverage ability and rare length whether it be at WILL or SAM. The plan has always appeared to be that they’ll use him heavily on passing downs as a situational rusher. It’s too hard to justify not having Ngakoue, Campbell, and Allen hunting quarterbacks together. A season of 50 tackles, 10 TFLs, and eight sacks certainly seems plausible. He’ll be affecting the game with his versatility in ways that won’t stuff the stat sheets. As long as the Jaguars use Allen as the Swiss Army knife he is, they’ll get the best out of him.

Going forward, the Jaguars’ offseason could play a major role in how they view Josh Allen’s future with the team. If Ngakoue signs a long-term contract somewhere else, then it’s likely they’ll want Allen taking over as their stud pass rusher. If Ngakoue is back and Telvin Smith doesn’t return to football, then continuing as their versatility hybrid could be more likely than locking down one spot. Either way, Allen has the tools and football character to be a long-time fan favorite with the Jaguars.

The end game for him will be as their pass-rushing star. If he continues to develop his pass rush moves and counter moves with his explosiveness and length, becoming a Pro Bowl level player will be in his future. For now, he’s their Swiss Army knife and a major factor in the team improving in 2019.

In this article:Featured, featured, Josh Allen