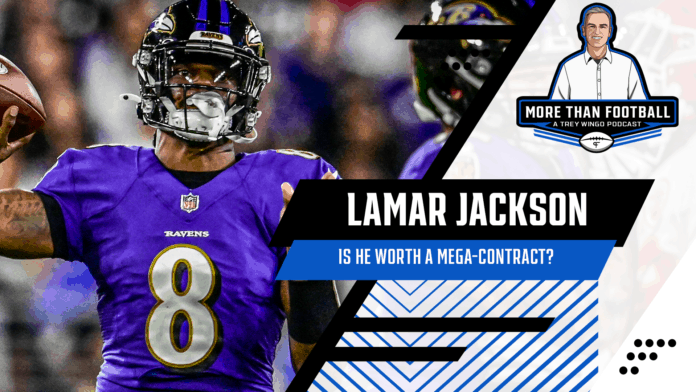 Is Lamar Jackson worth a mega-contract? (More Than Football podcast with Trey Wingo)

On this week's More Than Football podcast, Trey Wingo and Brett Yarris are joined by Randy Mueller to discuss Lamar Jackson's contract.

By Lucas Ellinas
October 1, 2021
What's in this article? Click to show
Negotiating with players who don’t have agents can be challenging
Potential concerns with signing Jackson long-term
Mueller and Wingo both think the deal will happen

Lamar Jackson and the Baltimore Ravens are trying to hash out a new contract for the MVP quarterback. PFN’s Chief NFL Analyst Trey Wingo and host Brett Yarris are joined by former NFL Executive of the Year Randy Mueller on this week’s More Than Football podcast to discuss Jackson’s contract situation.

Negotiating with players who don’t have agents can be challenging

One potential issue standing in the way of Jackson’s new contract is the star quarterback not having an agent represent him. Mueller points out several problems that can cause when negotiating.

The first is that you need to be extremely careful when talking to family members. They might take what you say personally. Professional agents understand that it’s all just business, but those unfamiliar with negotiating might take offense.

Additionally, Mueller points out that he’s “always dealt best with agents who are the most educated.” And when dealing with inexperienced negotiators, you often need to educate them on how the process works.

However, Mueller seems to think these issues aren’t necessarily going to be huge barriers. After all, Lamar and those close to him negotiated his first contract, so they should be relatively comfortable with doing so again at this point.

Wingo and Mueller push back against the narrative that defenses have figured out how to stop Jackson. Mueller suggests that “you can’t stop what you don’t know is coming,” and Wingo calls him “the cheat code.” But that doesn’t mean there aren’t potential problems with giving him a big contract.

Mueller is concerned that Baltimore’s offense isn’t creative enough to sustain itself for an entire season. He doesn’t think “there’s enough options to sustain it for that long.”

He believes the second half of the season “is all about coaching and making adjustments,” and worries the Ravens aren’t capable of being that flexible.

Wingo discounts any concerns about Jackson’s playoff success, stating that “teams win playoff games,” not individuals. However, he brings up a couple of other potential pitfalls. First, injuries. Jackson hurt himself last week cartwheeling into the end zone. How long will he last playing such a physical style of offense?

Perhaps more importantly, he wonders if this Baltimore offense can really succeed in what is clearly a pass-heavy league. Other than the Ravens, even the most run-heavy teams (like the Cleveland Browns or Tennessee Titans) have quarterbacks who can make big throws when necessary. It remains unknown whether Baltimore can run a truly complex passing game with Jackson at the helm.

Mueller and Wingo both think the deal will happen

Ultimately, both Mueller and Wingo think the two sides will work past their issues and a deal will get signed. The suspicion is that a shorter-term contract might best satisfy both parties. However, they have slightly different logic. Mueller thinks the Ravens “don’t have a choice.” The team has built their entire roster around Jackson, effectively locking themselves into his playstyle. Furthermore, they haven’t attempted to draft a contingency plan of any kind.

Mueller: “We’re not going to see any different Lamar all of a sudden show up next week or next month.” They can’t just replace Jackson with someone like Tyrod Taylor — re-signing Jackson is really the Ravens’ only option.

Mueller worries that Baltimore might be forced to make an unfavorable deal because they’ve effectively backed themselves into a corner.

Wingo, meanwhile, is confident the Ravens will find a way to move money around to re-sign Lamar. The salary cap is never as set as it appears, with Wingo referring to a team’s budget as “funny money.”

Wingo sees no reason that the deal can’t happen. We’ll find out if Mueller and Wingo are right and Baltimore and Jackson can come to an agreement.