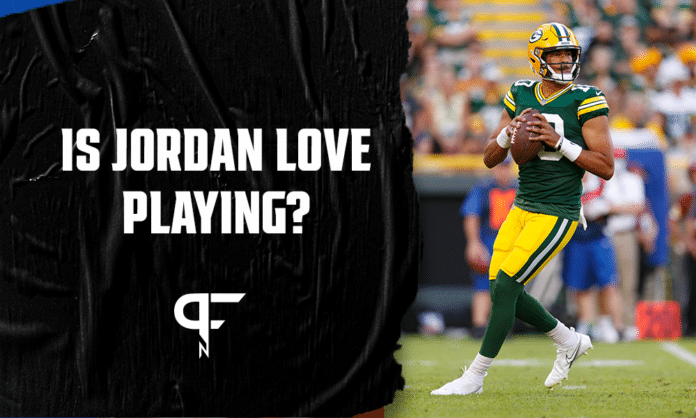 Is Jordan Love playing in the Packers' final preseason game against the Bills? It seems so, but Matt LaFleur wasn't completely committed.

By Dalton Miller
August 28, 2021
What's in this article? Click to show
Is Jordan Love playing today?
Aaron Rodgers on joint practices: “Saleh threw a lot of things at us”
The importance of Buffalo playing starters for Love

Jordan Love suffered an injury during the first preseason game but did return to Packers practice this week. Is Love playing in the team’s final preseason game? The Packers face the Buffalo Bills in the third and final week of preseason action. If he plays, could he see extended time?

Update: Love is starting for the Green Bay Packers against the Buffalo Bills in the last preseason game of the season.

Apparently, the third week of preseason is when coaches stop giving concrete answers about whether players will play in the final preseason game. The general consensus is that Love is playing in the preseason finale, but LaFleur won’t say for sure.

If Love plays, LaFleur says it would be for a half or even into the third quarter. That’s quite the hypothetical pitch count for someone he’s not even sure will play at all.

Aaron Rodgers on joint practices: “Saleh threw a lot of things at us”

For some reason, maybe because the new Aaron Rodgers loves nothing more than to engage with the media, he’s become the subject matter expert on Love. He believed that Love missing the joint practices against the Jets was more detrimental to Love’s development than missing the previous preseason game.

“Because (Robert) Saleh threw a lot of things at us. That, to me, is more important than the game. Now the first week, the Texans didn’t play a whole lot on defense. They played some vanilla coverages. It would have been better (to play) against the Jets.”

Rodgers’ assessment of the young quarterback appears spot-on. When Love plays in rhythm, he’s as impressive as it gets. When things get a bit off-kilter, and he has to reset to get his sequencing right — that’s when things can get hairy. It’s why the ability to freestyle has become so important.

The importance of Buffalo playing starters for Love

Rodgers said the Bills are expected to play starters. That would be huge for Love. He could very well be the Packers’ starting quarterback heading into the 2022 NFL season. Getting starting reps against a good defense will paint the Packers a picture of the future, and the organization will be hoping it’s as beautiful as a Bob Ross classic.