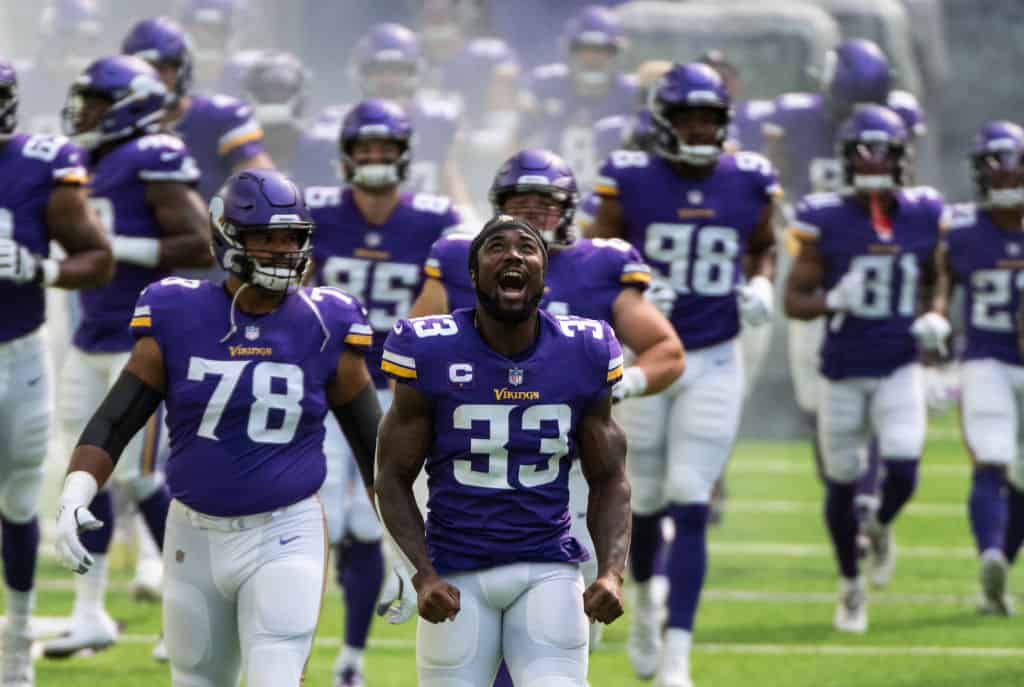 MINNEAPOLIS, MN - SEPTEMBER 27: Dalvin Cook #33 of the Minnesota Vikings and his teammates take the field before the game against the Tennessee Titans at U.S. Bank Stadium on September 27, 2020 in Minneapolis, Minnesota. (Photo by Stephen Maturen/Getty Images)
What's in this article? Click to show
Dalvin Cook, and the Vikings’ offense, put it all together in Week 3
In Week 4, the Vikings RB gets an exploitable Houston Texans matchup
Dalvin Cook is a top-three fantasy option in Week 4

All we want in fantasy football is to see players stay healthy and show us their extreme talent. This is what plagued Dalvin Cook in his first few seasons in the NFL. Never able to stay on the field, it was always “what if” statements when talking about how good he could be as an NFL player and as a fantasy asset.

In 2019, he put it all together in a season that catapulted him up boards as well as earning him a massive payday. Heading into a Week 4 matchup against the Houston Texans, is Cook the top fantasy football running back option for the week?

Dalvin Cook, and the Vikings’ offense, put it all together in Week 3

After a dreadful start to the season, the Minnesota Vikings offense discovered its firepower against the Tennessee Titans, with Dalvin Cook leading the charge. The Vikings’ stud RB racked up 199 total yards and a score in Week 3, mostly on the ground. Cook rushed 22 times for 181 yards (NFL-high for 2020) and a touchdown. He also caught two of his five targets for an additional 18 yards. The 8.2 yards per carry averaged by Cook was a career-best in a game with at least 11 carries.

His touchdown on Sunday was his fourth on the season, tied for the top spot in the NFL. Cook is carrying the momentum he gained in 2019, where he finished the year with 13 rushing touchdowns, fourth-most in the league. His scoring plus his 1,654 all-purpose yards in 2019 was rewarded with a lucrative contract in the offseason. The Vikings signed Cook to a five-year, $63 million contract, the fifth-highest per year at the running back position.

If there is one aspect of his game that is behind in 2020, it is his receiving work. Currently, Cook has five receptions on nine targets for 24 yards. He is on pace for 48 targets on the season, a significant step down from his 63 we saw in 2019. However, Cook’s weekly value is not predicated around the passing game; it is merely a bonus to what is already one of the game’s best fantasy assets.

In Week 4, the Vikings RB gets an exploitable Houston Texans matchup

After a 199 total yard performance in Week 3, Cook and the Vikings have another exploitable matchup in Week 4 against the Houston Texans. The Texans’ defense has been obliterated against the run. In Week 1, it was Clyde Edwards-Helaire who rushed 25 times for 138 and a touchdown. Then it was the combined efforts of Mark Ingram and Gus Edwards, who rushed 19 times for 128 yards and a touchdown. Last week, it was James Conner, rushing 18 times for 109 and one touchdown.

Cook is the most well-rounded running back of them all and should continue this trend in Week 4. The one thing Cook needs is the passing game of the Vikings to play like they did last week. It kept the Titans’ defense honest and couldn’t allow them to stack the box against Cook. He faced a stacked box (8+ men in the box) on 16.67% of his carries. Unless a team fully commits to containing Cook, he has the skillset to surpass 100 rushing yards every time he steps on the field.

Dalvin Cook is a top-three fantasy option in Week 4

Between the matchup and his talent, I have a hard time finding how Cook struggles in Week 4. One of the reasons Cook is succeeding is that he is seeing a massive snap share disparency to Alexander Mattison, who, in his own right, would be a low-end RB1 if Cook missed time. Cook has out-snapped Mattison 121 to 45 through three weeks.

Ride the momentum while you can and lock Cook into your fantasy lineups this week.