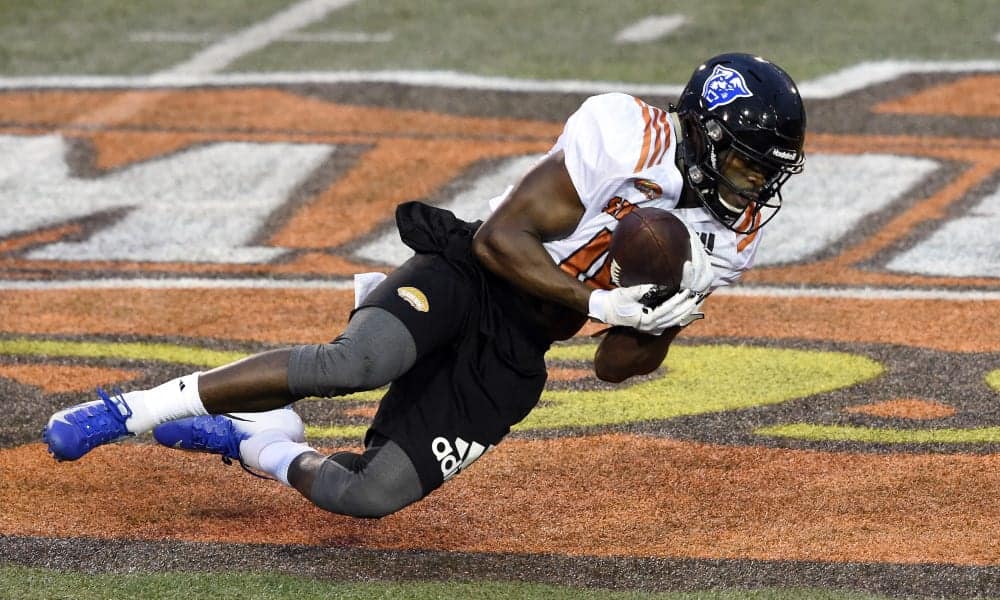 The Indianapolis Colts may have found themselves a gem in undrafted Penny Hart. Hart first popped up on most draftnik radars with his breakout performance during the 2019 Senior Bowl Week.  The diminutive receiver (5’8″, 180) stole the show throughout the week earning rave reviews from nearly everyone in attendance.  He decisively outplayed fellow wide receiver Andy Isabella, who was projected as a day-2 prospect. As a result, he appeared poised to ascend draft boards across the league.

However, then came his pro day.  Hart would post disastrous results in practically every test confounding many of his newfound fans.

Consequently, his poor pro day performance was likely the primary reason he went from middle-round hopeful to undrafted free agent. While extremely unfortunate for Penny Hart, it could be a blessing for the Indianapolis Colts.

Penny Hart may have tested as a poor athlete, but you cannot tell from seeing him play. In the games I reviewed Hart appeared quick, agile, and explosive. He possesses fantastic feet which, along with very economical footwork, enable his razor-sharp routes. His releases are dynamic and his change-of-direction is sudden.

As noted above by Ben Fennell, Hart also possesses exceptional ball skills. He routinely catches balls away from his frame while featuring a catch radius much larger than expected for his size.

Hart is also a legitimate threat in the open field displaying good vision while being difficult to bring down. Evidenced by Georgia State using Hart as both their primary punt and kick returner in 2018. His 17.3 average per punt return is surely something that fuelled the Colts’ interest.

Aside from the obvious concerns with his lack of size and athletic testing results, Hart has struggled with drops. Pro Football Focus credits him with 26 over his 4-year career at Georgia State. From the games I reviewed, they appeared to be of the concentration variety. Sometimes he takes his eyes off the ball before securing the catch. This is a discipline issue that will have to be addressed by Colts’ wide receivers coach Kevin Patullo.

Heading into 2019, the Colts have three locks to make the roster in T.Y. Hilton, Devin Funchess, and 2019 2nd-round pick Parris Campbell.  If Deon Cain can return to his 2018 pre-injury form, he would likely secure the 4th spot. That leaves potentially 1-2 spots with incumbent Chester Rogers the early favorite.

The path for Penny Hart to the 2019 roster may actually be beating Rogers out in the return game. In 2018 the Colts had lackluster results in both kick and punt returning with Rogers being primarily responsible for the latter. If Hart can bring his dynamic open field ability to the return game this summer he could well earn himself an opening week roster spot.

In this article:Featured, featured, Penny Hart