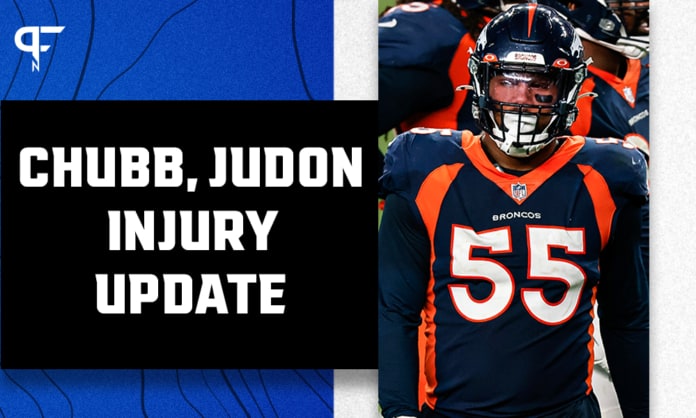 Those two pieces of news certainly were helpful to the New York Jets and New Orleans Saints, who play in Denver and Foxborough, respectively, this weekend.

Chubb’s timeline — six to eight weeks — was actually about as good as the Broncos could have expected. He was visibly upset when the injury occurred in the second quarter of Denver’s Week 2 win over the Jaguars.

Chubb — who had missed the last 12 games of the 2019 season with a torn ACL — chucked his helmet in frustration when he went to the sideline on Sunday.

Chubb speaks on the injury

“I know that this team is a special team,” Chubb said in a video posted to the Broncos’ Twitter account. “It was during that two-minute drive, I tried to turn the corner and just felt it wasn’t all the way there. I’ve been dealing with this bone spur that I’ve got in my ankle, and sometimes when I try to turn the corner, it gets a little annoying. Feels like a stab-type pain.”

Chubb, who has 20.5 sacks in 35 career games, continued: “… These past couple of years haven’t been going our way in the win column, and I feel like we’re starting to change that, we’re starting to get over that hump. Not being able to be there is going to be frustrating, but I’m going to push everything I can to get back to these games, and hopefully, it’s sooner rather than later. My mindset is just going to be attack it 100% every day.”

“When this thing is healed up, I expect to see a whole new Bradley Chubb.”

Chubb added that he hasn’t felt completely healthy since 2018. That was also the last time Denver got a full season from both Chubb and Von Miller. On paper, the Broncos have a terrifying pass rush. But they just haven’t been able to put it together due to injuries.

With Chubb out until November, expect to again see a lot more out of Malik Reed. Reed had 8 sacks in 13 starts last year playing in place of Miller, who sat out the entire season with a significant ankle injury.

As for Judon, he pulled himself out of the Patriots’ win over the Jets late in the game with an unspecified injury. Presumably, it involved his knee, as he didn’t appear on the Patriots’ Week 2 injury report, suggesting it’s a new issue.

Judon, who joined the Patriots on a four-year, $56 million free-agent contract during free agency, was effective in his first two games of the season.

Judon has a sack and 4 pressures in 98 defensive snaps on the season. If he cannot play against the Saints Sunday, expect a heavy workload for Josh Uche and Kyle Van Noy, who practiced fully Wednesday after missing the Jets game with a throat injury.