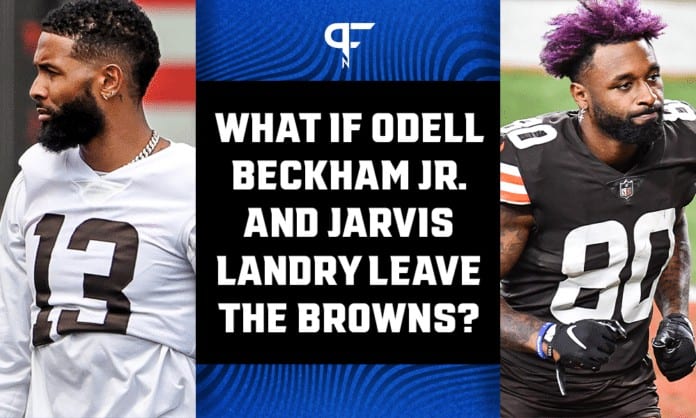 If the Cleveland Browns cut bait with Jarvis Landry and Odell Beckham Jr., who could they select to replace them in the 2022 NFL Draft?

In Jarvis Landry and Odell Beckham Jr., the Cleveland Browns have arguably one of the best wide receiver tandems in the NFL. When they’re on form, each can be a game-changing playmaker. Together, they should be an unstoppable force.

However, it hasn’t worked out that way in Cleveland. As a result, there’s the potential that one, if not both, find themselves no longer with the franchise before next fall. If that proves to be the case, which wide receivers could the Browns target to replace them in the 2022 NFL Draft?

Could the Browns cut bait with Beckham Jr. and Landry?

It doesn’t seem like five minutes have gone by since Beckham Jr. announced himself on the national stage with his backward-diving, one-handed catch for the New York Giants against the Dallas Cowboys. Unbelievably, it’s seven years since that groundbreaking play paved the way for the enigmatic wide receiver to become one of the best in the game.

In his first three seasons in the league, Beckham Jr. tallied over 4,000 yards while securing double-digit touchdowns each year. Since then, however, he’s battled multiple serious injuries, never scored more than 6 touchdowns in a year, and was traded by the Giants to the Browns.

The trade allowed Beckham Jr. to link up with former LSU teammate Landry in Cleveland. A focal point of the Miami Dolphins’ offense after being drafted in the second round in 2014, Landry racked up consecutive 1,000-yard seasons before being traded to the Browns for 2018 and 2019 NFL Draft picks.

Do Beckham Jr. and Landry provide value for money?

Their first year together yielded spectacular results. Beckham Jr. notched the fifth 1,000-yard season of his career while Landry tallied a career-high 1,174 yards. Despite this, you could argue that the Browns haven’t seen the wanted ROI out of either of them. They sit at the top of Cleveland’s salary cap, with Beckham costing $15.75 million against the cap.

While injury mitigated Beckham Jr.’s contribution last season, it’s a massive chunk of change invested in the position, especially when you consider that it was running back Kareem Hunt who led the team in receiving touchdowns a year ago.

If the Browns wanted to shake up the receiving room and invest the cap space elsewhere, the end of this season would be an opportune time to do so. Both Beckham Jr. and Landry have extremely moveable contracts.

As of next year, Beckham Jr. will have no dead cap space attributed to his contract. Furthermore, Landry’s contract has just $1.5 million in dead money. However, they’ll account for just over $31.5 million of the Browns’ 2022 cap if they’re both on the roster next season.

With a lack of availability for Beckham Jr. and a perceived lack of value for both wide receivers, the 2022 NFL Draft would provide a perfect moment to rebuild and retool the Browns’ offense.

You could argue that process has already begun since Kevin Stefanski arrived in Cleveland. In the 2020 NFL Draft, they added the 6’2″, 212-pound Donovan Peoples-Jones. A big-bodied boundary threat, he was the clear WR2 in the Browns’ season-opening thriller against the Chiefs. DPJ played 80% of Cleveland’s offensive snaps, just 4 snaps fewer than Landry.

Meanwhile, they added Auburn speedster Anthony Schwartz in this year’s draft cycle. A versatile weapon who can stretch the field while making yards after the catch in the short game, Schwartz surprisingly saw the third-most offensive snaps amongst Cleveland wide receivers in Week 1.

Before looking at some potential NFL Draft targets for the Browns, it’s worth noting what Stefanski’s offense requires in a receiver. Cleveland uses one of the most 12 personnel-heavy offenses in the NFL — meaning one running back and two tight ends — with two receivers making up the remainder of the offense.

Last year, Cleveland ran 28% of their total plays out of 12 personnel. In the 2021 season opener, 65% of their plays utilized two-tight end sets.

So, typically, the offense requires a receiver who can stretch the field vertically and take advantage of the space created in the short and intermediate areas of the field.

While the 2022 NFL Draft class doesn’t contain WRs with the profile of Alabama’s Jaylen Waddle and DeVonta Smith, or LSU’s Ja’Marr Chase, there’s an exciting and deep pool of pass catchers in the upcoming class.

Ohio State’s dynamic duo of Chris Olave and Garrett Wilson would perfectly fit Cleveland’s offense. Olave’s explosion at the line of scrimmage gives way to track speed enabling him to be an impressive deep threat. Wilson lacks the same top-end speed, but excels at the catch point, is a savvy route runner, and can make plays after the catch.

However, Cleveland currently predicts to select late in Round 1. Therefore, neither receiver may be available to replace Beckham Jr. or Landry. Thankfully, for the Browns, there are multiple early-round options to meet their needs.

Another Crimson Tide pass catcher is set to enter the NFL next season. If the Browns want to secure a field-stretching deep threat, then John Metchie III may be their man. His speed and route-running ability make him a genuine threat at all three levels of the field.

Additionally, Metchie has been used from multiple alignments at Alabama. For Cleveland, he could line up out wide in 12 personnel or from the slot in 11 personnel.

If you’re looking for a deep threat, they don’t come much more threatening than Nevada’s Romeo Doubs. The Wolf Pack wideout averaged 17.3 yards per catch last season, the most of all receivers who tallied 1,000 receiving yards. Doubs is explosive and speedy, with exceptional ball-tracking prowess to supplement his athletic traits.

Although Purdue’s David Bell lacks the top speed of some of the NFL Draft prospects mentioned so far, he’s no less of a field stretcher. His speed release allows him to create separation at the line of scrimmage. Furthermore, he can still take the top off a defense despite not being the fastest in a foot race.

It’s easy to focus on the first round when discussing draft prospects to replace Beckham Jr. and Landry. Yet, the draft is so much more than opening night. In this 2022 NFL Draft class, there’s wide receiver talent scattered throughout all seven rounds.

South Alabama’s Jalen Tolbert has been the subject of early mock-draft selections for the Browns. His excellent long speed for his 6’3″ size makes him an intriguing deep threat. Yet, Tolbert also wins in the short passing game, with an elusiveness after the catch to turn the short stuff into something substantial.

Boston College wide receiver Zay Flowers is another name linked to Cleveland early in the process. Slightly smaller and slighter than Beckham Jr. and Landry, Flowers is a dangerous playmaker regardless. His speed, shiftiness, and insane lateral agility render his opponents useless at any level of the field.

In the mid-to-late rounds, some other names to consider include Penn State’s Jahan Dotson, Indiana’s Ty Fryfogle, UCLA’s Kyle Phillips, and Rutgers’ Bo Melton. They all have similar size, weight, and athletic profiles to Beckham Jr. and Landry.