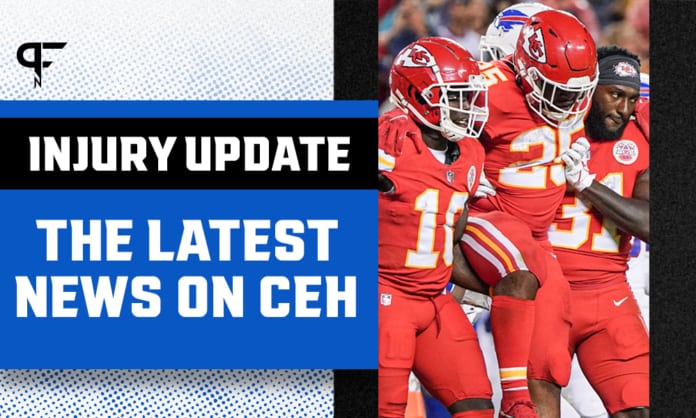 How long is Chiefs RB Clyde Edwards-Helaire expected to be out with his MCL injury, and what will the backfield look like until he returns?

In the second half of a rainy Sunday night game against the Buffalo Bills, Chiefs RB Clyde Edwards-Helaire exited with a scary-looking leg injury. How will this affect the fantasy football landscape? Let’s discuss the nature of his injury, the duration of his expected absence, and what the Chiefs’ backfield will look like until he returns.

Clyde Edwards-Helaire Injury Update: How long is the Chiefs RB out?

When I first saw the replay of Edwards-Helaire’s injury, it reminded me of what happened to David Johnson in Week 17 of the 2016 season. Both players’ legs were trapped beneath them while the force of the defenders made them essentially sit back in a manner they’d never be able to do on their own.

Johnson was later diagnosed with a sprained MCL, so my guess was CEH might be dealing with the same injury. The day after the game, Ian Rapoport reported that is indeed the case. As a result, Edwards-Helaire is certain to miss multiple weeks. The question is, how many?

Update 10/12: The Chiefs placed Edwards-Helaire on IR. He will be out a minimum of 3 weeks, but as discussed below, it will likely be a little bit longer than that.

What week could Clyde Edwards-Helaire return?

An MCL sprain is typically a 4-6 week injury. We’ve seen players at other positions play through it, most notably quarterbacks. Running backs and wide receivers tend to miss more time with sprained MCLs. We do not have a confirmed expected timetable on CEH’s return, but it’s fair to assume he’s missing at least two weeks.

Whenever multi-week injuries occur midseason, it’s crucial to look at bye weeks as teams will often use them as a bonus recovery week to ensure players return to full health. The Chiefs have a Week 12 bye. If Edwards-Helaire’s injury falls on the longer end of the MCL sprain timeline, they would likely hold him out until Week 13.

The hope would be that Edwards-Helaire can return after just a two or three-week absence. However, if he does not play by Week 10, it stands to reason the Chiefs won’t bring him back for just one game before a week off. Instead, they’ll rest him in Week 11, allowing him an additional three full weeks of healing.

Is there any good news surrounding Edwards-Helaire’s injury prognosis?

I’ve been making it a point in life to be more positive whenever possible. So, let’s look at the positives.

It’s certainly possible that Edwards-Helaire avoided a more serious injury. He could return on the front end of the typical MCL sprain timeline.

What will the Chiefs’ backfield look like until CEH returns?

Following CEH’s departure, Darrel Williams was the clear lead back. Jerick McKinnon will undoubtedly be involved, but expect Williams to handle the bulk of the carries. McKinnon will mix in on passing downs.

The final snap share for Sunday night’s game was 43% for Williams and 31% for McKinnon. That corresponds with what I expect will be a 60-40 split going forward.

The Chiefs definitely like Williams on passing downs because of his blocking ability. Yet, historically, Andy Reid’s passing-down back is simply anyone that isn’t his early-down back. That leads me to believe we will see more of McKinnon on passing downs as Williams is the primary ball carrier.

Williams has a chance to be a low RB2/flex play, especially with bye weeks coming up. Meanwhile, McKinnon could be a desperation last-minute starter on fantasy rosters in PPR leagues.