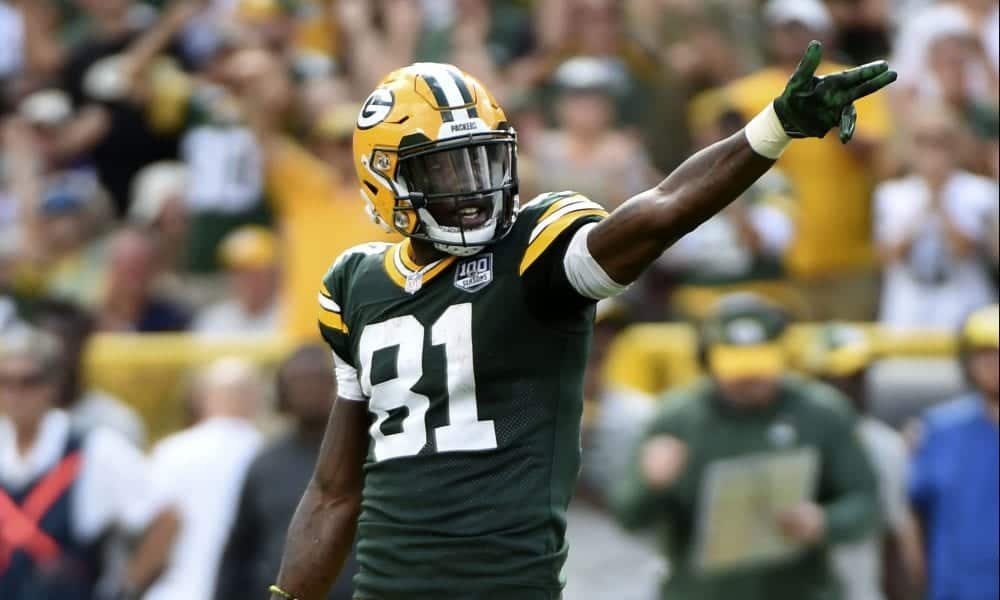 Photo Credit: Packers Wire
What's in this article? Click to show
Davante Adams was 134 yards away from breaking the Green Bay Packers single-season record for receiving yards in 2018. Their next leading receiver, Jimmy Graham, however, had less than 650 yards. For Green Bay to return to relevance in 2019, they need more consistent play from their supporting pass catchers.
Geronimo Allison
Marquez Valdes-Scantling
Jace Sternberger

Davante Adams was 134 yards away from breaking the Green Bay Packers single-season record for receiving yards in 2018. Their next leading receiver, Jimmy Graham, however, had less than 650 yards. For Green Bay to return to relevance in 2019, they need more consistent play from their supporting pass catchers.

Many believed the Green Bay Packers would invest heavily in the receiver position during the draft because of the lack of production from that group in 2018. Through the first few rounds, they had their chance at some of the top tier receiver prospects like D.K. Metcalf and A.J. Brown. They ultimately spurned the opportunity to draft a receiver, only selecting one pass catcher the entire draft: tight end Jace Sternberger out of Texas A&M.

The decision not to draft or sign a receiver in free agency makes it clear that the organization believes in the players already in-house. At least one of those guys on their roster, outside of Adams, needs to step up in 2019 if Green Bay has any chance of competing in the NFC. Here are the three most likely candidates to bring that production in 2019:

Through his first two seasons in the NFL, Allison posted modest numbers; nothing groundbreaking. That was mostly because the opportunities he was given were limited. It was evident when he was on the field that he had the potential to grow into a legitimate threat for Green Bay’s offense. The more reps he received and the more comfortable he became with the playbook, his rapport with number 12 began to blossom.

With the departure of Jordy Nelson, there were high hopes that Allison could step into Nelson’s role in 2018. While there was no expectation that he would pick up from where Nelson left off, his 6’3 frame and 4.67 speed is comparable to Nelson and made him a perfect candidate for that role in Mike McCarthy’s offense. A tear in his adductor muscle, however, limited him to just five games in 2018.

Now fully recovered and ready for the 2019 season, the high hopes for Allison are back. With the season still months away, it’s unclear what his role will be in Matt LaFleur’s offense. He has played a mix of outside and slot receiver his first few years in the league. And while his size would point to his role being on the outside, LaFleur has a history of preferring bigger slot receivers. There is one thing that is definite about Allison, though. If he can live up to his potential, Green Bay could reclaim their status as one of the league’s most potent offenses.

If you paid close attention to the NFL Draft, you more than likely heard the term “height weight speed” thrown around quite a bit. The term is pretty straightforward – looking at how a prospect’s height and weight relate to speed. But very few prospects possess elite levels of each of these attributes. Marquez Valdes-Scantling is one of the rare players that has all three.

At 6’4 206 lbs, Valdes-Scantling ran a 4.37 at the 2018 NFL combine. His vitals scream big play ability, and that is why Green Bay took him in the fifth round in 2018. He immediately showed promise, catching 38 passes for 581 yards and two touchdowns in year one.

Now with a full offseason to work with Aaron Rodgers, Valdes-Scantling could see a lot of growth from year one to year two. The big play ability with his size and speed paired with Rodgers’ deep ball ability could be a gamechanger in Green Bay’s offense.

There was a lot of talk linking Green Bay to receiver D.K. Metcalf before the 2019 draft. One possible explanation for why they passed on him? They believe Valdes-Scantling can be their own D.K. Metcalf.

As mentioned earlier, Sternberger was the only pass catcher selected by Green Bay in the 2019 draft. And while he is listed at tight end, his most dominant traits are as a receiver. Our own Shane Tyler broke down Sternberger’s game in the PFN Film room.

His role may be limited in 2019 with Jimmy Graham ahead of him on the depth chart, but with the amount of talent he possesses, the coaching staff would be foolish to keep this guy on the sidelines for too long.