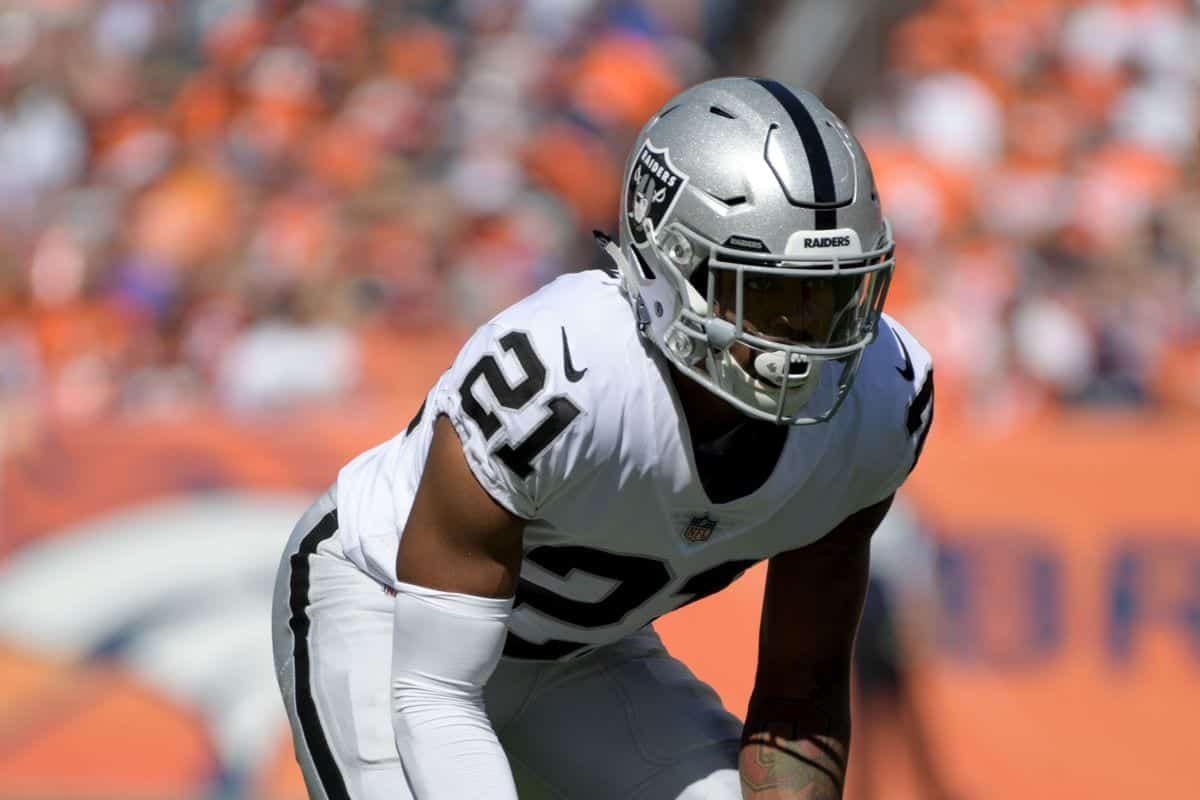 Photo Credit: Kirby Lee - USA TODAY Sports
What's in this article? Click to show
Conley’s NFL career got off to a turbulent start
2018 saw a shaky start for Conley
The 2019 Raiders defense is set to be much improved
The improvements made by the Raiders will allow Conley to showcase his skillset

Gareon Conley hasn’t had the most straight forward start to his NFL career. Highly rated as a junior coming out of Ohio State, Conley’s draft stock took a hit when he faced allegations of sexual assault. After vehemently denying the allegations, and passing a polygraph test, the Oakland Raiders took a chance on Conley with the 24th pick of the 2017 NFL Draft. Is 2019 the season that Conley repays that faith, and realizes his potential as a top cornerback in the league?

Conley’s NFL career got off to a turbulent start

After putting the nightmare of the sexual assault allegation behind him, Conley put pen to paper with the Raiders on July 29th 2017. He was immediately placed on the physically unable to perform (PUP) list, however, after picking up a shin injury in rookie mini-camp. The injury would dominate his rookie campaign.

Despite being activated off the PUP for the final pre-season fixture, he would miss the season opener against the Tennessee Titans. Raiders fans would get a glimpse of what to expect from Conley in the week two victory over the New York Jets. He logged his first pass break up and tackles of his career. He then added three more tackles the following week.

However, an aggravation of the shin injury that had blighted his pre-season ended his season. The hopes that their highest draft pick would be a key contributor from day one were gone. Those who had questioned his selection were quick to label him a draft bust.

With a full off-season to recover from his 2017 difficulties, Conley was expected to shine in the Oakland secondary. Early on in the season, however, he struggled. In particular, he was having issues in the tackling game. His lack of physicality at the point of tackle saw him give up big plays and led to him to being benched. At the time, Raiders defensive coach Paul Guenther attributed his tackling problems to his injury lay off:

“He struggled some in the beginning of the season. I think a lot of that had to do with his lower body strength, just coming off the recovery of his injury where he was more rehabbing early in the year”

In the second half of the 2018 season, Raiders fans began to get a glimpse of what Conley can achieve. He led the team in passes defended with 15. With three interceptions, he tied with Marcus Gilchrist for the most on the team. Those interception numbers were the same as Jalen Ramsey and Darius Slay, who are regarded as among the best. After rotating outside cornerbacks throughout the season, Conley emerged as a true number 1 cornerback. The problem for the Raiders, and Conley, was that the defense as a whole in 2018 was sub-standard.

The 2019 Raiders defense is set to be much improved

Herein lies the key to Gareon Conley’s success in 2019. There’s no doubting his ability as a player. That was evident as he came out of Ohio State. There were some special cornerback talents in that 2017 NFL Draft class. At the time, Mike Mayock had Conley rated as the second-best cornerback.

The cornerbacks that were taken ahead of him, and even some taken behind him, have made big impressions in the league. The likes of Marlon Humphrey, Adoree’ Jackson, Tre’Davious White, and Desmond King have arguably better reputations in the league than Conley.

His Ohio State teammate, Marshon Lattimore, is regarded as one of the best. You could argue that in their final season together at Ohio State, there wasn’t a lot to choose between the two. Statistically, they had the same interception numbers. It was Conley who was best in the nation in terms of passer rating allowed.

Life as a cornerback is made harder when your defensive line doesn’t put any pressure on the quarterback. The Raiders made moves in the draft to address their 2018 pass rush problems. With the additions of Lamarcus Joyner, Johnathan Abram, and Trayvon Mullen, the secondary is in a lot better shape too. The new veteran linebacker group will provide additional run support. This will reduce the amount of run defense that will be required by Conley. That, in particular, is an area in which he has never excelled.

Where he does excel is in man coverage. He uses his excellent speed to stay with wide receivers. He then uses his positioning and ball skills to make a play on the ball. This was particularly evident in last seasons game against the Kansas City Chiefs.

Patrick Mahomes has arguably the best deep throw in the league, and Tyreek Hill has speed for days, but Conley makes the play perfectly (video here). These are the types of plays that, if given the opportunity, he can make every week.

He may have had a turbulent start to his career, but 2019 will be the season that Gareon Conley gets the recognition that he deserves.