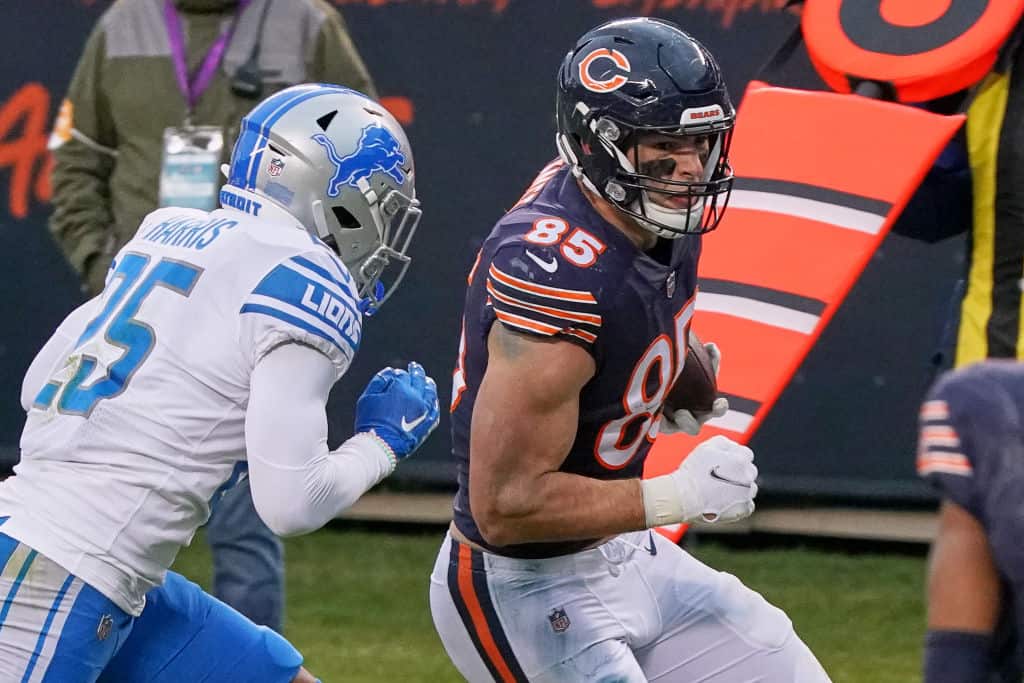 CHICAGO, IL - DECEMBER 06: Chicago Bears tight end Cole Kmet (85) runs with the football in action during a game between the Chicago Bears and the Detroit Lions on December 06, 2020, at Soldier Field in Chicago, IL. (Photo by Robin Alam/Icon Sportswire via Getty Images)
What's in this article? Click to show
Washington offers three sleepers that could help you on your playoff push in Week 14
Is Cole Kmet now a starting fantasy tight end?
Week 14 Wide receiver sleepers that can improve your depth for the fantasy playoffs
Want more fantasy football analysis and news?

The fantasy football playoffs are here, and your season is on the line. Sure, you have the stalwarts that carried you here, but entering Week 14, finding those sleepers can be crucial in the fantasy playoffs. Granted, if you made it this far, someone like Chicago Bears TE Cole Kmet might never see your lineup, but if you end up with a late weeks scratch, he can potentially save your chances. Let’s take a look at some of Week 14’s best fantasy playoff sleepers.

Anytime I do some kind of sleeper or waiver content, written, podcast, or video content, I usually do it with some sort of cap in terms of rostership. I can sit here and recommend Christian McCaffrey (well, maybe), but unless you are in the 1% of leagues in which he is out there, no one benefits. Normally I keep the cap at 50%, but since this is playoffs, I will mention some people who could be out there who are just over that number, such as the first person I will bring up.

There is no reason that JD McKissic should be out on waivers right now. He isn’t even a sleeper. What he is though, is a starting running back who has seen substantial work in the passing game all year, and his team’s leading running back is likely down for the count.

Learn from what happened with Mike Davis and James Robinson earlier in the year. If you can get a starting RB, do it and do it swiftly.

Since Week 8, JD Mckissic is the RB12 in fantasy. He isn’t a sleeper, but he is a must-add going into the fantasy playoffs for Week 14.

While not the flashy option, Peyton Barber is a useful addition to your fantasy team heading into Week 14. With Gibson out of the way due to turf toe, Barber will serve as the leading ball carrier. He can not do the things that Gibson could. However, take the volume where you can find it. He scored last week but also averaged 1.6 yards per carry. Which I think is a prime example of what Peyton Barber is as a rusher. Inefficient but with a chance to salvage his day with a touchdown. The likelihood to see 12-14 carriers plus goal-line work makes Barber an intriguing addition.

Washington has found something with Logan Thomas. Thomas’s nine receptions ad 98 yards were the most he has had this season, and his nine targets were his most since Week 2 against the Cardinals. Plus, he has now found the end zone in consecutive weeks. Yes, the San Francisco 49ers are a difficult matchup against the Tight End, but do you know who else is? The team he just walked over. Thomas’s one game accounts for over 21% of the season total the Steelers had allowed and is 50% of the touchdowns given up.

When looking at how positions affect each other, there is a strong correlation between the RB and TE targets. With Gibson out, expect to see Logan Thomas see a slight uptick in targets. He is a low-end TE1 this week, and given how shallow the position is in fantasy, this might be an upgrade on several playoff teams. Sleepers like Logan Thomas could be a massive addition with the fantasy playoffs kicking off in Week 14.

We might be seeing the change happen before our eyes in Chicago. Typically rookie tight ends struggle in their first season due to the learning curve. It appears that Cole Kmet has grasped being a professional, and it showed on Sunday.

Kmet out-snapped Graham 54 to 34, ran more routes (20 to 15), and saw more targets (7 to 1). On those seven targets, Kmet caught five for 37 yards and one touchdown. The downside is the Week 14 matchup isn’t great on paper. The Texans have only allowed three tight ends to finish as top 12 options this season, and those are Travis Kelce, T.J. Hockenson, and Eric Ebron. Some of the best at the position this year. I wouldn’t recommend starting Cole Kmet, but I would stash him. If we see another high-target game, his Week 15 matchup against Minnesota is interesting.

Cole Kmet is rostered in 0.4% of ESPN leagues and 3% of Yahoo leagues.

In Houston’s first game without Will Fuller (suspension), Coutee led the team in targets (nine), receptions (eight), and receiving yards (141). Entering Week 13 with 38 yards all season, he blew that away with an early 64-yard reception from Deshaun Watson. It’s worth remembering that Brandin Cooks did leave the game for a period while being evaluated for a concussion. Cooks history with missing games is another reason Coutee is enticing as a Week 14 addition.

In Week 14, Coutee should see coverage from Buster Skrine in the slot. Skrine’s 539 yards leads the league in yards allowed while in coverage. He’s allowing a 119.9 QBR in his coverage and will likely have issues with Coutee. With the fantasy playoffs kicking off in Week 14, sleepers like Keke Coutee could be a massive benefit to your depth.

While Henry Ruggs and Darren Waller stole the show, don’t forget about Nelson Agholor. Derek Carr certainly did not. Despite finishing Week 13 with four catches for 38 yards, Agholor’s 11 targets should not go unnoticed. He now has 26 targets in his last three games, which is significant as he only had 29 in the first 10 weeks. Before Carr connected with Ruggs, he took two-straight attempts with Agholor, and better throws would have been completions. Agholor accounted for over 44% of Derek Carr’s intended air yards, per NFL Next Gen Stats.

If you would prefer Ruggs and think that he will continue this hot streak, he is available in 33.4% of ESPN and 36% of Yahoo leagues.

Throw out Week 12; that week never happened. In his last eight games, Patrick is averaging 69.25 receiving yards with five touchdowns. He scored two on Sunday night against the Chiefs. In the games he has played and has a QB, Tim Patrick has been a top-36 wide receiver in seven of nine games this year. Yes, he is tied to streaky Drew Lock, but Patrick is better than people give him credit. Add him as a sleeper in Week 14, and you could have a valuable flex play for the fantasy playoffs.

Davis has 147 yards and two touchdowns in Buffalo’s last two games without John Brown. Even as the clear third option behind Stefon Diggs and Beasley, the rookie has the ability to make big plays. Also, you can’t coach 6’6″. With the fantasy playoffs kicking off in Week 14, loading up your team with sleepers like Gabriel Davis could give you a significant advantage.

Speaking of Buffalo, see if Cole Bealey is out there. After waivers ran, he crossed the threshold but please look. With Brown out of the lineup, Beasly has 100-yard or more games in two of his last three and has seen 28 targets with two touchdowns. This week they face the Steelers, who are dealing with an identity crisis on defense.

The same applies to TY Hilton of the Indianapolis Colts. Rostered in 55% of ESPN and 65% of Yahoo leagues, Hilton is finally turning on at the end of the season. He just had his best two games of the season and will be the Colts WR1 moving forward.