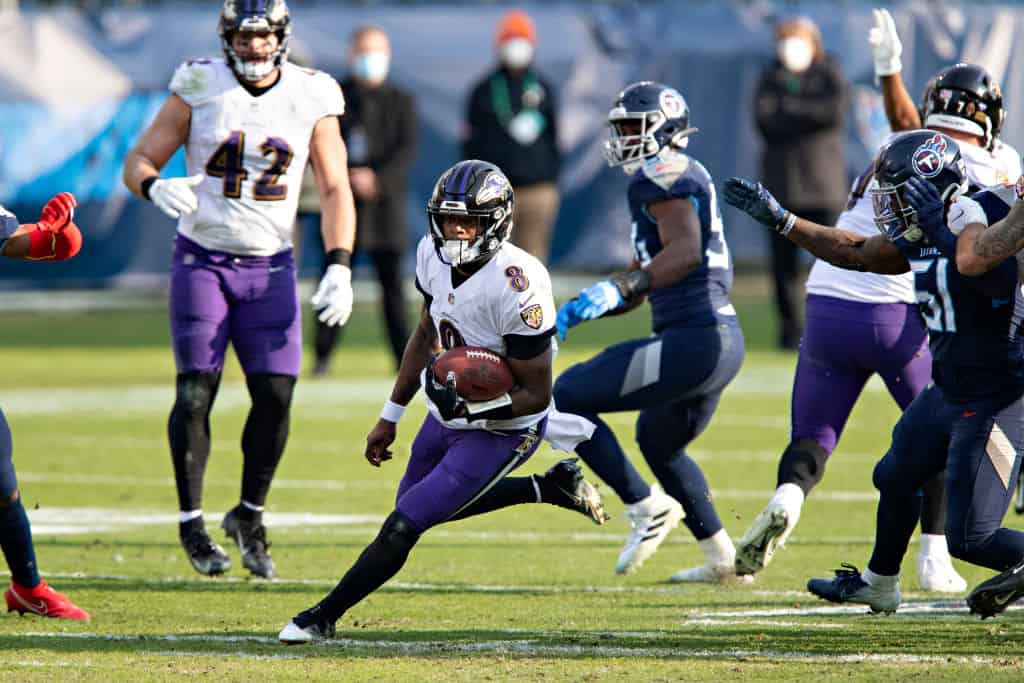 After 256 regular season games and the completion of Wild Card Weekend, the 2020-2021 NFL Playoffs are fully underway. Gaining in popularity in recent years is playoff fantasy football, an easy way to forget about what your other teams did for one final shot at redemption. With the Divisional Round of the playoffs kicking off on Saturday, here are the fantasy football rankings.

The Browns are 25th against the quarterback position in 2020, allowing 19.91 points per game. Patrick Mahomes and other Kansas City Chiefs’ players had a week off, and Andy Reid had a week to scheme something up for this game. Sorry Cleveland, it’s been a good ride, but that’s about to come to an end.

The Chiefs’ offense scored 53 touchdowns during the 2020 regular season (sixth in the NFL). Mahomes was directly involved on 40 of those touchdowns (75.4%), even though he sat Week 17.

Allen and Jackson, by the numbers

Josh Allen continues to show his incredible progression in year three of his career. Allen went 26 of 35 for 324 yards and two touchdowns and added 11 carries for 54 yards and a touchdown in last Saturday’s win over the Indianapolis Colts. Although the Baltimore Ravens are ninth in points allowed to quarterbacks (16.92), I will not bet against Josh Allen.

Lamar Jackson got the monkey off his back and shut a lot of people up in the process. The 2019 NFL MVP is looking like his former self. Since Week 13, Jackson has accounted for 13 touchdowns and 566 yards rushing. Jackson had 133 of those yards come just last week on 16 carries. The Buffalo Bills were 21st in rushing yards allowed to QBs. They gave up seven touchdowns, which was tied for second-highest in the league.

Can Aaron Rodgers succeed against a brutal Rams’ pass defense?

Although Aaron Rodgers takes on the NFL’s number one defense against QBs (13.52), the likely NFL MVP might catch a break this weekend. Aaron Donald is banged up and might be a touch slower off the line. If the Rams struggle to get pressure on him, Rodgers could pick them apart, even with Davante Adams seeing Jalen Ramsey.

Last week against the Chicago Bears, Drew Brees completed 28 of 39 passes for 265 yards and two touchdowns with no interceptions. He has all of his weapons back and takes on the 16th-ranked defense (19.34 points) in the Divisional Round of the playoffs.

Jared Goff tough to trust with injury and inconsistency throughout the season, rounding out the top 8

Alvin Kamara had a solid day last week, rushing 23 times for 99 yards and a touchdown. He also hauled in both of his targets for an additional 17 yards. The only thing that can stop him is Sean Payton treating Taysom Hill as the coach’s son in a Little League Baseball game. You know he isn’t near as good as the starter, but he will do it anyway. In the two games against the Buccaneers this season, Kamara had 56 yards rushing, 60 yards receiving, and three touchdowns.

Aaron Jones has his work cut out against the Rams, who allowed the fourth-fewest points to running backs at 19.96 per game. Still, he will see at least 20 opportunities in this game, with five of those coming through the air. Given this is PPR, it is a massive boost to his ceiling.

One of the biggest surprises last week was the receiving work for Browns’ RB Nick Chubb. Typically, that is a role reserved for Kareem Hunt. Chubb caught a short screen and took it 40 yards for a fourth-quarter touchdown to seal the game.

In total, Chubb carried the ball 18 times for 76 yards and added 69 yards and a touchdown on four catches. In the Divisional Round of the playoffs, Nick Chubb gets a Chiefs defense that is 25th in points allowed (25.59) and allows 101.13 rushing yards per game (10th in the NFL).

Akers and Dobbins, by the numbers

Cam Akers rushed 28 times for 131 yards and a touchdown, caught 2-of-2 targets for 45 yards in the Rams victory, and helped alleviate the quarterback issues last week. Akers received 76% of the RB carries and looked fully healed from his ankle injury. While the Packers are 28th in points allowed (26.93) on the season, over the last four weeks, they are 11th in the NFL at 21.20.

This used to be a cakewalk matchup, but they are playing well as of late. A sneaky way for Cam Akers to elevate his Divisional Round fantasy rankings will be through the air where the Packers allowed the third-most yards per game at 47.75.

Rounding out the top five of fantasy running backs for the Divisional Round of the playoffs is rookie J.K. Dobbins. The rookie out of Ohio State rushed nine times for 43 yards and a touchdown in last week’s win over the Tennessee Titans. Dobbins has now hit pay dirt in seven straight games. The Bills are 21st in points allowed (24.44), but Lamar Jackson’s surge in recent weeks limits his upside.

Keep an eye on the status of Ronald Jones. He suffered a setback before last week’s game and did not practice on Wednesday. If out, the Buccaneers will have no issue leaning on Leonard Fournette, who had 132 total yards against Washington.

The Browns are 25th against wide receivers (39.65), and Tyreek Hill is a ticking timebomb waiting to go off. They did get Denzel Ward back, but I don’t think that will matter. Hill got some much-needed rest for his hamstring. He should be a full-go for the Divisional Round of the playoffs as he sits atop the fantasy rankings.

Yes, Davante Adams will see coverage from Jalen Ramsey. Is that going to stop me from playing the guy who just had 1,374 yards and 18 touchdowns in 14 games? Nope. There is no defense for when both he and Aaron Rodgers are on the same page. In 2020, those two rewrote the book with those pages.

Stefon Diggs is still nursing the same quad injury that he had going into the Wild Card game. He also shredded Indianapolis for 132 yards and a touchdown on six catches. Diggs was the WR3 in PPR formats this season, and there is no reason to stay away from him this week even if the Ravens are ninth against the position (33.48).

While he was barely around for the regular season, Michael Thomas made his presence known quickly in last week’s game. Thomas had five receptions for 73 yards and a touchdown in the Wild Card round. Tampa Bay is 23rd against wide receivers (39.16).

At WR5 in our fantasy playoff rankings is Mike Evans, and honestly, I am still surprised he is even playing. Not only is he playing, but he also led the Buccaneers with 119 receiving yards on six of 10 receiving last week.

Neither he nor Chris Godwin played great against the Saints in their two matchups this season. However, the size and vertical threat give Evans the potential to score on any play, putting him inside the top five of wide receivers for the Divisional Round of the playoffs.

Other wide receivers to consider this week in DFS lineups

Tied with Kelce at 11 touchdowns on the season is the fantasy TE3 for the Divisional Round of the playoffs, the Packers’ Robert Tonyan. The TE3 on the season, Tonyan averaged 9.93 yards per target and caught 52 of his 59 targets for 586 yards. His 88.14 catch percentage was by far the best in the NFL.

Mark Andrews continues to be heavily involved in the Baltimore passing game. Andrews caught four of six targets for 41 yards in the Wild Card game last week. He was second in targets last week and has seen at least five targets in four of the last five games. Buffalo allows the fifth-most points to TEs at 14.83 and gives up the second-most yards per game (62.06).

Austin Hooper could have had a massive game last week. He caught seven of 11 targets for 46 yards and a touchdown, but he had at least two drops, including another touchdown. Kansas City is 27th against the TE (14.46) and give up 2.78 PPR points per reception.

Jared Cook tied for a team-high seven targets in what was a fantastic matchup. Tampa Bay is 23rd vs. tight ends (13.89), and Cook will carry touchdown upside during the Divisional Round of the playoffs.

Lower-end TE1’s for this week’s playoffs 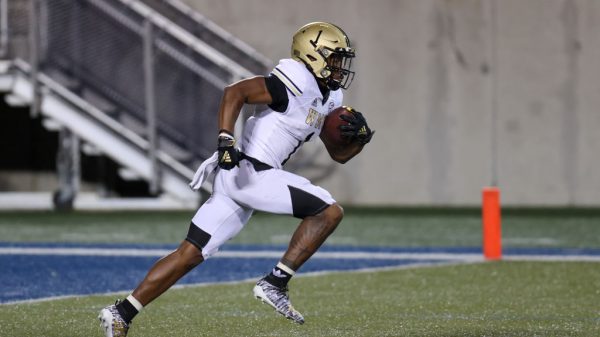