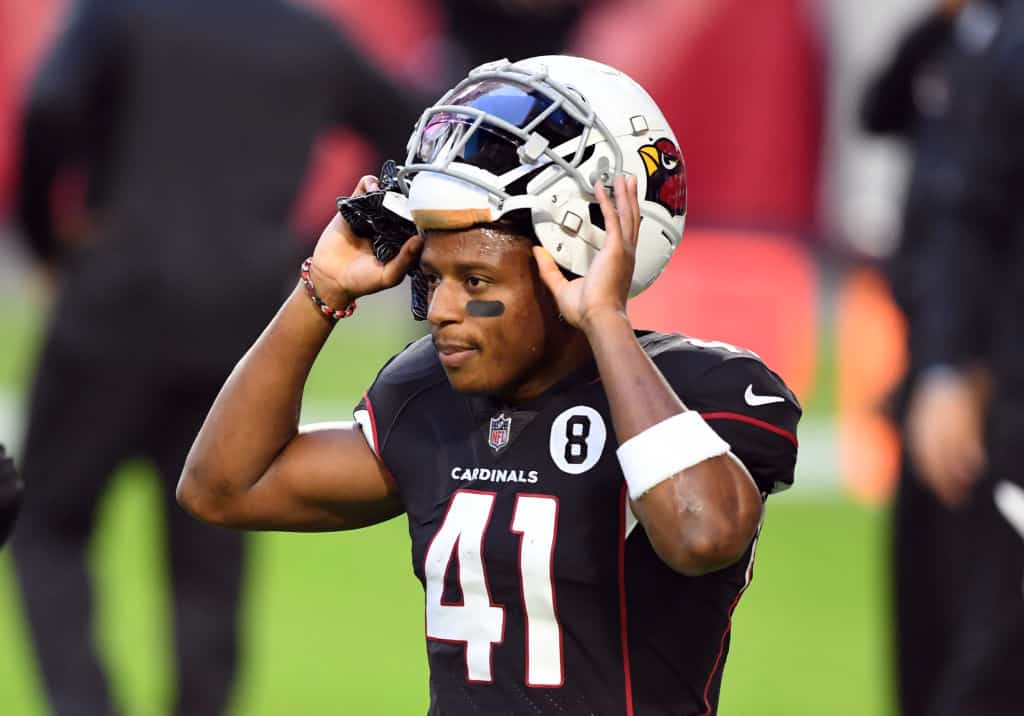 GLENDALE, ARIZONA - OCTOBER 25: Kenyan Drake #41 of the Arizona Cardinals warms up prior to a game against the Seattle Seahawks at State Farm Stadium on October 25, 2020 in Glendale, Arizona. (Photo by Norm Hall/Getty Images)
What's in this article? Click to show
Cardinals RB Kenyan Drake’s fantasy outlook after suffering an ankle injury
Where Drake has disappointed, Edmonds has thrived for the Cardinals
Chase Edmonds needs to be the priority waiver claim for Week 8 following Kenyan Drake’s injury
What should you do with Kenyan Drake for the remainder of the season?
Want more fantasy football analysis and news?

It has gone from bad to worse for those who drafted Arizona Cardinals running back Kenyan Drake in fantasy football this year. From underperforming to now dealing with an injury that will keep him out of the lineup for weeks to come, both the Cardinals and fantasy managers need to pivot quickly. How long is Kenyan Drake going to be out? What is Kenyan Drake’s fantasy outlook now? Who is going to be the one to step up and fill his role? Are the Cardinals a better team without Drake on the field? The last one sounds like a bit of a hot take, but it might be more realistic than you initially think.

The Cardinals will be without their leading rusher for a period of time.

Kenyan Drake suffered a slight tear of a ligament in his ankle and will miss a few weeks, Adam Schefter of ESPN reports. The team has since come out and said they are treating it as a high ankle sprain right now. One option the team will have is to put Drake on the IR, as the rules changed this year, and a player can be taken off after a three-week stint rather than shutting them down for the year.

Drake suffered the injury with 4:12 left in the game against Seattle and did not return. He was carted to the locker room with a towel over his head and finished the day on the field and for his fantasy GMs with 34 yards on 14 carries and one catch for seven yards.

After a phenomenal second half of the season after being traded from Miami, Drake blew up. From that point on, Kenyan Drake was the fantasy football RB4 and had several multi-touchdown weeks, including a four-touchdown game against the Cleveland Browns in Week 12. But this year has been a different story.

Where Drake has disappointed, Edmonds has thrived for the Cardinals

As we all are painfully aware right now, Kenyan Drake has fallen short of every fantasy football and real-life expectation placed on him in 2020.

To put this into perspective, Drake was on pace to have more targets (70) in 2019 than he has receiving yards (66) in 2020. Outside of Week 6, Kenyan Drake has yet to score over 14.5 PPR fantasy football points in a game, something he did in five out of eight games with the team last year.

While he might be the leading rusher on the team, Kenyan Drake has not been the team’s RB1 for fantasy football; that goes to Chase Edmonds.

Although Edmonds has been out-touched by Drake 126 to 55, he only trails him by 1.3 points in PPR fantasy scoring. Edmonds (1.52) more than doubles Drake (0.67) in terms of fantasy points per touch. He has done all of this while only playing in more than 44% of the team’s offensive snaps one time (Week 8 due to Drake’s injury).

When you look at Kenyan Drake’s fantasy outlook and wonder where the targets went, all you have to do is look at Edmonds as he has gotten nearly all of them. Edmonds is third on the team in targets (32), receptions (26), and receiving yards (222) and is on pace for 73 targets on the season. This is nearly identical to what Drake was doing in 2019.

The Cardinals and fantasy managers alike don’t need to look far when trying to find where the production will come from the running back position; Chase Edmonds has been doing it all year long.

I have been preaching this every week, talking about the roster percentage of Chase Edmonds being far too low and needing to be rostered in all leagues. If you did already, congratulations because you just beat the rush that will make Black Friday look like Sunday Church on Wednesday as waivers run, and people will be fighting to acquire the new starting running back.

Still available in over 47% of leagues, I will be shocked if this doesn’t shoot up to over 80% after the waivers process. Edmonds has proven to be the more productive back and the one to roster in fantasy. I will fully admit I was wrong on Kenyan Drake and his fantasy football outlook this season. He was one of “my guys” for the year, but you bet I was quick to add Edmonds, and you need to be as well.

Knowing the Cardinals give their starting RB around 17 carries each week and his efficiency in the passing game, Edmonds will be a low-end RB1 moving forward. I was already ranking him ahead of Drake, and I don’t see that changing once he returns to the team.

One other name to remember is RB Eno Benjamin, the rookie from Arizona State. Benjamin was a talented college running back that the Cardinals took in the seventh round of this year’s draft. He made the final roster but has yet to be active for a game yet this season. I would expect him to be active moving forward and could see his first career touches this week. He is more of a dynasty addition than redraft, although likely already on a roster in most dynasty leagues. It doesn’t hurt to check.

What should you do with Kenyan Drake for the remainder of the season?

Kenyan Drake’s fantasy outlook isn’t completely finished yet. If you have Drake, I don’t think you can drop him. The best hope is they place him on the IR, and you can do the same thing while not having him clog up a spot on your roster.

You could try to trade him, but his value is as low as it gets, so it is hard to imagine you will get much in return. Currently rostered in 97% of leagues, I could see impatient managers dropping Drake. If this happens, I would snag him up because he could come back and play well in a few weeks, and you can attempt to flip him to someone who still believes. Be cognizant of when your league’s trade deadline is, though. Once it passes, this option is off the table for good.