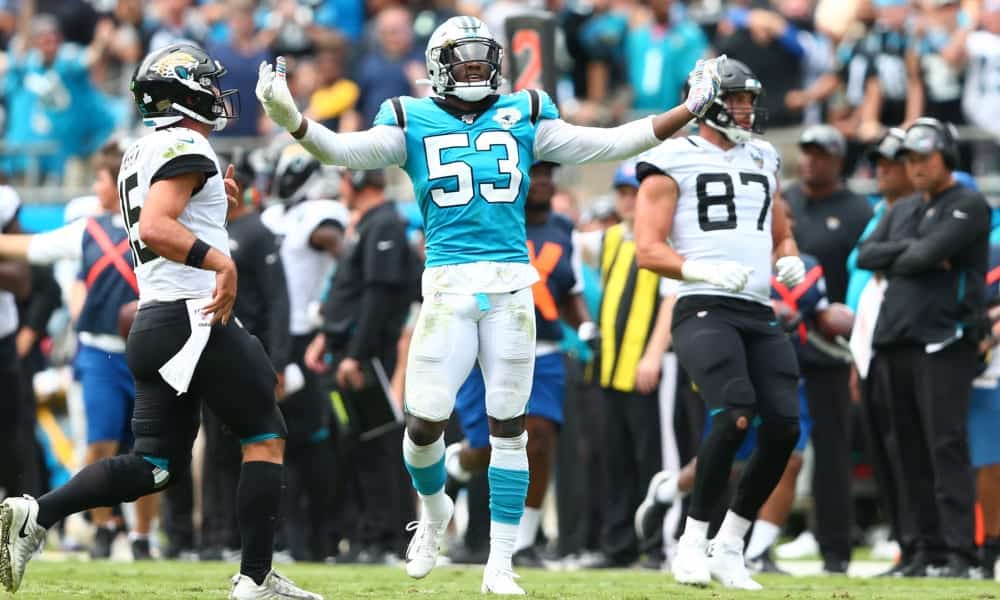 When it comes to Individual Defensive Player (IDP) scoring, fantasy edge rushers find their value in big-play scoring settings. For a recap of the different types of IDP scoring, check out PFN’s primer on IDP Scoring Settings for Beginners.

For me, the start of the evaluation process for end rushers begins with a simple classification: finesse or force. You have power rushers off the edge that get vertical and engage with the opposing lineman between their numbers as quickly as possible to overwhelm them. Next, you have my personal preference, finesse rushers that expose as little of themselves to their opponent to get around them.

Of course, some rushers showcase both traits. Myles Garrett, Danielle Hunter, and Chandler Jones are just a few examples of players who employ both power and finesse techniques at a high level.

What is a “bend” player?

Finesse rushers at the top of their game display a particular attribute that sets them up for big plays: bend. There are only so many words I can use to describe what bend is and looks like in action adequately. Here is one of the best players to show bend, Von Miller, during the Denver Broncos Week 17 game against the Oakland Raiders.

At first glance, it appears Miller may have fallen and luckily scrambled to end up making the play. However, a closer look shows that his knee does not hit the ground until making contact with the quarterback. The three-time All-Pro had a plan.

Let’s take things a step further and isolate his approach and steps, to get a look at the progression of the rush.

After initially squaring up his shoulders to the tackle, Miller turns his body and plants his outside foot to set the edge of his rush. The turn gives the smallest possible target for the offensive lineman to strike. It’s also the beginning of the dip and rip maneuver as Miller begins to lower his right shoulder.

Miller now has his forward lean to complete the dip. The offensive lineman (#72) is stepping to his right here, so the difference is exaggerated, but Miller’s hips are much lower, giving him an edge in power and leverage. The tackle’s right hand is over Miller’s nameplate since the dip and body turn severely reduced the area the lineman could hit. At this point, Miller has already won the rep. 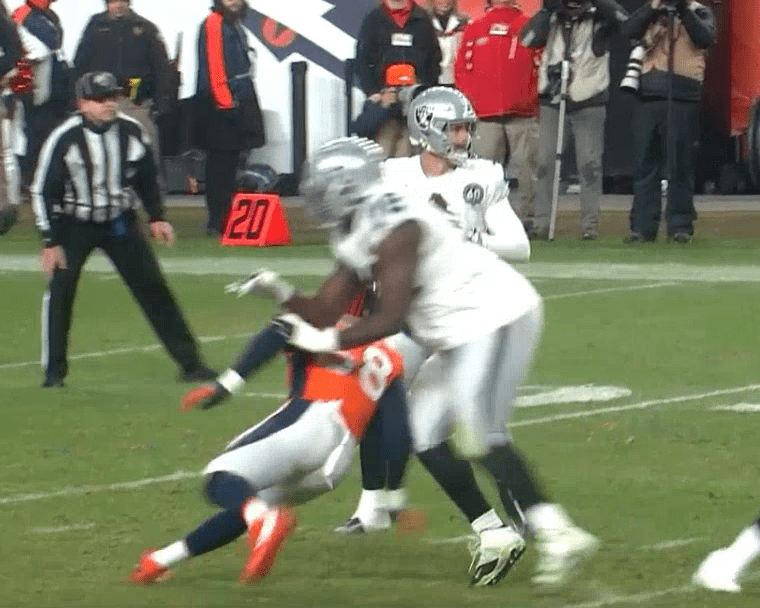 Now with his hips underneath the tackle’s outside shoulder, Miller just needs to complete his rip maneuver to keep himself upright and complete things. The angle of his legs is something to see here. At a nearly 45-degree angle to the ground, Miller is still moving with full control of his body. He’s not overshooting things and falling forward.

Sometimes you’ll see scouts talk about something called ankle flexion or ankle mobility. In this last shot, Miller’s inside leg displays mobility with the side to side bend. Completing the movement requires flexion, which is the ankle’s ability to bend forward and backward.

So when we say we like the bend of an edge rusher, this is sort of the pinnacle of what we’re referencing. The key to bend is control. Come in too fast, too high, too reckless, and you’re an easy target to put in the dirt. So, in addition to Miller, who are some IDP players you should look at that display these traits? 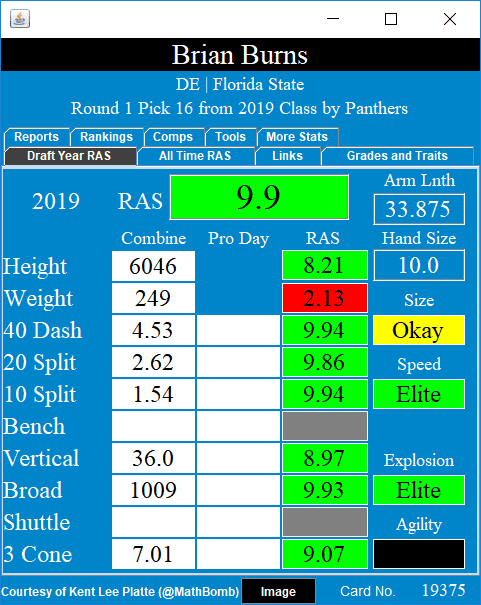 There may be no brighter IDP fantasy edge rusher to invest in than Brian Burns, who just turned 22 in April and carries impressive NFL production under his belt already. With plenty of bend and explosion, Burns put up remarkable numbers on an incredibly limited basis in his first year with the Carolina Panthers.

There is an interesting comparison from a production standpoint to one of the best bendy IDP fantasy edge rushers in the NFL: Yannick Ngakoue. Their respective 2019 numbers look something like this.

So am I about to say Burns is better than Ngakoue? No, I haven’t lost my mind. Last year wasn’t where the current Jacksonville Jaguars’ star wanted his number to be, and a down year happens sometimes. However, let’s take one last look, comparing Burns’ rookie year to Ngakoue’s second year in the league, his best statistical season to date.

Ngakoue’s run defense wasn’t what it is now during his second season, and if things break right, Burns should see a remarkably similar career path.

Being the only threat on the line would mean teams could focus blocking schemes to take Burns out of the game. However, Carolina’s 2020 NFL Draft started off adding run-stopper Derrick Brown with the seventh overall selection. They came back around at 38th overall in the second round with defensive end Yetur Gross-Matos. Should either one play to the level of their investment, the trenches in Carolina will begin to gel in the long run. 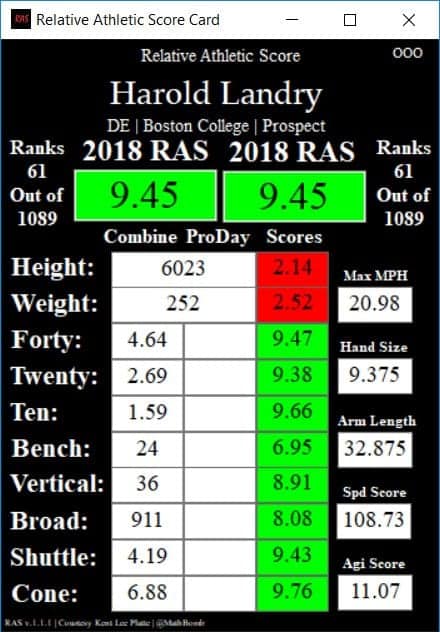 It takes a moment to think back to the 2018 NFL Draft, but Harold Landry was an edge rusher that had the tape and talent to go in the top half of the first round. Yet lingering ankle injuries along with concerns about his knees and back saw him slip into the second round where the Tennessee Titans stopped his fall at 41.

Similar to Burns, Landry came into his rookie season, notching 57% of defensive snaps, and last year, he saw a massive jump to 86% on the heels of the Titans old guard (Brian Orakpo and Derrick Morgan) retiring. But Landry makes this list because his film shows him as one of the more impressive fantasy edge rushers with great bend and explosion that hasn’t put up stats at the rate his highlights would indicate. Landry is impressive but volatile. 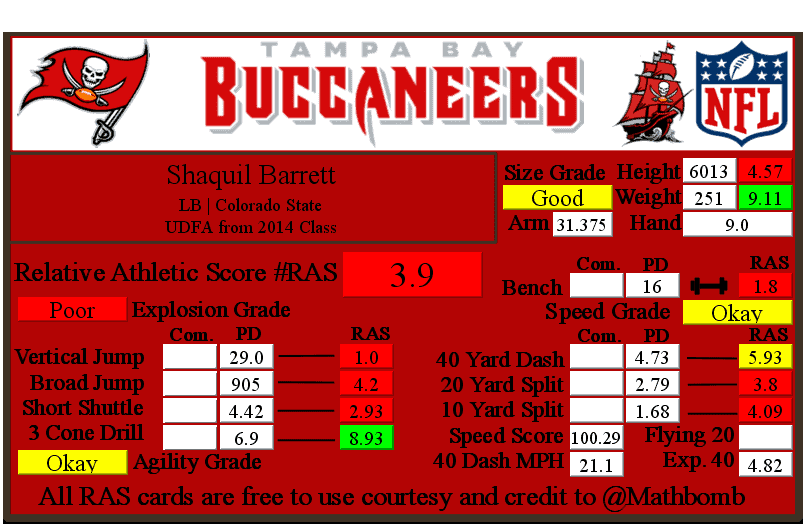 The NFL’s 2019 sack leader came out of nowhere as Shaquil Barrett saw the drafting of Bradley Chubb to go alongside Von Miller in Denver. He then chose to sign with the Tampa Bay Buccaneers. Barrett had never produced numbers like this before and certainly didn’t have the athletic profile to put up these types of numbers. He wins entirely with fluidity and control. His four sacks against the New York Giants helped encapsulate who he is as a player.

Right now, it’s hard to tell if this season was an aberration or an actual display of what he can do in the right system. Todd Bowles is an impressive defensive coordinator, and while his tenure with the New York Jets didn’t lead to many prolific fantasy edge rushers, Barrett could end up as his most exceptional work.

Be sure to check out Pro Football Network for more IDP-related articles such as Jamal Adams’ IDP value based on potential landing spots and the 2020 IDP Rookie Dynasty Rankings.