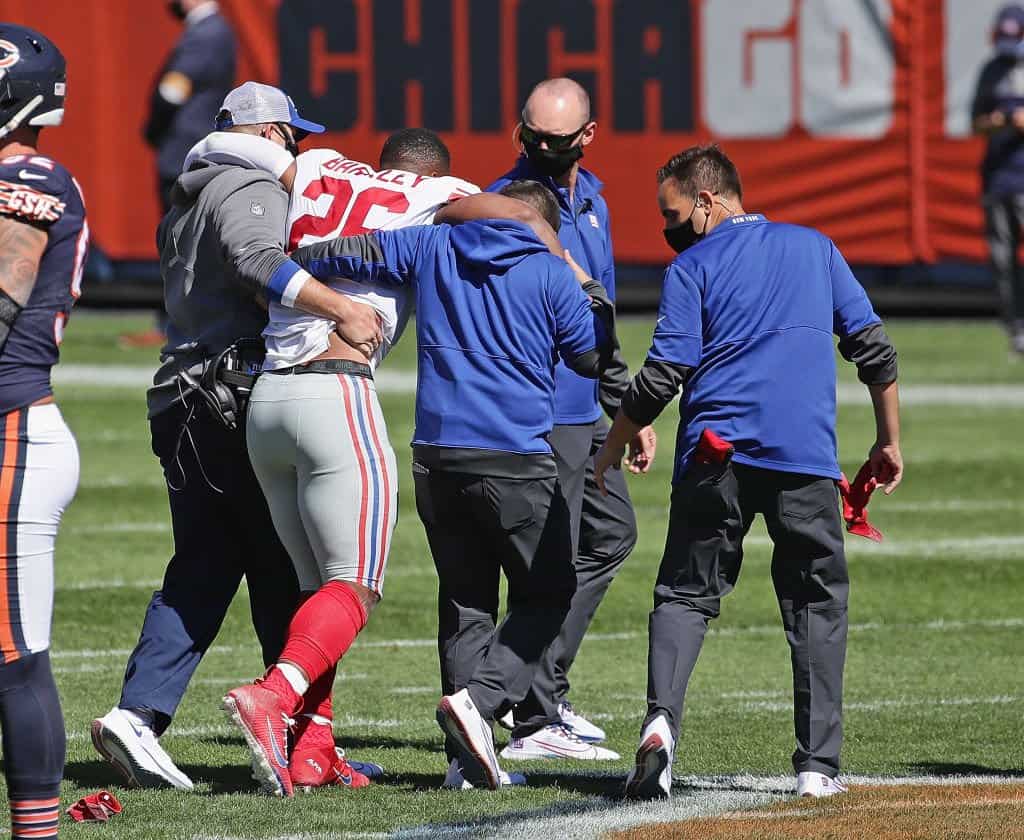 CHICAGO, ILLINOIS - SEPTEMBER 20: Saquon Barkley #26 of the New York Giants is helped off the field with an injury against the Chicago Bears at Soldier Field on September 20, 2020 in Chicago, Illinois. (Photo by Jonathan Daniel/Getty Images)
What's in this article? Click to show
Waiver Wire Week 3 Pickups: Running Backs
Waiver Wire Week 3 Pickups: Wide Receivers
When do waivers clear in Week 3?

The Week 3 Waiver Wire in fantasy football is going to be extremely active after an NFL weekend that saw way too many injuries across the league, especially to star players such as Saquon Barkley and Christian McCaffrey. How you adjust to these injuries can determine your fantasy season, even if we are only heading into the third week. In my Week 3 fantasy waiver wire recommendations, I’ll help you navigate the injury situation so you can come out in the end standing on top.

As the president of the Gardner Minshew fan club, I love that he is surpassing fantasy expectations this season, not only with his arm but legs as well. This Thursday, he has a juicy matchup against the FISH, followed by the Cincinnati Kittens in Week 4. Grab him now and tee him up for the next two weeks!

Just for the record, I said the Dolphins will regret not drafting Herbert over Tua months ago, and I feel even better about my prediction after Week 2. Herbert’s last minute start was a surprise, but a pleasant one at that. Herbert did not have much time with starters at camp, or a preseason game to work on the playbook, and was thrown right into action minutes before kickoff where he was beyond impressive. This Sunday, the Chargers host the Panthers, a favorable matchup for Herbert if he gets the start again.

Other quarterbacks to consider adding in Week 3

Christian McCaffrey will miss several games due to an ankle injury so therefore, Mike Davis steps into the starting role. Not that any RB can compare to CMAC, but Davis was successful in the passing game in Week 2 (7 receptions for 70 yards). Davis had a good camp and is ready for a larger role. Davis should be the number one waiver wire pickup this week.

Saquon Barkley is out for the season with a torn ACL. Fantasy players are now torn with ranking Lewis or Gallman first in their request order. Lewis is a better receiving back, the Giants will be playing from behind a lot this season, and considering the majority of leagues are PPR, Lewis should be first on your list.

Malcolm Brown and Cam Akers both suffered injuries in Week 2, which means Henderson’s role becomes legit in the Rams backfield. Henderson contributed to both the rushing and passing game on Sunday. The Rams have a difficult matchup against the Bills in Week 3, but Henderson is still worth the waiver wire pickup as a low-end RB3/Flex in Week 3.

Other running backs to consider adding in Week 3

The Cole and Minshew connection is real. The Jags have become a very pass-happy team this season and I don’t see that changing anytime soon. Cole received 7 targets and went 6 for 58 and a score in Week 2. It’s a short work week for the Jags, but they have a favorable matchup against the FISH on Thursday Night Football.

Christian McCaffrey is out with an ankle injury, and his targets need to go somewhere. Samuel should benefit not only in the passing game but also with his speed, I envision the Panthers getting creative and using him in the rushing game along with Mike Davis.

I recommended Gage last week and will do it again. The Falcons offense loves to throw the ball and is feeding all three wide receivers. Gage is second in targets and receptions after Week 2. Atlanta’s defense is nothing to write home about. Therefore, Matty Ice will be chucking the rock a lot late in games. Gage’s healthy target share should continue.

Other wide receivers to consider adding in Week 3

Gesicki ran 35 routes on 45 offensive snaps in Week 2. He looked impressive on Sunday against a good Bills defense, posting 130 receiving yards and playing a lot out of the slot. I love the chemistry between him and Fitzpatrick, and he has a juicy matchup against the Jaguars on Thursday Night Football. If you have lost Kittle or Jack Doyle, Gesicki could be a solid replacement.

Other tight ends to consider adding in Week 3

When do waivers clear in Week 3?

Let’s quickly review when waiver wires clear and how the process works. You may put in claims on players that are currently free agents, but you will not officially add any players until the waiver process concludes in the wee hours of Wednesday morning (in most leagues).

For most leagues, if multiple people put in a waiver claim for the same player, the fantasy manager with the worst record will be awarded the player. In some leagues, waivers are decided by free agency money allotted to each fantasy manager, and thus you must be careful how much and how early you are spending those dollars.

Any dropped player must be on waivers for 24 hours, and at that point, the waiver wire order will decide who is awarded the player, or in the event no one bid on the player, the player becomes an “undisputed” free agent.

Always check your league settings to understand all of your unique waiver wire details.

Anita Marks is the Chief Fantasy Analyst at Pro Football Network. Marks is also a gambling analyst for ESPN and appears on Daily Wager, which airs from 6-7 PM ET on ESPN 2. Her radio show – Weekend Wager – airs on ESPN New York (98.7) FM every Friday at 10 PM ET. Follow her on Twitter: @AnitaMarks.