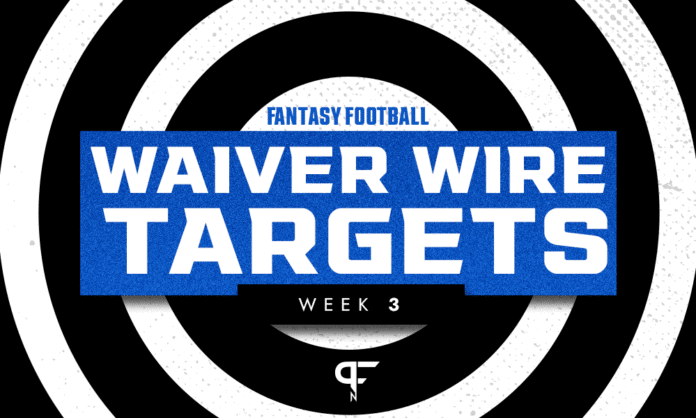 After an exciting start to the 2021 NFL season, who are the priority Week 3 waiver wire pickups to target for your fantasy football team?

Following an exciting Week 2, it’s time to improve our rosters for Week 3 by using the waiver wire. Let’s take a look at the top waiver wire pickups to target for your fantasy football team.

All roster percentages are taken from Fleaflicker.

Here are the quarterbacks to target on the Week 3 fantasy football waiver wire.

Bridgewater had another strong outing in a Week 2 win at Jacksonville. He threw for 328 yards and 2 touchdowns. Now, he gets the Jets’ soft secondary in Week 3. Bridgewater is worth a couple of bucks of FAB (free agency budget) if you need a spot starter at QB.

Despite New York’s 0-2 start, Jones has actually been a solid fantasy asset. The Giants opened the season with two tough defenses in the Broncos and Washington. However, New York’s schedule gets easier in Week 3 when the team faces the hapless Falcons at home. Jones is a borderline QB1 in Week 3 and a worthy streamer.

There aren’t many RBs available on the waiver wire in Week 3, but there is one that’s a clear target.

Apparently, Patterson is finally a thing. While Patterson carried the ball 7 times for just 11 yards in Week 2, he caught 5 of 6 targets for 58 yards and a touchdown. Patterson is eligible at both RB and WR on Yahoo. He looks like a legitimate weekly RB3. He’s worth 10-20% of your FAB depending on need.

Gainwell is slightly above the usual threshold for a player to appear on this list, but it’s slim pickings out there at running back. Gainwell didn’t do much against the 49ers on Sunday, but he touched the ball 8 times. He’s Philadelphia’s clear No. 2 running back and would be the primary beneficiary of a Miles Sanders injury. That potential is worth sticking on your bench. I’d throw 5-7% of your FAB at Gainwell.

There are several WRs to target on the Week 3 fantasy football waiver wire.

The Vikings want to be a running-oriented offense, but their defense is not going to cooperate. Osborn is Minnesota’s clear WR3 and posted a 5-91-1 line last week. With back-to-back weeks of useful production, he’s worth 10-15% of your FAB.

Sometimes, you just need the guy that won’t put up a zero — that’s Renfrow. No splash plays. No touchdowns. But he’s good for 6-8 targets and roughly 10 fantasy points per week. With injuries piling up and NFL bye weeks around the corner, Renfrow is worth a 5-7% FAB bid.

By no means is Humphries a must-add. But Washington QB Taylor Heinicke threw checkdowns a lot on Thursday Night Football, leading Humphries leading to an inefficient — but PPR effective — 7 catches for 44 yards. If you need a Week 3 starter or some depth on your bench, I would throw a few bucks of FAB at him.

With Jarvis Landry likely out 4-6 weeks with a sprained MCL, Higgins is a speculative add as a potential starter, especially if Odell Beckham Jr. doesn’t return this week. Higgins is worth a small FAB bid.

No one can comprehend why the Steelers ran a meaningless play with 5 seconds left down 2 scores in their loss to the Raiders. On that play, Diontae Johnson went down with what looked like a potentially serious knee injury. Washington can probably be had for free on the waiver wire as a speculative add.

Patrick caught 3 of 4 targets for 37 yards and a touchdown in the Broncos’ win over the Jaguars. Courtland Sutton is Denver’s clear WR1, but Patrick played more than KJ Hamler in two-receiver sets. He’s worth a small FAB bid.

Which tight end should you target on the waiver wire in Week 3?

In Week 2, Williams caught all 7 of his targets for 94 yards. To be perfectly honest, I don’t think he’ll ever post this type of production again. But there are only a few reliable fantasy tight ends — if you’ve been starting someone like Cole Kmet or Gerald Everett, why not take a chance on Williams?

Arnold caught 3 of 4 targets for 55 yards. Given the lack of fantasy depth at the tight end position, that’s a winning performance. He’s a name to at least consider.

When targeting kickers to pick up on the waiver wire, we want those playing on favored teams, preferably at home, and in good weather.

The Raiders are home favorites against the Dolphins this week.

The Giants get the soft Atlanta defense at home in Week 3.

Here are the defenses to target on the Week 3 fantasy football waiver wire.

The Panthers play on the road in Houston on Thursday Night Football, but Tyrod Taylor has already been ruled out. Backup quarterback Davis Mills is not ready to start games in the NFL. This one could get ugly — go get Carolina’s defense.

The Raiders’ defense isn’t terrible and they get the Dolphins at home next week. Jacoby Brissett might be starting for Miami.