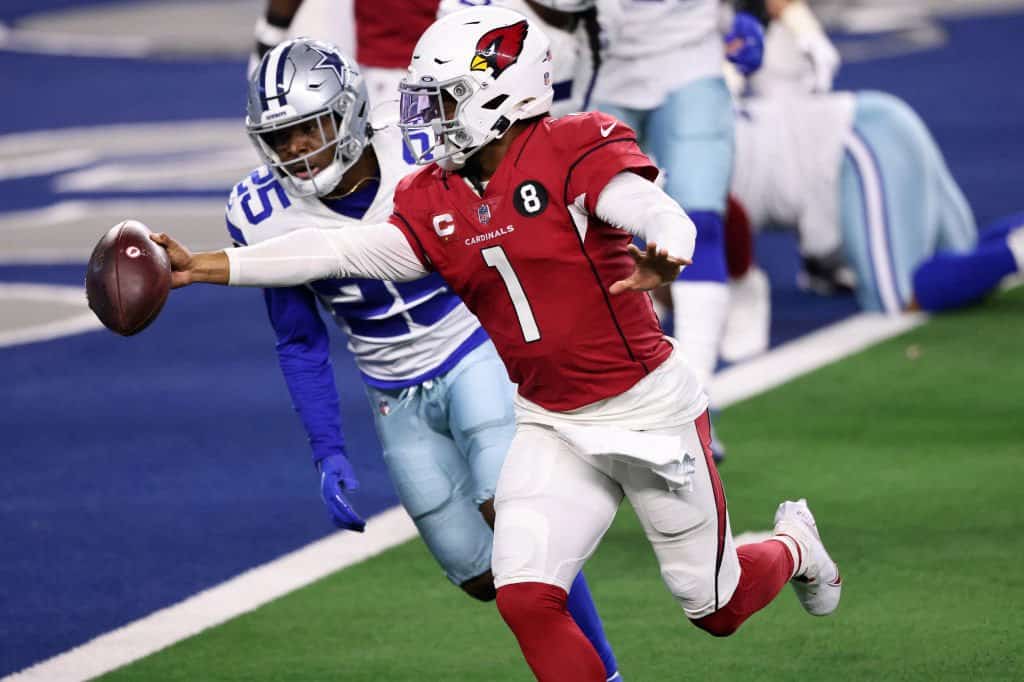 ARLINGTON, TEXAS - OCTOBER 19: Kyler Murray #1 of the Arizona Cardinals runs for a touchdown against Xavier Woods #25 of the Dallas Cowboys during the third quarter at AT&T Stadium on October 19, 2020, in Arlington, Texas. (Photo by Ronald Martinez/Getty Images)
What's in this article? Click to show
Fantasy Football Trade Analyzer: Should I trade away Kyler Murray before my fantasy league’s trade deadline?
Fantasy Trade Deadline Sell: Is Dede Westbrook worth holding on to?
Should I trade away Patrick Mahomes for Josh Jacobs?
Week 7 Trade Target: Should I target Tim Patrick before my league’s fantasy trade deadline?
Can you tell me a little more about Travis Fulgham’s value?

Each week, I will answer your fantasy football questions regarding trades in your league. Embedded in all of these answers are lots of little tips and hints to help you navigate your Week 7 trade targets and the remainder of the season, even if the question wasn’t yours. This week, I load my fantasy football trade analyzer to talk about several buy and sell options as we inch closer to many fantasy league trade deadlines. This includes the likes of Kyler Murray, Tim Patrick, Travis Fulgham, and more.

Have a fantasy football trade question for me? Email info@pfn365.com or tag us on Twitter: @PFN365, and I may answer it next week heading into Week 7.

Fantasy Football Trade Analyzer: Should I trade away Kyler Murray before my fantasy league’s trade deadline?

Williamson: So, this comes down to this – if you are to make one of the two trades, would you rather have an early second coming your way or give up an early-to-mid second in exchange for Cousins? Let’s take a deeper look with the help of my fantasy football trade analyzer.

Without question, Cousins is certainly an asset in Superflex, but I would rather add the second instead of losing the second and picking up Cousins. That is only if you can handle just losing a quarterback off your roster, which can be very difficult to overcome in Superflex.

All that being said, Murray is struggling as a passer but still looks like Sonic The Hedgehog as a runner. And that running gives Murray immense value in Superflex. Plus, Murray is only 23 years old, and Hopkins turns 29 in June.

Of course, Hopkins is a tremendous player. You are still giving up the premium position in this format and a player whose best days are surely ahead of him for an excellent current player that will probably only go backward in the coming years. Plus, you can always find wide receivers, but not quarterbacks in Superflex.

Hopkins’ style of game (contested catch guy) implies that he will not fall off a cliff, but history is undefeated, and history shows that this is the time when wide receivers start to decline. Keep Kyler and be very happy about owning him.

Fantasy Trade Deadline Sell: Is Dede Westbrook worth holding on to?

Question: Dynasty league, fifth year. Is Dede Westbrook worth holding on to? I think he’ll play elsewhere in 2021. I have 10 starters, standard scoring.

Williamson: This is a strange one, as Westbrook really looked the part at the college level and has flashed during his career in Jacksonville, especially early on. That being said, except for DJ Chark, the receivers ahead of Westbrook on the depth chart really aren’t that impressive right now.

Laviska Shenault has a world of talent, and Jacksonville is right to be playing him as much as possible. But the point here is that Westbrook can’t get action over middling players – he has been a healthy scratch. That sure isn’t a sign of him being on the verge of a breakout.

Related | Fantasy Football Start/Sit Week 7: Doubling down on a pair of Lions

That being said and to your point, a team out there that liked Westbrook coming out of college could add him on the cheap for 2021, and a change of scenery could do him a lot of good. You didn’t specify the size of your dynasty roster, but overall, he really isn’t someone to prioritize as a stash for next year.

Even if he “hits” in a better situation next year, Westbrook still has a very low ceiling for fantasy purposes. The chances of him paying off big for you are slim, and in the meantime, he is clogging your roster.

Should I trade away Patrick Mahomes for Josh Jacobs?

Question: What does your fantasy football trade analyzer say about me trading away Patrick Mahomes for Josh Jacobs? I am in a Superflex dynasty league and also have Kyler Murray and Deshaun Watson.

Williamson: You can get way more than just Jacobs for Mahomes. If this were a Superflex startup draft, Mahomes very well could be the first pick overall with Murray and Watson also going in the first round more often than not.

You have three amazing premium assets. Now, that isn’t to say that you shouldn’t move one, but you better get some quarterback that is playable in return and much more than Jacobs.

That isn’t a knock on Jacobs, who is a great running back, but he isn’t worth near Mahomes’ value. You have three massive assets for your format, and if you need a running back, you should consider moving one of these quarterbacks.

But, the deal should look more like Jacobs, a solid quarterback like Derek Carr or Jared Goff, and a first-round pick on top of that to even start the trade conversation. My fantasy football trade analyzer says that trading Mahomes for Jacobs straight up is madness.

Question: What do you think of Denver Broncos WR Tim Patrick for the rest of the season? Is he a guy I should target before the fantasy trade deadline?

Williamson: Patrick has become Courtland Sutton, and there is no reason to think his role will change from that at any point this season. He rarely leaves the field and is getting quite a few targets every week. Drew Lock wasn’t great last week, but his return certainly helps this passing game compared to the quarterback play to start Denver’s season. Plus, you would think that Lock will only get better as the season continues to progress.

It hasn’t been super exciting, but Patrick does lead the Broncos in receptions and receiving yards this year. Denver targets him downfield, and Lock is throwing deep more than any quarterback in the league. Drew Lock is aggressive, and that fits Patrick’s game.

Jerry Jeudy could be in for an expanding role with a lot of his snaps coming out of the slot, and Noah Fant should be back sooner than later. But, Patrick is a fixture of this offense and should be in the WR3 neighborhood for fantasy.

My fantasy football trade analyzer says that he’s a guy that you may want to look at acquiring before your league’s fantasy trade deadline.

Can you tell me a little more about Travis Fulgham’s value?

Williamson: Travis Fulgham isn’t going away, and I expect the Eagles offense (and the entire team for that matter) to start to trend much more in a positive direction. Fulgham and Carson Wentz have a good on-the-field relationship, and Wentz trusts him in contested catch situations, something Fulgham does quite well.

Before long, Philadelphia’s skill position players could be Miles Sanders, Dallas Goedert, Desean Jackson, and Fulgham with Zach Ertz and/or Jalen Reagor sprinkled in down the line. That sure looks a ton better than what has surrounded Wentz up until this point in the season.

So, Fulgham’s target share certainly could take a hit when that time comes, but the Eagles offense should also run more plays, get more first downs, and score more points. So while Fulgham’s percentage of the pie might drop, the pie itself will grow. And Wentz is now playing very well.

But if you are set on moving Fulgham and getting out with a profit, a random second-round rookie pick would probably be a good jumping-off point.

Matt Williamson is a Senior NFL and Fantasy Analyst for Pro Football Network. You can follow him on Twitter: @WilliamsonNFL.

In this article:Top Stories