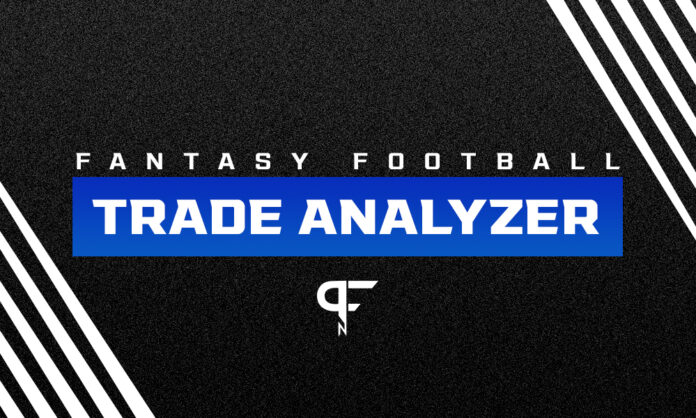 Fantasy Football Trade Analyzer: Why you should sell high on Kareem Hunt and Emmanuel Sanders

It's time to wheel and deal! Our fantasy football trade analyzer looks at three players to trade for and three to trade away ahead of Week 6.

When is my favorite time to trade for a player? When he’s struggling on a team that’s also struggling. If there’s an opponent who’s 2-4 or worse, now is the time to strike — politely, of course. For the next few minutes, I’ll serve as your trusty fantasy football trade analyzer. The following includes three players you should trade for and three you should sell high as soon as possible.

Which players should you trade for this week?

If you can afford to stash Russell Wilson, trade for him. The exception would be if your opponent is 5-0 or 4-1 and is more than happy to stream QBs while awaiting Wilson’s return. But if that’s not the case, convince your needy rival to unload Wilson for a caliber of player they cannot find on waivers. For example, Sam Darnold has a brutal fantasy playoff schedule. So package Darnold in a two-for-two swap for Wilson. Or, deal Damien Williams if you don’t have to start him before David Montgomery returns.

There’s always a way to achieve a win-win. It starts by helping an opponent win now while helping yourself win bigger later.

Do you think Darrell Henderson will remain healthy the rest of the season? That’s the big question. If you’re in a deep league where Sony Michel is rostered, you might not have to pay more than pennies for him. Another Henderson injury would catapult Michel to instant RB3+ value with plenty of TD potential in a high-powered offense.

Remember, trading is not about theft. There’s nothing on this page about trying to get rid of Odell Beckham Jr. for Patrick Mahomes. Life doesn’t work that way. This is about playing the probabilities. Michel has a good chance of starting more games this year. Trading for a backup who could start is one of the best value plays you can make.

Who knows when Micahel Thomas will return. It could be later this month. I drafted Thomas in the seventh round of my 14-team league. After a slow start to the season, I needed immediate help. So last week, I packaged him in a trade to land Antonio Brown, who helped me win this past week. Meanwhile, my opponent is thrilled to have an eventual WR2+ with massive upside. That’s what I mean by “win-win.” If you can afford to bench Thomas, trade excess baggage and reap the rewards later.

On Monday afternoon, I urged readers to sell high on the vastly overrated “bellcow” Latavius Murray. With trades, timing is everything. Wait too long, and the opportunity is gone. Here are some guys to trade away before their value tanks.

But don’t get fooled by the allure of high touches and goal-line carries. The Giants’ next two games are against the Rams and Panthers. Booker is a journeyman back with sub-4.0 career yards per carry. New York’s passing attack is currently in shambles. This offense doesn’t have much of a chance. Booker is more useful as a trade chip than as a fantasy starter.

And that, my friends, is how we analyze trade value. Publicly, Sanders is worth a lot. Between us, he’s due for a major regression. It’s inconceivable that he will continue to be Buffalo’s No. 1 fantasy wideout. So trade him away, knowing the probabilities are on your side.