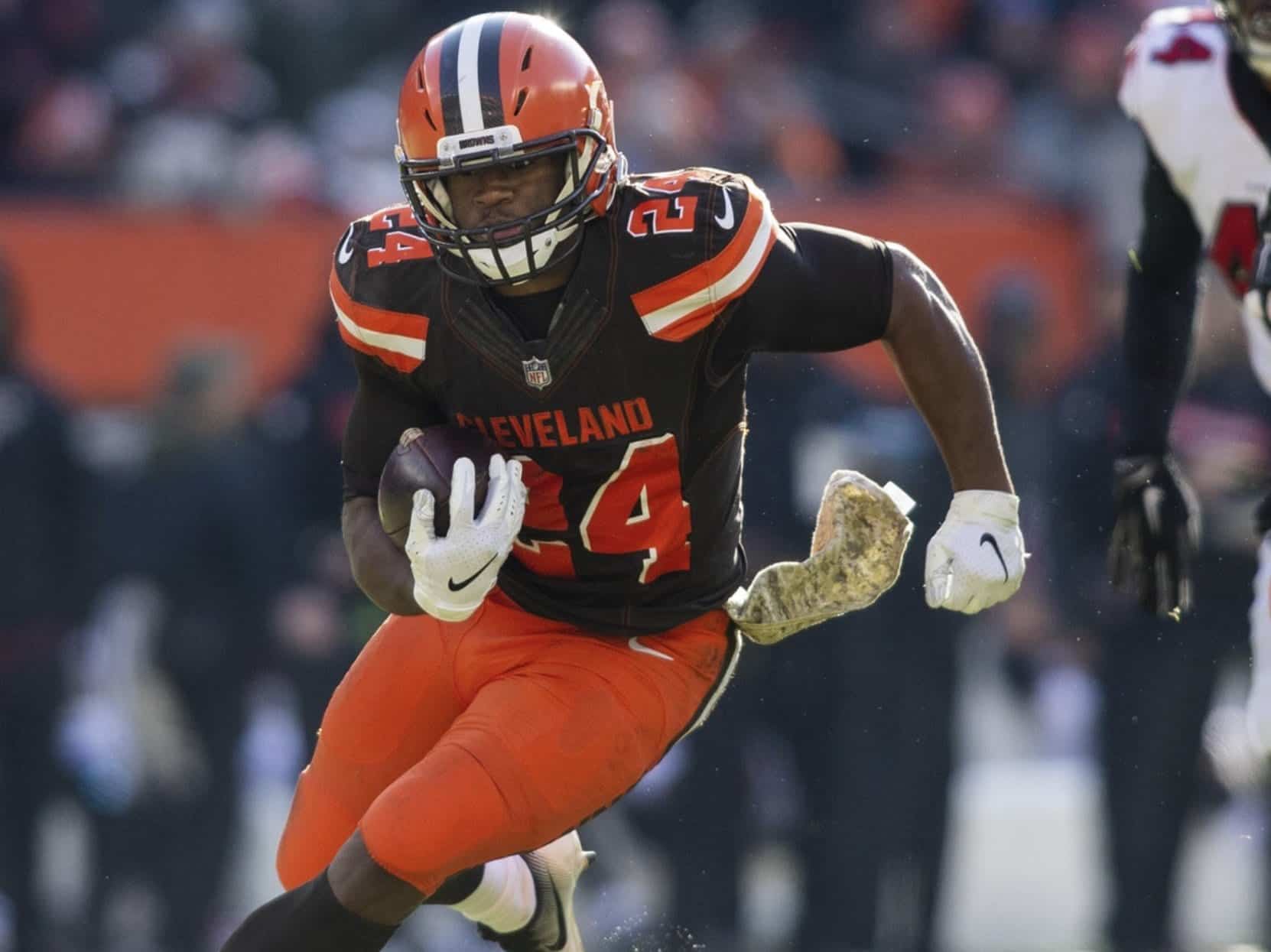 Week 4 in the National Football League is in the books, meaning we have passed the first quarter of the fantasy football season. Both individual players and their teams have started to prove whether performances were just outliers or actual trends we need to watch. The same is true for your own teams. Owners are realizing if they are a contender or a pretender destined to miss the playoffs for 2019.

There are performances every week that stand out amongst the pedestrian point totals, both good and bad. It’s up to owners to analyze the stats and determine what their players indeed did on the field. Here we will take a more in-depth look at some of the notable performances, or lack thereof, from Week 4 around the NFL.

Note: All point totals are based off one point per reception leagues from Sleeper.

Everything leading into the game on Sunday, said not to play Chris Godwin if you had a better option. Not only was he nursing an injury but he also was facing a difficult matchup against Nickell Robey-Coleman. Fellow WR Mike Evans was coming off his best performance of the year.

On top of that, Jameis Winston had shown that he could not sustain two fantasy football relevant WRs in a game. Godwin’s Week 4 stats is one of those cases where the process and results didn’t match up. He was able to find the holes in the defense and make defenders miss all day long. Winston’s inaccuracy on deep throws matches perfectly with Godwin’s ability to turn a massive gain out of a short route. We saw that again on Sunday as only one of his catches was beyond 15 yards. 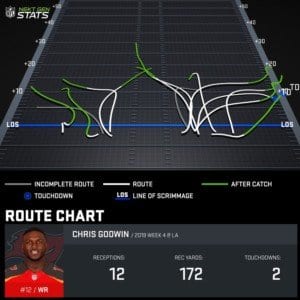 Godwin needs to be in starting lineups from here on out. Will there be frustrating games like Week 3 where Winston doesn’t look his way? Yes, but with three out of four games with high numbers, it’s a risk you have to be willing to take. Between both him and Evans, the Tampa Bay Buccaneers have a 1A and 1B at wide receiver.

While Gardner Minshew and his gutsy performance will be getting most of the talk, Leonard Fournette deserves just as much credit for the Jacksonville Jaguars comeback win against the Denver Broncos. Fournette was a real workhorse, reaching career bests in both carries (29) and yards (225) all while playing 86% of the teams snaps on Sunday.

The only thing that disappointed fantasy football owners was his inability to get into the endzone for a score. It wasn’t for lack of trying as he had eight rushes in the red zone, including one target. Fournette has been off to a slow start this year; Nick Zeller-Singh broke this down in the PFN Film Room earlier in the week. This game has all the signs of being a catapult for Fournette moving into the rest of the season.

If there is one pattern that fantasy football managers need to know for the rest of the season, it is to start tight ends going against the Arizona Cardinals. Will Dissly reinforced that by having a stellar day against the Cardinals. Through four weeks, the Cardinals have allowed 376 yards and six scores to opposing tight ends. Emerging as one of Russell Wilson‘s favorite targets in the red zone, Dissly has TE1 upside in “plus” matchups. After a miserable Week 1, Dissly has averaged 19.30 fantasy points per week and has four touchdowns in that stretch. While Dissly won’t score a touchdown every week, ride the hot streak while you can into next week’s game versus the Los Angeles Rams.

The Cleveland Browns needed this game in an attempt to silence the critics. Thus far, 2019 has not been the year both them and their fans thought it would be. Maybe fantasy football owners need to thank Rex Ryan for this performance as Nick Chubb and the Browns came out and had their best week yet.

Game plan wise, this was what the Browns need to continue to do. Allow Mayfield to throw quickly, getting the ball in his playmakers’ hands and use the speed of Chubb in an edge-rushing scheme to get him in space. Chubb can make a defender miss and take any rush the distance as he did Sunday, breaking off an 88-yard touchdown in the 4th quarter. If the Browns continue to use this game plan moving forward, Chubb can be a top-five running back every week in fantasy football. 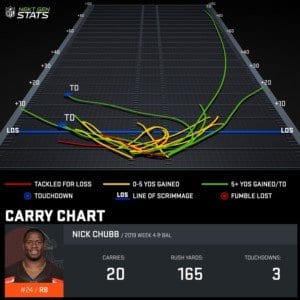 Sunday’s game was one of Tom Brady‘s worst fantasy performances of his career in which he played the whole game. If it weren’t for the New England Patriots stifling defense, they would have come out of Buffalo with a loss.

In fairness, the entire Patriots’ offense had a poor showing as their only touchdown came on a jet sweep to Brandon Bolden midway into the 1st quarter. It was clear Brady’s favorite target Julian Edelman wasn’t playing at 100%, as he came into the game with a chest injury and struggled to do anything with his opportunities. Week 5 can’t come soon enough for both the Patriots and fantasy football owners as they play the Washington Redskins. Make sure to check our rankings as Brady will likely be one of the top QB plays of the week.

Even though Baker Mayfield had his best performance of the year, Odell Beckham Jr. had his worst in Week 5. Mayfield was continuously looking to Jarvis Landry all game long, and never seemed to get in rhythm with Beckham. It took until the 4th quarter for Beckham to record his first catch.

One of the more intriguing plays of the day came in the 2nd quarter when the Browns gave Beckham the ball, making several defenders miss and nearly completing a deep pass to Damion Ratley. Landry received a concussion late in the game and has been entered into the NFL’s concussion protocol, leaving his status for the Browns’ Monday Night Football matchup against the San Fransico 49ers, in jeopardy. If Landry does miss the game, expect a bounce-back for Beckham as he will likely be the focal point of the Brown’s passing attack.

With T.Y. Hilton ruled out with a thigh injury, the Indianapolis Colts were thought to rely heavily on second-year running back Marlon Mack. Entering this game, Mack was third in the NFL in rushing yards, averaging 99.7 per game. However, the Colts quickly abandoned the run game after rapidly falling behind to the Oakland Raiders 21-7. After a solid showing in Week 3 against the Atlanta Falcons, Mack was never able to get anything going and left the game in the 2nd quarter with an ankle injury.  He would not return. In post-game comments, Mack said he could have played but was held out due to the coach’s decision.

Marlon Mack felt like he could have come back in the game, but the coaches decided to hold him out after he suffered an ankle injury. From @bytylerkraft https://t.co/RtgvRbCLDW

Mack’s ankle injury and status will need to be monitored leading into the Colts Week 5 matchup against the Kansas City Chiefs.

With one of the most bizarre stat lines you will see all season, DeAndre Hopkins was a near non-factor for the Houston Texans Sunday. Hopkins hasn’t looked like himself all season leaving fantasy football managers who spent a top-six overall pick on him disappointed.

After a two-touchdown game in Week 1, Hopkins has yet to score again or have 70 yards in a single game. Coming into the season as arguably the number one fantasy receiver, Hopkins currently sits at #21 overall in points scored. Not quite the return on investment fantasy owners were expecting, to say the least. No fantasy football analyst would ever recommend benching Hopkins because he will at some point, come back to form. Next week the Texans take on Julio Jones and the Atlanta Falcons in what could be the game Hopkins shows us why he was taken so high in drafts.