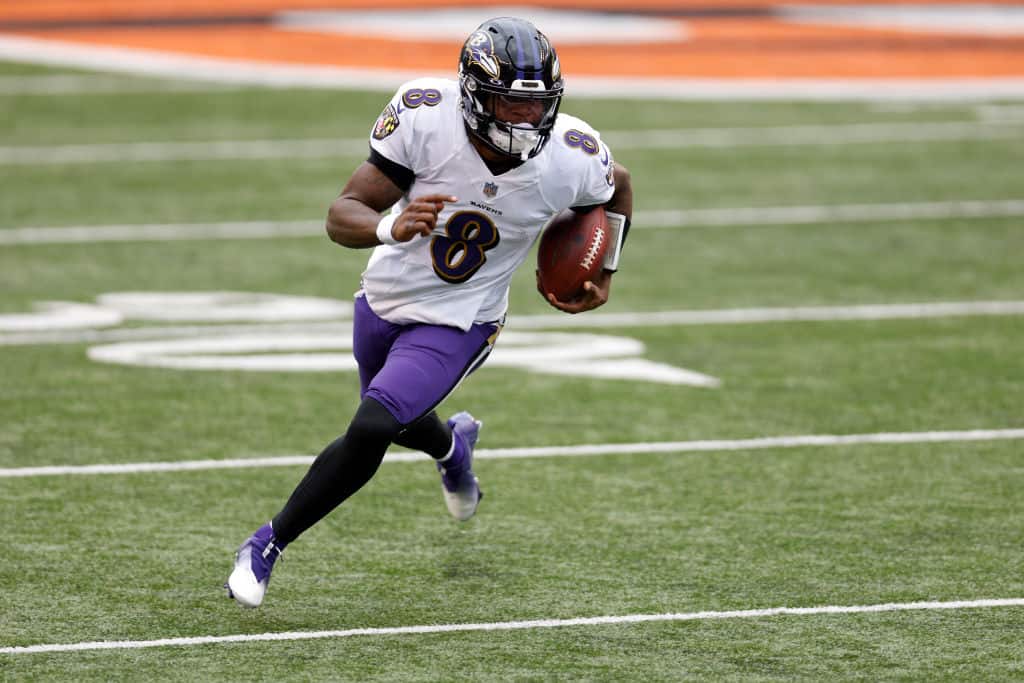 The playoffs are here, but with fantasy football still ongoing in various formats, which players are start ’em and sit ’em options? Let’s take a look at the week ahead using our Fantasy Football Consistency Score (CS) and Defensive Points Allowed Consistency Score (D-PAC). Using these metrics, we will highlight the best and worst playoff matchups for fantasy football to let you know whether you should consider the likes of Lamar Jackson and David Montgomery as start ’em or sit ’em options.

If you would like more detailed information on how the CS and D-PAC works, please refer to the Introduction to the Fantasy Football Consistency Score. However, the premise is mostly straightforward. The higher the CS, the more consistent a player is scoring high-level fantasy points. In the case of D-PAC, the higher the number, the more consistently that team allows high-level fantasy points to the position.

This is an easy decision to kick off our playoff start ’em sit ’em fantasy column. No playoff team allows more points to opposing QBs in fantasy than the Titans (20.8). Additionally, they rank as the third-easiest matchup in Defensive Points Allowed Consistency Score (D-PAC).

Given the conversation around Jackson’s struggles for fantasy in 2020, he still ranked as the third-best QB in Pro Football Network’s Consistency Score (CS). In the last five weeks, Jackson topped 20 fantasy points in each game, averaging 27. This game could be another thriller for the Titans, with high scoring potential on both sides. The Ravens have already seen their run first approach fail against the Titans, so look for them to air it out this weekend.

Another relatively easy decision for a QB who has struggled at times this season. Mayfield scored a combined 21.5 fantasy points in the two games against this Steelers defense in 2020. The Steelers rank as the tough fantasy test for opposing QB in terms of D-PAC. They are also the second-toughest defense in terms of average fantasy points allowed.

Which running backs should you start/sit in fantasy football Wild Card Weekend?

The Titans have also struggled against the run game this season, which is music to the ear of Ravens RBs. The Titans D-PAC highlights them as the second-best matchup in the league for the running back position.

J.K. Dobbins ranks second at the position in Fantasy Points Differential (FPD). On average, he scores 44% more fantasy points per touch than an average running back. At six yards per attempt, he ranks as the best RB in the league in that stat among qualifiers. Additionally, his nine touchdowns tie him for 11th in the league in rushing touchdowns, among the best in the position when it comes to touchdowns per rush attempt.

David Montgomery has had a superb finish to the season. In the last six weeks, Montgomery has scored over 18 fantasy points in every game, averaging 21.7 in standard formats. He ended the season as the 10th ranked RB in CS.

However, this week, Montgomery will have a tough day. Back in Week 8, he managed just 10.5 fantasy points in this matchup. The Saints defense ranks as the toughest matchup in terms of D-PAC. As good as Montgomery has been recently, this is not a time to risk a bad week at the running back position from a player who likely only plays one week in the playoffs.

What receivers should you start ’em/sit ’em in playoff fantasy football for Wild Card Weekend?

Just once this season did Marquise Brown fail to score a fantasy point. That game was against the Tennessee Titans. However, since then, Brown has played superbly. In the following five games, Brown has five touchdowns, 338 receiving yards, and 26 receptions on 41 targets. The Ravens have made a concerted effort to get Brown more involved, and I expect that to continue this week.

At an average of 43.92 fantasy points allowed per game, the Titans defense is vulnerable to the receiver position. They rank as the seventh-easiest matchup for opposing receivers in terms of D-PAC. Take the chance on Brown this week; he just might reward you.

One player who has struggled down the stretch is Metcalf. In the past five games, Metcalf has scored double-digit standard format fantasy points in just one game. In the final three games, he scored a total of 12.3 fantasy points in standard and 26.3 in PPR formats.

This week, Metcalf goes up against a defense that ranks as the best in the league against the wide receiver position. In his two games against the Rams this season, Metcalf has scored 8.7 standard scoring fantasy points. He has just 87 receiving yards and zero touchdowns on eight receptions from 12 targets in those two games. As talented as Metcalf is, the Rams appear to have figured out how to defend him. Do not let another poor performance against the Rams derail your fantasy playoffs.

Which tight ends should you trust or be cautious of on Wild Card Weekend?

At 9.81 points per game, the Bears allow the fifth-most fantasy points to opposing tight ends in standard formats. They also rank as the third-best matchup in terms of D-PAC. In PPR formats, they rank fourth in points allowed and second in D-PAC. Even with Michael Thomas and Alvin Kamara potentially back this week, Cook should be a solid option to anchor your team at the tight end position.

Hooper is another tight end who has finished strongly. In his last three games, he has 26 targets, 16 receptions, 149 receiving yards, and two touchdowns. In those three games, he has scored 26.9 fantasy points in standard formats and 42.9 in PPR. One of those games included this week’s opponent, the Pittsburgh Steelers.

However, on the season, the Steelers rank as the toughest matchup for tight ends in terms of D-PAC. At 8.59 PPR points allowed per game, only the 49ers allow fewer to the position. Benching a player who is playing well is tough, but the Steelers rested some key players. In their earlier game, when the Steelers were at full strength, Hooper managed just 52 yards on five receptions from six targets.

Be sure to follow us on Twitter @PFN365 to stay up to date with all things around the NFL and the 2020 fantasy football season. Also, continue to visit Pro Football Network for NFL news and in-depth analysis while also visiting our fantasy football section for more coverage and up-to-date rankings