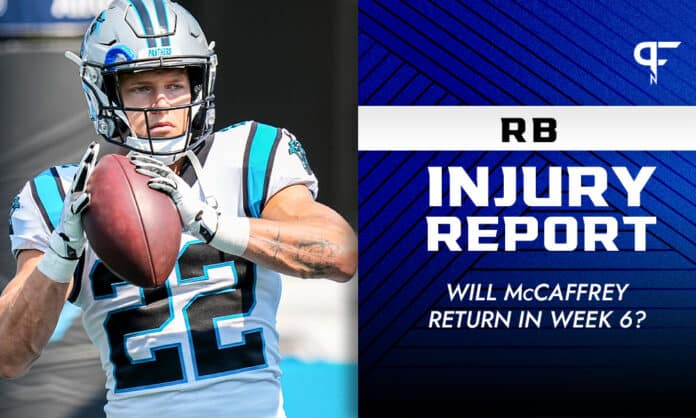 As RB injuries continue to mount for fantasy managers, what is the latest injury report update regarding some key names in Week 6?

Heading into Week 6 of the 2021 season, what information do we have on RB injuries, and how will they affect your fantasy football lineups? Which RBs do we expect to appear on the injury report this week? Check back all week for fantasy injury updates and reports.

There is nothing new on Saquon Barkley Tuesday. He is out this week and likely next week as well. The Giants and fantasy managers will have to take it from there. Devontae Booker will start in the interim.

We did not get any update on Chris Carson’s neck injury on Tuesday. His participation in practice — or lack thereof — will provide insight into his status for Sunday night’s trip to Pittsburgh.

There was no news on Dalvin Cook’s status heading into Week 6. Cook missed last week’s contest to rest his sprained ankle. His participation level at practice will tell us more about his status for this week’s game.

On Tuesday, the Chiefs placed Clyde Edwards-Helaire on the injured reserve. That guarantees he will miss at least three weeks, but it will likely be in the 4-6 week range. Darrel Williams and Jerick McKinnon will hold it down until CEH returns.

There was no update on Christian McCaffrey Tuesday. But barring a setback in practice, he is going to return from a two-week absence on Sunday.

The Bengals placed Samaje Perine on the COVID-19 list Monday. It is unclear whether this is due to a positive test or contact tracing. Perine would need two negative tests 24 hours apart to return to the team. That is unlikely to happen ahead of Sunday. Cincinnati signed Elijah Holyfield to their practice squad in anticipation of Perine being out.

Joe Mixon looked like his usual self last week — aside from the part where he was clearly the backup and played just 28% of the snaps. I would expect Mixon to see closer to his normal workload against the Lions while rookie Chris Evans assumes the change-of-pace role.