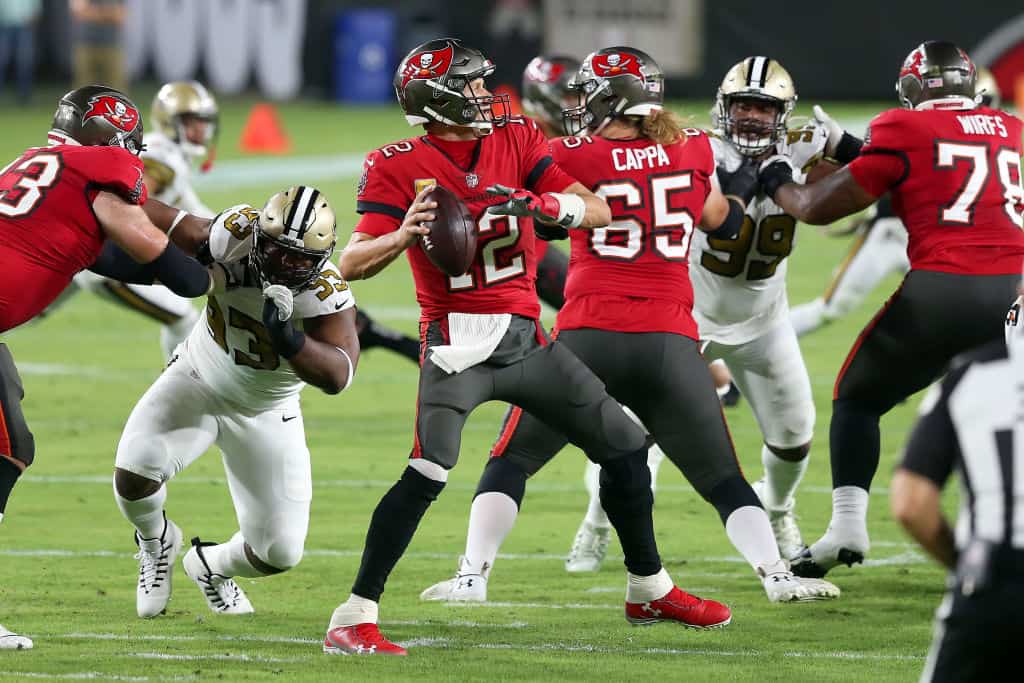 With the final game of the 2020 NFL season taking place today, it brings us to the end of fantasy football leagues for the season. With playoff fantasy football fortunes hanging in the balance, how do the Super Bowl players fall in our rankings?

I expect we see both quarterbacks throwing the ball plenty in this matchup. However, the Buccaneers’ defense is one of the best in the league against the run game. Therefore, there should be more pressure on Mahomes to make plays for his team.

Additionally, Mahomes is more likely to rush for 20-30 yards than Brady is. Those two or three points could ultimately be the difference.

Even with the run game that should be superior, Brady can still be a valuable fantasy asset in this matchup. Brady has thrown 15 touchdowns in the last five weeks and has only been under 200 passing yards once. If you play in a league with a salary cap, and Brady is the cheaper option, he may return a better value on a points per cost basis.

Top 5 fantasy running back rankings for the Super Bowl

In the playoffs, Leonard Fournette has rewarded the Buccaneers for their faith in him. Fournette has carried the ball 48 times for 211 yards and 2 touchdowns in the last three games. He has added 14 receptions on 17 targets for 102 yards and a touchdown.

Similarly, it has been Williams who has stepped up for the Chiefs. Williams has 26 carries in the last two weeks for a total of 130 yards. He added a rushing touchdown last week and has 5 receptions on 5 targets for 25 yards. His floor appears lower than Fournette, but Damien Williams proved in last year’s Super Bowl that a Chiefs running back can certainly have a high ceiling.

Who is the best running back to take a chance on among the backup options?

Despite the success of Fournette in recent weeks, Jones has had a solid role as well. He missed the Wild Card Weekend matchup but has 23 carries for 78 yards in the last two weeks. If Fournette was to get injured, Jones could have high usage.

For the Chiefs, Edwards-Helaire is the first name on the list regarding potential options after Williams. He had six carries in the AFC Championship Game. While he only managed 7 yards on 7 carries, he found the end zone. His floor is not as high as Jones, and given the Buccaneers’ run defense, his ceiling might also be lower.

Bell is the X-factor here in this game. He missed the last game with a knee injury, but his upside is well known. If you are looking for a “shoot the moon”-type play in your fantasy lineup, then Bell might very well be that player.

The clear leader in the clubhouse here is Tyreek Hill. He has played superbly in the playoffs and dominated the Buccaneers’ defense in their last matchup. The great thing about Hill is that he can put up monster numbers on just a handful of targets. However, it is rare he isn’t heavily targeted, and he could be in for a big day against a secondary he has torched once already.

Mecole Hardman is the boom-or-bust play at receiver

Hardman’s speed makes him an enticing option in any single game fantasy format. Against the Buffalo Bills, he had just 2 catches for 4 yards. However, he scored a touchdown and added 50 yards on a run play.

Much like Bell, Hardman is an X-factor for this offense. Yet, you have to be willing to accept that the volume in any given game can be low. If he breaks one big play, he is giving you a good return on investment. There is definitely risk here, but the reward could be sweet indeed.

The trio of Tampa Bay receivers could all succeed

Chris Godwin is the workhorse of the three Buccaneers receivers, and therefore, tops this group in terms of Super Bowl fantasy football rankings. In the last three games, he has 28 targets for 223 yards and a touchdown. He finished the season strongly and appears to be Brady’s top weapon right now. The potential return of Antonio Brown does hurt his ceiling, however.

Mike Evans is the true ceiling play of the Buccaneers’ receivers. As a red zone threat, he can easily see 2 targets all game and post 2 touchdowns. He has 21 targets in the playoffs, which he has turned into 10 receptions for 173 yards and 2 touchdowns.

Prior to the game against New Orleans, Antonio Brown had caught five touchdowns in four weeks. If he is fully healthy, he could end up returning incredible numbers. On just 3 targets against Washington, he pulled in 2 catches for 49 yards and a touchdown.

If you are picking a tight end to head up your Super Bowl fantasy football team, Kelce naturally tops the rankings. In the last six games, Kelce has seen double-digit targets and has nine such games in the last 10. In the past two weeks, he has turned 25 targets into 227 yards and 3 touchdowns. He has now scored at least one touchdown in each of the last six weeks.

Entering the game, Cameron Brate is not assured to be on the field. If he is, Brate is the play over Gronkowski. In the three playoff games in 2020, Brate has 11 receptions for 149 yards and a touchdown. He has seen 16 targets in those last three games and appears to be a player Brady trusts more and more.

Gronkowski is still Brady’s guy at the position, but his role has dwindled in the playoffs. He has just 7 targets for 2 receptions and 43 yards in the playoffs. Gronkowski has been used as much as a decoy at times in these playoffs. If the Chiefs switch their focus to Brate, Gronkowski could end up being a difference-maker in this game and for your fantasy football team.