We have reached Week 8 in the NFL, marking the halfway point for fantasy football as well. As discussed last week, the longer into the year we get, the more and more weather is going to play a factor. The story of Week 8 appears to be either you have your players playing in a dome, or they will be in poor weather conditions.

In my article last week, I discussed my concern for several games, but mainly what the forecast was saying for the Washington D.C. area. Although it was fun as a fan to watch them attempt to play in a downpour, the field deteriorated to a point where it was useless for fantasy football. The effect of the rain was seen as usual in the lack of any passing game. Washington Redskins’ phenom rookie Terry McLaurin came into the game averaging 18.76 points per game but posted a season-low 2.10 in PPR scoring.

As of right now, there are several games this week that give me pause for concern and need to be watched leading up to kickoff. With the remnants of Tropical Storm Olga continuing to move across the South and a wet weather forecast for the Northeast, critical lineup decisions will need to be made. Now let’s take a closer look into the Week 8 weather forecast and their fantasy football impacts.

Rain, as we know, isn’t good for fantasy football. Rain, along with high winds, is even worse for scoring. I have been watching this forecast to see if the weather will break up for the game, but it doesn’t look like that will happen. The forecasted severity of the rain has decreased a bit but totals up to 1/4″ are still possible during the game. Rain will be easy to notice on TV as well as radar, but the wind is harder to pick up on.

Currently, 25-35 mph winds are expected and will be a nightmare for any mid to deep passing games and especially kicking. For a quarterback like Josh Allen, who wants to take several deep chances, that won’t be nearly as successful in this wind as both passing games get a downgrade in this game. On paper, a matchup up against a Philadelphia Eagles’ pass defense that gives up on average 287.9 yards per game, would be a terrific play in your lineup. Given the forecast, however, I would stay away from this game if you have better options.

Only running backs look to get any real consistent work here on sheer volume alone and even then carry their own risk depending on how much rainfall occurs.

Tropical Storm Olga remnants are pushing across the South and are going to show up in this game as well. Starting cloudy in the morning, storms will begin to form around 11:00 AM and increase in severity into the afternoon. The high winds from Saturday look to move off, but 10-15 mph winds are expected and will be an impact on the kickers more than anything.

Footing may be an issue, and both teams need their training staff to be ready as rain will be soaking the field for a solid 24 hours before kickoff. If the storm hits like we think it will, both Le’Veon Bell and Leonard Fournette will be high volume plays as their teams try to play a more conservative game plan. I would fade the New York Jets’ passing game and Sam Darnold here if you have better options on your team.

If going against the odds-on Super Bowl favorites wasn’t enough, mother nature wanted to step in too for Baker Mayfield and the Cleveland Browns. Foxborough currently looks to have the highest rainfall of the day and could near an inch in total before it’s all over. The rain will be accompanied by 10-15 mph winds, making trusting players for fantasy football in this game harder.

New England’s defense already was a solid play, but given the weather forecast and increased chance for turnovers, I would have no issue starting them in your lineup. Tom Brady got a new weapon this week after the New England Patriots traded for Mohamed Sanu from the Atlanta Falcons. He could see some early work in short to intermediate routes. This trade made more sense after the Patriots put Josh Gordon on IR and isn’t expected to be back with the team once he returns to action. Expect lots of short, dump-off passes and a steady dose of running plays in this game.

Fantasy football owners get a break from the rain when we move out West, but the wind is the main story here. Deep passing and kicking will be profoundly affected here as 25-35 mph winds are expected with gusts up to 40 mph to be seen. While not game-related, this is a worst-case scenario for the Bay Area, which is currently dealing with widespread wildfires. If you are in the area of this, please take caution and closely monitor all emergency service updates and weather forecasts as fires can jump dangerously quickly with these conditions.

The Carolina Panthers have ruled Cam Newton out for Week 8 again and will lean on the fantasy football MVP of the first half of the season in Christian McCaffrey. Newly-acquired wide receiver Emmanuel Sanders and tight end George Kittle are the only pass catchers worth starting for the San Francisco 49ers here.

While 10-15 mph winds will be felt, I’m not overly concerned with them other than for kickers. However, Chicago Bears kickers haven’t been a fantasy football commodity in recent years anyway. What remains to be seen is the split in work between Melvin Gordon and Austin Ekeler in a tough matchup. In their first game without run-stopper Akiem Hicks, the Bears gave up 119 yards and 2 touchdowns to Latavius Murray. With Keenan Allen’s status questionable, similar results could happen here if the Los Angeles Chargers look to rush the ball more in his absence.

After a promising start after the move to Ryan Tannehill at quarterback, the Tennessee Titans look to continue that momentum in Week 8. With the fantasy football trade deadline quickly approaching, I would be trying to get both Corey Davis or A.J. Brown, especially in dynasty formats, while you can. The 67-degree temperatures, mostly cloudy skies, and seven mph winds won’t be a concern for this game.

Todd Gurley gets his best matchup of the season here against the Cincinnati Bengals, who have the worst rush defense in the NFL. Malcolm Brown has been ruled out for Week 8, making Darrell Henderson a Flex-worthy play in fantasy football if you have players on a bye or if you are trying to avoid poor weather. The perfect 71-degree temperatures, partly cloudy skies, and eight mph winds will have no impact here.

After flirting with a potential early return, the Kansas City Chiefs ruled QB Patrick Mahomes out and will use backup Matt Moore as their Week 8 starter. On the other side, Aaron Rodgers will be missing his favorite WR Davante Adams again, as he is still dealing with a turf toe injury. This week’s 60-degree temperatures, partly cloudy skies, and five mph winds won’t be a worry here.

Primetime football comes to Pittsburgh and good weather forecast along with it. Rumors are still circling as to a potential trade of RB Kenyan Drake, but for now, he and the rest of the Miami Dolphins remain hard to trust for fantasy football. Monday night’s 51-degree temperatures, clear skies, and three mph winds won’t be a concern.

Be sure to follow us on Twitter: @PFN365 to stay up to date with all things around the NFL. Also, continue to visit Pro Football Network for NFL news and in-depth analysis while also visiting our Fantasy Football section for more coverage and our weekly rankings for both standard and PPR scoring. 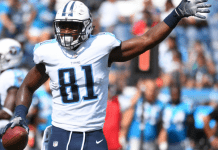