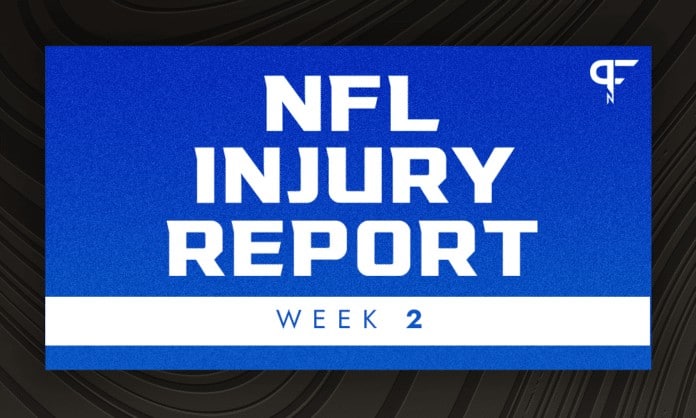 With the 2021 NFL season officially underway, here are some updated injury reports to keep in mind for your Week 2 fantasy football lineups.

The unfortunate reality of the return of the NFL is when players are allowed to go full speed — injuries are bound to happen. Week 1 of the NFL season was no exception. Now that fantasy football managers are updating and finalizing their lineups, several players have found themselves on the injury report with only a few hours until kickoff, leaving their status for Week 2 in the air.

Here is where we currently stand in terms of the fantasy football QB option dealing with an injury.

According to ESPN Insider Field Yates, the Raiders have placed Mariota (quadriceps) on the injured reserve. Mariota has been active for just six games since signing with the team in 2020 and has played in two. He originally suffered the quadriceps injury during an early practice in August.

Let’s see how the injury bug is affecting RB committees in Week 2.

Swift (groin) is listed as questionable for Monday’s game against the Packers. However, Dave Birkett of the Detroit Free Press reports Swift will be available for the primetime matchup against the Packers. In the opening game, Swift had 11 carries for 39 yards and 8 receptions on 11 targets for 65 yards and a score.

Mostert announced on his social media account that he would undergo season-ending knee surgery after consulting with multiple doctors. Elijah Mitchell is the likely RB1 for the 49ers but has competition from fellow rookie Trey Sermon and an extensive list of other RBs on the depth chart. Nevertheless, he is a must-start in Week 2.

According to Turron Davenport of ESPN, Penny is officially listed as doubtful for Sunday’s game against the Tennessee Titans. Head coach Pete Carroll stated Penny wouldn’t play after missing practice all week (calf).

The Raiders have ruled Jacobs out for Week 2 (ankle/toe) against the Pittsburgh Steelers. Kenyan Drake, who the team signed to a two-year deal in the offseason, will be the leading back in Week 2. Head coach Jon Gruden expressed excitement for RB Peyton Barber as well, making for a messy backfield.

Despite his progress, head coach Kevin Stefanski elected not to play Odell Beckham Jr. on Sunday against the Kansas City Chiefs. That trend will carry over into Week 2 as Beckham (ACL) has been ruled out, according to Nate Ulrich of the Akron Beacon Journal.

According to NFL Network’s Tom Pelissero, X-rays on Jeudy’s ankle were negative, believing he suffered a high ankle sprain. Mike Klis of 9News confirmed these reports and stated the Broncos believe Jeudy will be sidelined 4-6 weeks with that high ankle sprain. The team also placed Jeudy on the IR.

Expect Courtland Sutton to be thrust back into the spotlight (ACL tear in 2020). Furthermore, KJ Hamler, Tim Patrick, and Noah Fant will see increased reps.

After serving the final game of his suspension, Will Fuller will not make his return in Week 2, citing personal reasons. Head coach Brian Flores declined to comment further. He stated the team is handling it “day by day,” leaving many to wonder about Fuller’s long-term future.

Jonas Shaffer of The Baltimore Sun reported that Marquise Brown missed practice for the second straight day on Thursday. However, Brown returned to practice Friday and has no injury designation for Sunday’s matchup against the Kansas City Chiefs.

Davis remained limited in Friday’s practice with an ankle injury. He is listed as questionable for Sunday’s matchup with the Dolphins. Davis caught 2 of 5 targets for 40 yards and a touchdown against the Steelers in Week 1. Should he miss time or see his snaps limited, Emmanuel Sanders could be in line for a big week for fantasy.

SiriusXM NFL Radio’s Adam Caplan mentioned that Mooney (back) is listed as questionable for the Bears’ matchup against Cincinnati. He is expected to play.

According to Tim Twentyman of the Lions’ official site, Williams (concussion) has been ruled out of Week 2 as he has yet to clear concussion protocol.

Eskridge (concussion) was ruled out ahead of Sunday’s contest against the Titans.

Pharaoh Brown (shoulder/ankle) was a limited participant on Friday after recording a DNP the day before. Brown was a surprise performer in Week 1, hauling in 4 of 5 targets for 67 yards. He is officially listed as questionable for Week 2.

According to Mike Reiss of ESPN, Jonnu Smith (hip) was added to the Patriots’ injury report on Thursday as a limited participant. He was officially listed as questionable for Sunday’s game.

According to the team’s final injury report, Ertz (hamstring) was a full participant.