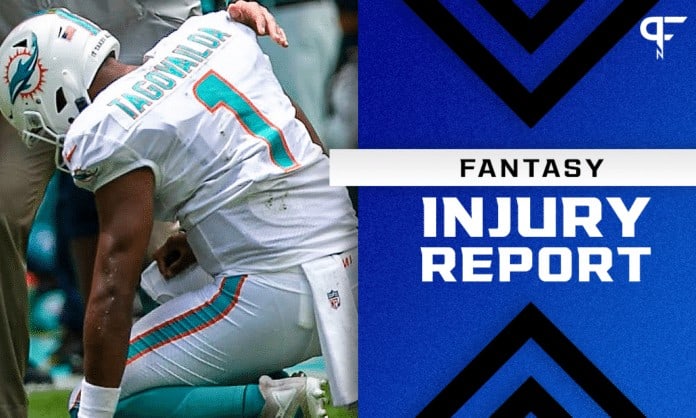 With the 2021 NFL season reaching full gear, here are some updated injury reports to keep in mind for your Week 3 fantasy football lineups.

The unfortunate reality of the return of the NFL is when players are allowed to go full speed — injuries are bound to happen. Week 2 of the NFL season was no exception. Now that fantasy football managers are updating their lineups for the coming week, several players have found themselves on the injury report, leaving their status for Week 3 in the air.

Tagovailoa left Sunday’s game in the first quarter with a rib injury, getting carted into the locker room after taking a shot from Bills defensive end A.J. Epenesa on a failed fourth-down conversion. According to NFL Network’s Tom Pelissero, Tua suffered bruised ribs. X-rays were negative, but Pelissero reported he is in a lot of pain and will receive an MRI on Monday [September 20]. Veteran quarterback Jacoby Brissett replaced him and would be the starter should Tua miss Week 3 or beyond.

Taylor left Sunday’s 31-21 loss to the Cleveland Browns with a hamstring injury and was replaced by rookie quarterback Davis Mills to start the second half. The Texans have a short week in Week 3 as they face the Carolina Panthers on Thursday Night Football.

Dalton left the game with a non-contact injury after scrambling out of bounds during a play in the first half. Dalton came up limping and went to the locker room shortly after for further evaluation and was replaced by rookie Justin Fields. After the game, Bears head coach Matt Nagy said that they would know more about Dalton’s knee injury in the next 24-48 hours, but he does not believe that Dalton suffered a serious ACL injury.

Fields went 6/13 for 60 yards, no touchdowns, and an interception. He added 10 carries for 31 yards on the ground and led a pair of field-goal drives. With a full week to prepare, Fields will have mid-QB2 value in Week 3 against the Cleveland Browns.

After an overthrow leading to an interception, Mayfield attempted to make a tackle and suffered an injury to his non-throwing shoulder. After showing clear discomfort, he jogged to the locker room for further evaluation. Mayfield would return and finish the game, going 19/21 for 213 yards with a TD and an interception.

Let’s see how the injury bug is affecting RB committees heading into Week 3.

Brace yourselves because the No. 2 overall pick in fantasy drafts is now on the injury radar. Halfway through the fourth quarter, Cook received a handoff and was tackled from behind. He stayed down on the field for a short time and walked off gingerly while being escorted by trainers. It appears to be a lower-leg injury, but the best thing to do is cross your fingers until we know more.

Henderson was helped off the field in the fourth quarter against the Indianapolis Colts with a rib injury. Henderson had 13 carries for 53 yards and a touchdown, as well as 3 catches for 29 yards before leaving the contest. After the game, head coach Sean McVay had no updates on Henderson’s status, and it is unknown if he could miss any time. The Rams are already down three RBs and would rely on Sony Michel as their RB1 should Henderson stay on the sideline.

No, I am not just listing San Francisco’s depth chart. All three RBs suffered injuries in Week 3.

Mitchell injured his shoulder in the second half, but luckily enough, he was able to return. However, this does not mean he has escaped injury. Head coach Kyle Shanahan said after the game, “He said he was good enough to come back in, so that’s when you think it’s a stinger. But until you have time to go get an MRI and stuff, you never know. But hoping it was just a stinger.”

It was an unceremonious start to Sermon’s career, suffering a concussion on the first carry of his career after a helmet-to-helmet hit. He will enter the NFL’s concussion protocol.

With many looking for Mitchell to have a big game, Hasty was the better-looking RB in Week 2. Hasty had 9 touches for 59 yards from scrimmage before his departure (ankle) in the fourth quarter. We will await further updates on his status throughout the week.

The last thing the Browns needed was another WR to go down with Odell Beckham Jr. yet to return. And it’s not just any WR — it’s Jarvis Landry. According to Nate Ulrich of the Akron Beacon Journal, Landry suffered an MCL injury. Landry sustained the knee injury on the opening drive Sunday and was quickly ruled out.

With the game out of reach and the Steelers down two possessions, an injury to Diontae Johnson as time expired was the definition of adding insult to injury. After a second straight game of double-digit targets, Johnson suffered a lower-body injury on the game’s final play. As teams were shaking hands after it was over, trainers helped Johnson off the field.

In a 17-17 game with 46 seconds left in the fourth quarter, Cooper hauled in a short pass but stayed down on the field after taking a hit by two defenders. With Michael Gallup on the IR (MCL), any missed time for Cooper is a massive blow to the Cowboys’ offense.

Texans rookie receiver Nico Collins sustained a shoulder injury during the first quarter of Sunday’s Week 2 matchup with the Browns. He was ruled out for the remainder of the game per the Texans’ PR.

After recording 1 catch on Sunday, Amendola suffered a hamstring injury and did not return to the game.

O’Shaughnessy suffered an ankle injury in the first half after playing 3 offensive snaps. Despite recording just 1 catch for 24 yards, he ended the game as Jacksonville’s second-leading receiver.