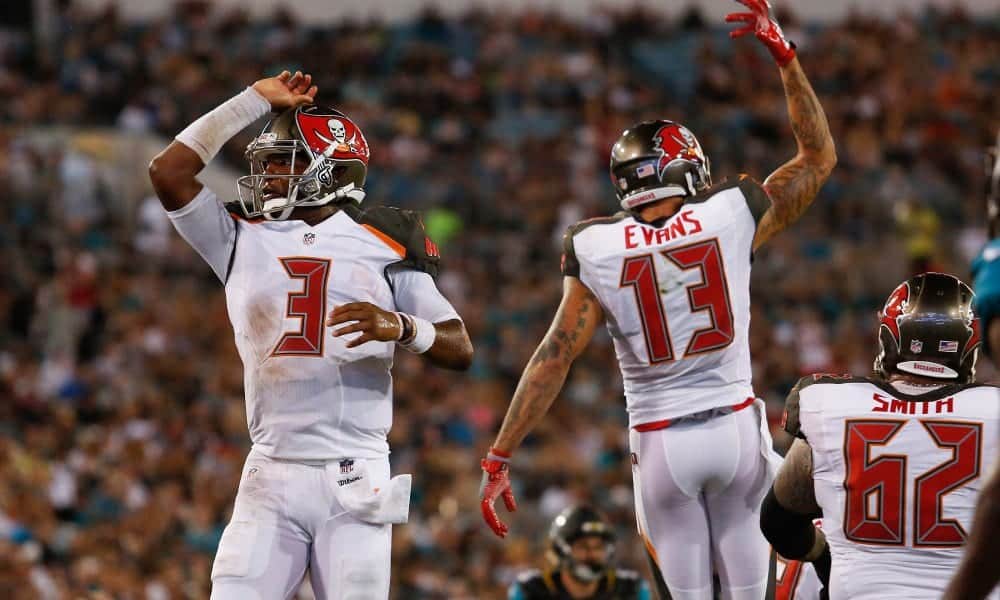 Another week has now passed us in the National Football League, and fantasy football owners are starting to conclude who the players they drafted really are. We go into every draft season thinking we have cracked the code for perfecting this game and have the edge over our competition. However, reality doesn’t take long to set in before we understand sometimes all the preparation in the world will not be enough. So let’s start by diving into some of the critical performances of Week 3 of the NFL season.

As a note, all fantasy scoring is based on one point per reception leagues from Sleeper.

Fantasy football owners who invested an early pick on Mike Evans can exhale after the Tampa Bay Buccaneers wide receiver had his best week so far. Evans more than doubled his first two weeks production and tripled his total fantasy points leading into this week. The question of whether Evans was still the number one receiver for Jameis Winston and the Buccaneers, for this week at least, was answered. Fantasy owners hope this is a springboard moving into the rest of the season. However, Winston has not been able to support two top-24 wide receivers, which makes picking who will be his favorite for that week a bit of a task. 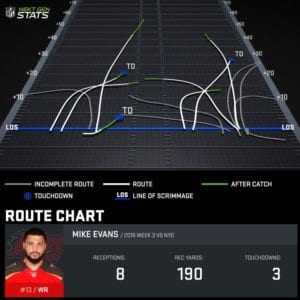 Alvin Kamara and the New Orleans Saints were full of questions on how they would look after having to replace former All-Pro quarterback Drew Brees. Kamara put the team on his back and gave us a season-best performance leading the team in almost every statistical category. The game plan for the Saints appears to have Teddy Bridgewater check down to Kamara and allow him to use his elite athleticism to do the rest of the work. 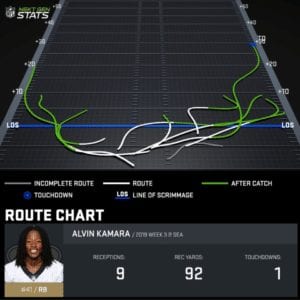 While the wide receivers might see a drop off in production, Kamara seems to be safe from any drop-off and will remain a top tier play regardless of matchup.

In a game that featured one of the best quarterback matchups from the AFC in Patrick Mahomes and Lamar Jackson, Mark Ingram did the heavy lifting for the Baltimore Ravens. A rain-soaked Arrowhead Stadium couldn’t slow down these offenses in what was a very fruitful game for fantasy football owners on both teams.

The industry consensus thought another excellent performance from Jackson was coming. However, Lucas Ellinas used the PFN Offensive Share Metric (OSM) in the PFN Data Lab to predict that a regression to the mean was coming in Week 3. Ingram took advantage of this matchup, as he cashed in on 2 touchdowns from inside the two-yard line as well as a 19-yard touchdown. Ingram continues to be an overlooked quality fantasy asset as he and the Ravens move into a Week 4 matchup at home against their division rivals, the Cleveland Browns.

Did you think we could do an article about standouts from Week 3 and not mention New York Giants quarterback Daniel Jones and his record-setting performance?

During the Giants' 32-31 win at Tampa Bay, Daniel Jones became the first NFL rookie QB with at least 300 passing yards, two passing touchdowns and two rushing touchdowns in a single game since 1970.

Jones came out and had the second-best performance of any quarterback across the NFL in Week 3, trailing only Russell Wilson in his debut. The only person who was smiling more than fantasy football owners after this game was Giants general manager Dave Gettleman. Jones showed off all the traits that led the Giants to draft him at number six overall in the 2019 NFL Draft.

While the Giants lost Saquon Barkley to a high ankle sprain which Ryan Gosling covered earlier, his wide receiver corps is improving just in time. Week 3 saw the return of Sterling Shepard from his broken thumb suffered in the preseason and Golden Tate will rejoin his team from suspension in Week 5. Jones looks to continue this hot streak going into a favorable matchup against a vulnerable Washington Redskins defense.

With Rashaad Penny out as a late scratch due to a hamstring injury, this was the best opportunity Chris Carson had to take control of the Seattle Seahawks backfield firmly. Fifteen carries and one lost fumble later, the Seahawks knew their only hope was to rely on Russell Wilson to get the win. After ending the 2018 season where Carson averaged 17.67 points in the final seven weeks, expectations were high coming into 2019 that he could hold off Penny from being in a timeshare. This offense, however, is only as productive as Wilson is, making Carson a hard to trust flex play moving forward. Even after losing a fumble in all three weeks so far this season, it seems head coach Pete Carroll isn’t ready to give up on Carson just yet.

Pete Carroll today again supported Chris Carson as his lead RB after 3rd (really 4th) lost fumble in three games: "Because we do believe in him, we are going to continue to show him that."

Quite honestly, the draft picks fantasy football owners spent on Minnesota Vikings wide receiver Stefon Diggs have been complete wastes. Diggs has yet to surpass the 50-yard mark in a game or receive double-digit targets as well.

Believe it or Not❓

Stefon Diggs should be benched in Fantasy until MIN plays against a strong offense. pic.twitter.com/4UJfH5hulN

The Vikings of 2018 that relied on their star-studded duo of Diggs and teammate Adam Thielen has shifted to a run-first offense behind a healthy and league-leading Dalvin Cook. This offense in its current form isn’t capable of sustaining two top-24 wide receivers, and Diggs is the odd man out through three weeks. While I can not advocate dropping Diggs, he can’t be trusted in starting lineups right now. If Diggs does have an excellent performance, I would be looking to sell him off to someone else.

The days of Todd Gurley being the fantasy football star for the Los Angeles Rams we saw last year are gone. This hotly debated topic swirled around the 25-year-old running backs arthritic knees and how the much the Rams would be willing to use him. Although he saw a season-high 74% snap share over both Malcolm Brown and Darrell Henderson, he did little to show for it.

The inefficiency didn’t even come from stacked boxes where according to NFL Next Gen Stats, Gurley faced an 8-man box only 4.55% of the time. Of the 16 total red zone rushing attempts this season for the Rams, Gurley has only seen six of them, converting only once. While Gurley will be in your starting lineup every week, the days of him being the top scorer constantly are gone.

All eyes were on the Browns and their high profile quarterback Baker Mayfield to lead them to the promised land in 2019. With the addition of Odell Beckham Jr, Mayfield was set to build off a successful rookie campaign. But things have not started out according to plan. Now 1-2 on the season, the Browns are not performing as they and fantasy owners expected.

Mayfield’s success has come on short routes and allowing his playmakers to use their athletic gifts to create big plays. However, he is showing a tendency of holding the ball and scrambling while waiting for his wide receivers to get open. These long or contested throws are stalling the Browns drives rather than only taking what the defense is giving them. If you have a better matchup available to you, feel free to start that quarterback over Mayfield until things improve. Yes, he can have a great game at any time – but until he does, you are missing out on possible points in your lineups.