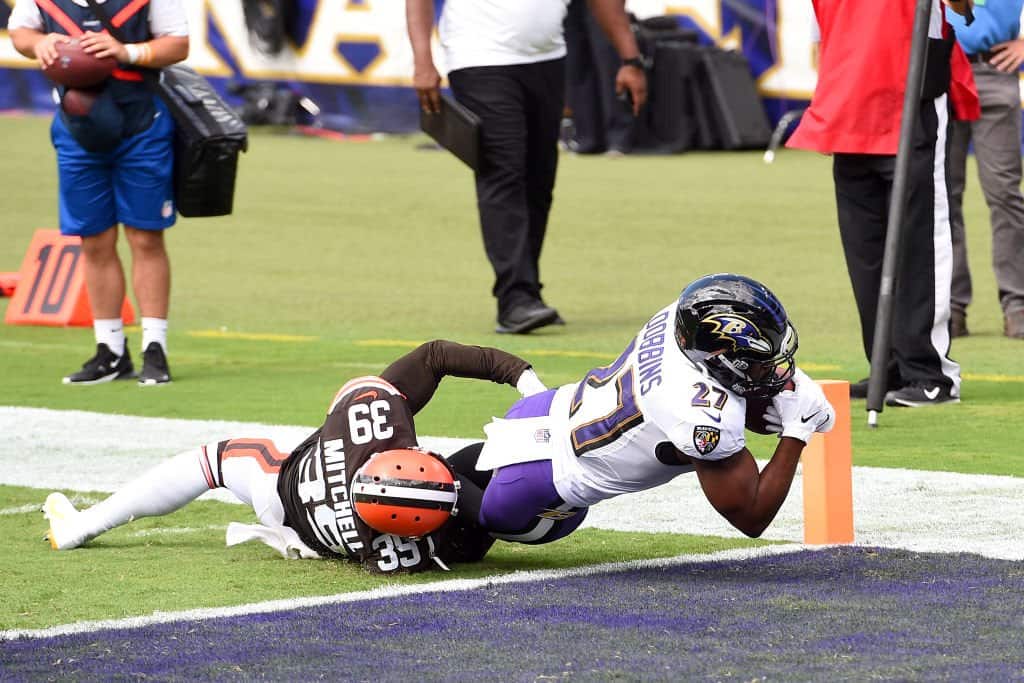 BALTIMORE, MARYLAND - SEPTEMBER 13: J.K. Dobbins #27 of the Baltimore Ravens dives for a touchdown against Terrance Mitchell #39 of the Cleveland Browns during the first half at M&T Bank Stadium on September 13, 2020 in Baltimore, Maryland. (Photo by Will Newton/Getty Images)

To some extent, the early part of the year is always a little bit of a ‘case of silly season’ when it comes to fantasy football. With such small sample sizes, everything looks significant with no real padding around to normalize each individual performance. That is where being a savvy fantasy football general manager comes in, because if you can identify trade targets, then you can capitalize on the hype or panic that can occur in Weeks 2 or 3. Attempting to identify those, and undervalued players, are exactly why we are here with our Week 2 article looking at which players you should be attempting to buy low on and who are those players to sell high on while the time is right.

Who are some fantasy football buy-low trade targets?

Attempting to buy low this early in the season is somewhat easier of these two missions to accomplish. People overreact to negative performances very quickly in the world of fantasy football, and if someone was already hesitant on a player, then a week can be more than enough time for them to cut bait. Let’s highlight four players who already had rocky value entering the season, and may have seen that value plummet further in Week 1.

Last week, I highlighted Ryan Fitzpatrick’s back up as a candidate to buy low on but entering Week 2, Fitzpatrick himself might be the player to buy low on. The 38-year-old veteran was stifled by the New England Patriots, throwing three interceptions and completing 20 of his 30 passes for 191 yards. However, it seems unlikely the Miami Dolphins are going to immediately give up on Fitzpatrick, and that provides opportunity.

Featured | Anita Mark’s Waiver Wire: Malcolm Brown at the top of my list

The Patriots defense was superb last year and there is no reason to think they won’t impress once again. Fitzpatrick was walking into a snake pit given the way he embarrassed them last year, and they made him pay. However, our Fantasy Points Differential (FPD) metric tells us that while Fitzpatrick’s fantasy output was poor, he had plenty of opportunities.

Throwing the ball 30 times, and adding five carries, saw Fitzpatrick register an expected fantasy points score of 16.8, which would have been enough to be a QB2 in Superflex leagues this week. Against lesser opponents, Fitzpatrick can still be a valuable short-term starter if you are desperate in Superflex leagues, and given his Week 1 showing and the potential he could be replaced during the year, he will not cost very much right now.

If you watched much of the game in Cincinnati this weekend, then I can only feel somewhat sorry for you. All around, it was an ugly showing, averaging just 3.63 yards per carry, but perhaps none more so than the pathetic fantasy return from Joe Mixon. However, while Mixon’s 6.1 fantasy points in PPR looks abysmal, his Fantasy Points Differential of -55% actually belies some optimism.

The Los Angeles Chargers have a very stout defensive unit and Mixon was always likely to struggle in that matchup. However, this week he faces a Cleveland Browns team with question marks both upfront and among their linebacking core. Now is the time to make a cheeky trade offer or two and see if you can catch a panicking owner.

We stick with the Week 2 Thursday Night Football game for our next fantasy trade target. It was not a pretty opening to 2020 for Odell Beckham Jr., as he pulled in three of his 10 targets for just 22 yards. However, while the 5.2 fantasy points in PPR look terrible, they do present an opportunity entering Week 2 to obtain Beckham in a buy-low scenario.

10 targets were the joint-eighth most targets seen by any receiver and calculated out to an expected fantasy points total of 17.36. If an owner is willing to sell a player seeing that kind of volume then it is time to buy on the talent that Beckham possesses

Let’s get the stat line out of the way early; one reception on five targets for zero yards. Yeah, that is not all that good. However, beyond those numbers, there is some positivity to be had around Christian Kirk. Five targets saw Kirk tie for the second-most on the team with Larry Fitzgerald and Chase Edmonds, placing him firmly in the position as the potential second weapon to DeAndre Hopkins.

Kirk is also a player that provides a big ceiling for fantasy owners. In Week 1, Kirk saw the 10th-highest depth of target in the league and collected over 35% of the team’s share of air yards. When you consider Hopkins had another 51%, it tells you Kirk saw the majority of the remaining air yards for the Cardinals. Kirk is going to have rough weeks, but the talent and opportunity are there for him to be a monster contributor if you are brave enough to take the gamble.

At this stage in the season, it can be hard to sell high. People are naturally suspicious of a single performance and generally, people do enough research to not get completely fleeced. Take Nelson Agholor for example. If you pointed to his fantasy output with a touchdown someone might be willing to talk until they realized he had just one target all game. Therefore the art of the sell high is to identify which players are active trade targets and are also at the apex of their value entering Week 2.

In what was generally a pretty terrible day for the Vikings, as they were manhandled by the Packers, Kirk Cousins had a solid outing that saw him post over 20 fantasy points. However, the circumstances led to a late flurry of points and meant that Cousin’s line actually flattered his opportunities throughout the game.

Cousins only threw the ball 25 times, as well as adding four carries, which equates to an expected fantasy point total of 15. That means that Cousins’ posted a Fantasy Points Differential of 61%, the fourth-highest of the week. One thing to bear in mind is that early in the season, FPD values for quarterbacks can be slightly depressed.

However, Cousins is not a quarterback that will usually be used in the gunslinger style. Therefore, this is the perfect performance for you to try and turn Cousins into a passer who is more talented but may have struggled in Week 1, or a similar level quarterback and a complimentary piece that can contribute to your fantasy team.

No qualifying player posted a higher Fantasy Points Differential than J.K. Dobbins in Week 1 (244%). With just seven touches, Dobbins was expected to score just 4.1 fantasy points instead of the 14.2 he managed. It was not as if Dobbins was even that impressive outside of the two touchdowns, averaging 3.14 yards per carry.

It’s worth noting that Dobbins saw 100% of the teams carries inside the five-yard line, which means this may be somewhat repeatable. However, any time a player scores 85% of his fantasy points on just two plays, I have concerns. Now is a great time to float Dobbins, the two-touchdown scorer, to your league and see what offers might come rolling in.

My final sell high is going to be a player who burnt many fantasy owners in a similar way in 2019. T.J. Hockenson burst onto the scene in Week 1 last year, only to somewhat vanish for the next six weeks. A strong first outing in 2020 has me having flashbacks and given Hockenson was essentially perfect on his five targets, it is unlikely his value gets higher.

With Kenny Golladay potentially due back in a week or two and Matthew Stafford happily hooking up with Marvin Jones and Danny Amendola, Hockenson could find himself the odd man out. Now is the perfect time to at least float the idea of a trade and see what comes from it at the very least.