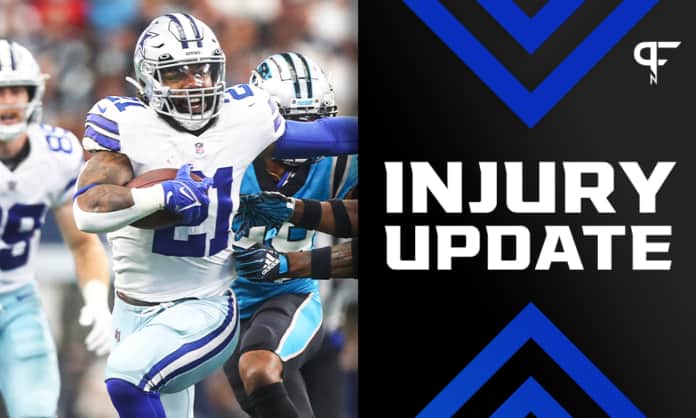 Ezekiel Elliott Injury Update: Should you start him or Tony Pollard on Sunday?

With Ezekiel Elliott missing practice with a knee injury, will he start in Week 5, or should fantasy managers pivot to Tony Pollard?

By Tommy Garrett
October 9, 2021
What's in this article? Click to show
Ezekiel Elliott misses practice due to “knee discomfort”
Elliott heads into Week 5 after a season-best outing vs. Carolina
Like it or not, Ezekiel Elliott is an upper-echelon fantasy RB
Tony Pollard would be a potential league winner should Elliott miss time
Should fantasy managers start Zeke with his current knee injury? Should Pollard be started as well?

After a disappointing start to the 2021 season, Dallas Cowboys RB Ezekiel Elliott has turned it around as the offense emphasized running the ball. Yet, injuries could slow down his momentum and lead to an increased role for Tony Pollard in Week 5. Should fantasy football managers be concerned over Elliott’s injury status with a looming matchup against the New York Giants on the horizon? If so, who is a better starting fantasy option this week between Zeke and Pollard?

Update: According to ESPN’s Adam Schefter, Ezekiel Elliott is expected to play in Week 5 despite his knee injury.

According to the Cowboys’ practice and injury reports, the sixth-year RB was absent from practice on Wednesday with what the team is calling “knee discomfort.” Although from the soundbites coming out of Frisco, Elliott’s health is actually on the way up.

“To be honest with you, I feel three times better than I did Monday,” Zeke said to the media later on Wednesday. Zeke picked up the knee “injury” in the team’s Week 4 game against the Seattle Seahawks. Elliott also expressed to reporters on-site that he expects to be in the field for practice on Thursday.

Based on this seemingly nonchalant nature towards his knee and the hopefulness of a quick return from a rest day, fantasy managers should not worry about Elliott’s status for Week 5 — which is a sign of relief as he comes off his best game of the season.

Elliott heads into Week 5 after a season-best outing vs. Carolina

Heading into Week 4, no one had been able to find success against the Panthers. Carolina had statistically been the best defense in the NFL. Through three games, the Panthers allowed just 88 yards on the ground to opposing running backs.

But with a renewed focus on the rushing game, the Cowboys fed Elliott to the tune of 20 carries for a season-high 143 yards. Elliott also found the end zone, finishing with 20.3 fantasy points as the RB11 on the week.

Elliott looked like his vintage self. He averaged 7.2 yards per carry, recorded 99 yards after contact, and showed his breakaway ability as he recorded 2 carries of 15+ yards, including a 47-yard rush in the third quarter.

Elliott has now posted solid outings in back-to-back games. After recording 130 total yards on 31 touches in the first two games, Elliott has been a focal point of the offense — recording 259 total yards and 3 touchdowns on 40 opportunities in the last two contests.

Like it or not, Ezekiel Elliott is an upper-echelon fantasy RB

I get that people are over Elliott to a certain extent and want to see Pollard take over. But so long as he is healthy, this is Elliott’s backfield.

Even with the team shying away from the run in the first two weeks, Elliott is averaging 17.8 opportunities per game, which is 10th-most in the NFL. He is fourth in the league with 342 rushing yards (5.3 yards per carry) and is tied for the top spot amongst RBs with 4 touchdowns.

I say this is impressive because the current average rush for an RB is 0.59 fantasy points per carry compared to 2.04 per reception (1.61 per target).

At some point, people need to start putting some respect on the RB powerhouse that is Memphis University. Just in recent years, they have pumped out Kenneth Gainwell, Antonio Gibson, Darrell Henderson, and Tony Pollard.

For as good as Elliott is, it says something that even his recent work has not been enough to quell those clamoring for Pollard to take over. Pollard posted 60+ yards for the third-straight game and is averaging 11.3 carries for 78.7 rushing yards, along with 12 receiving yards on 1.3 targets per game since Week 2. That’s enough to have the third-year back as the RB28 in PPR scoring.

There is no denying his explosiveness, and I believe that is why the people who back him do it so passionately. Pollard is a sparkplug. Through four games, he’s averaging 6.8 yards per carry (No. 1 with a minimum of 5 touches) and is outpacing Elliott in efficiency at 1.01 fantasy points per touch.

It’s par for the course, though, as Pollard has averaged 5.1 yards per carry and 7.2 yards per reception over his career. If given the lead role, we know Pollard can succeed. In the smallest of sample sizes (one game), Pollard posted 31.2 PPR points with 162 total yards and 2 touchdowns as the lead RB in Week 15 of 2020 when Elliott was out. All he needs is volume.

In games where Pollard has seen 10 or more opportunities (13), he averages 74 total yards per game with 6 total touchdowns. Pollard also generated 12.1 PPR points in those contests with four games (30.7%) over 20 PPR points.

Should fantasy managers start Zeke with his current knee injury? Should Pollard be started as well?

Quite simply, yes. Based on the information available, Elliott should be good to go for Sunday’s matchup against the Giants. Elliott rarely misses games. Just once has he missed more than one in his five-year career. Even then, it was a six-game suspension, not an injury-related absence.

The Giants currently rank 23rd in fantasy points allowed to RBs at 26.6 points per game. However, they also allow the third-most total yards per game to RBs at 171 while facing 30 RB touches per contest (6th).

Based on the matchup and both RBs usage in the offense, Elliott and Pollard can be started in Week 5. Elliott is a top-five play, where Pollard is an RB3/flex option in most fantasy football leagues. Where Elliott will see the volume, Pollard is a home-run hitter. Anyone with his talents that can see 10+ touches in a solid matchup should be in lineups.