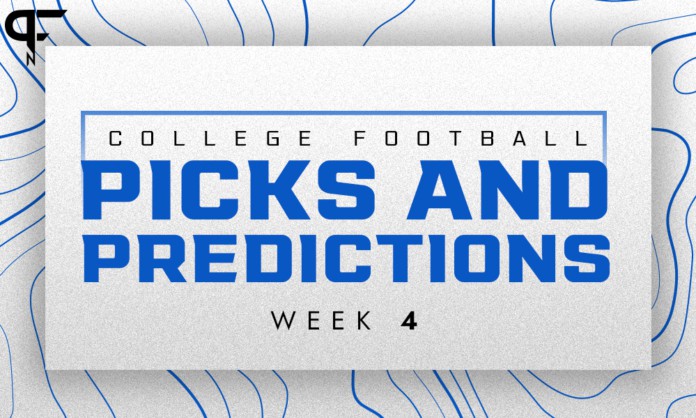 Early birds get the worms, and we've got the early Week 4 college football odds, picks, and predictions to help you win this week.

For the first time this season, we’re taking a stab at the early lines for the Week 4 slate of college football. We’ll update everything on our leaderboard overall after the Week 3 slate left us wanting more later. But for now, here are our first early Week 4 college football odds, picks, and predictions.

The early lines for Week 4 offer intrigue ahead of an anticipated weekend of action. Here are some of the notable Week 4 opening lines as of Monday [September 20] at 11:00 AM ET.

Let’s break down some of my favorite early lines.

Virginia is fresh off a stinging defeat to UNC, but Brennan Armstrong threw for over 500 yards. In fact, Armstrong has thrown for at least 300 in all three games this year and over 400 in the past two. While Virginia’s defense really struggled to stop anything North Carolina did, the Wake Forest offense is not built the same way.

The Demon Deacons defeated Florida State this past week, but it was hardly an offensive showcase. Unlike the scoreboard shows, Wake Forest was largely kept in check on offense, save for a few glimmering instances. Though they’ve been solid in coverage, they haven’t had to account for anything similar to what this UVA passing attack will present.

The Cavs can air it out among the best in the country at this rate. And ODU, Norfolk State, or FSU haven’t prepared Wake Forest for it. Virginia should score 40+, giving you the option to watch this line increase or take the over. Either should win.

This is a “home game” for Wisconsin, but savvy bettors will know to wipe away any home-field advantage for the Badgers. Played at Soldier Field in Chicago, both teams have less than a 2.5-hour trek to the stadium, with Notre Dame being a mere hour (ish) away. This one should see a lot of movement and money if our college football odds have anything to say about it.

The Fighting Irish have weathered their storm of a season to start and are finally playing some solid all-around football this past weekend against Purdue. Wisconsin had an off week to prepare, but clearly, they are a tale of two games this year. After struggling in Week 1 and dropping their game against Penn State despite outplaying the Nittany Lions, they dominated Eastern Michigan in Week 2.

However, they’ve proven to be susceptible to the deep pass, and Notre Dame QB Jack Coan has proven he can hit deep shots, something he didn’t during his three-year tenure with the Badgers.

Neutral site? Not so much. Revenge game? Very much. These two teams are much closer to each other than this opening line suggests. That should come down as the Irish winning outright.

Will the real Texas Longhorns please stand up? After being flat outclassed by Arkansas a week prior, the Longhorns played a great, full game of football against Rice this past Saturday. Now, was that a product of their opponent, or was this head coach Steve Sarkisian’s group finally putting things together?

That answer will be given on Saturday when the Red Raiders come to town. Matt Wells trots his team into Austin after a dominant performance to start the season. They are going to score some points, and their defense has been impressive to begin the year. Some new players are making names for themselves as Duke transfer DB Marquis Waters has found a nice role.

Texas Tech has the recipe to hang tough with the Longhorns and the defensive chops to slow down their passing attack. Stopping the long run from breaking will be pivotal, but Colin Schooler should be ready. This is more like a field-goal game plus home-field advantage, so give me Texas Tech +8.5 all day (Texas by 6).

At this point of the 2020 season, folks were talking about the potential ousting of Michigan head coach Jim Harbaugh. My, how far we’ve come since. The Wolverines are ascending into Big Ten stardom, which means this Thanksgiving’s “The Game” may have huge Big Ten and CFB implications riding on it once again.

However, Michigan must stop a resurgent Rutgers team coached by Greg Schiano along the way. Both Michigan and Rutgers have each allowed just 34 points this season through three games apiece. Stalwart defenses will stand up in what could be a classic Big Ten battle.

Still, as a firm believer in Schiano and what Rutgers can turn back into long-term, are we really ready to call the Scarlet Knights anything less than a 3-touchdown dog to Michigan? I, for one, am not. Expect the line to correct itself by kickoff. Get in while the getting’s good.

As an alum of Florida State, I couldn’t look myself in the mirror after saying FSU has a chance against Louisville on Saturday — not after the way they’ve been playing to start the season, and especially not after the way Louisville beat the better Florida team (UCF) this past Friday.

Louisville head coach Scott Satterfield must be an avid reader of our college football odds, picks, and predictions. He went as far as to abandon his most famous play call on Friday night against UCF after we called him out on it. Say what you will — it’s clear he knew something needed to change, and he changed it.

Now, fast forward to this matchup and the most recent string of success for the Cardinals. QB Malik Cunningham was running wild all over the second- and third-level defenders of UCF. It was eerily similar to Lamar Jackson dicing up FSU defenders like a warm knife sliding through butter.

If that continues, expect Louisville to pound FSU. And expect the Deion Sanders to Florida State rumors to continue to intensify.

Personal connection puts me out of this line between Brock Purdy and Eric Mateos. I mean, Iowa State and Baylor. This is just to make sure you’re reading through these NCAAF odds, picks, and predictions.

I will remain a firm believer in Brock Purdy, and I cannot wait to watch this matchup between the Cyclones and Bears. It should go without stating that this has Big 12 implications early on in the season as one team may have peaked, and the other is on the rise.

Specifically, watch the battle in the trenches as the Iowa State defensive front will have to contend with possibly the best offensive line in the country.

Close only counts in horseshoes and hand grenades. So throw out any notions that this Nebraska team is a good football team despite close losses to Illinois and Oklahoma. They shot themselves in the foot in both games and even struggled to move the ball against Buffalo.

For Michigan State, you don’t go into South Florida, trounce the Miami Hurricanes, and come back to East Lansing without some favorable betting lines. However, scrubbing home-field away, the Spartans are clearly a bigger favorite over this Nebraska team than a field goal.

Payton Thorne has been a revelation, but his wide receivers on the outside have proven unstoppable. Nebraska doesn’t have the playmaking chops at cornerback to hold up with Jalen Nailor or Jayden Reed, both of whom have 3 receiving touchdowns through three games.

Michigan State is out to prove themselves in the conference yet again. You can bet Mel Tucker’s defense will be ready to go for this one. Prepare for Cal Haladay and Xavier Henderson to spy QB Adrian Martinez and this line to go up in favor of the Spartans.

College football predictions, picks, and odds against the spread for Week 7

College Football Team of the Week: Frank Harris accounts for 7 TDs in Week 6