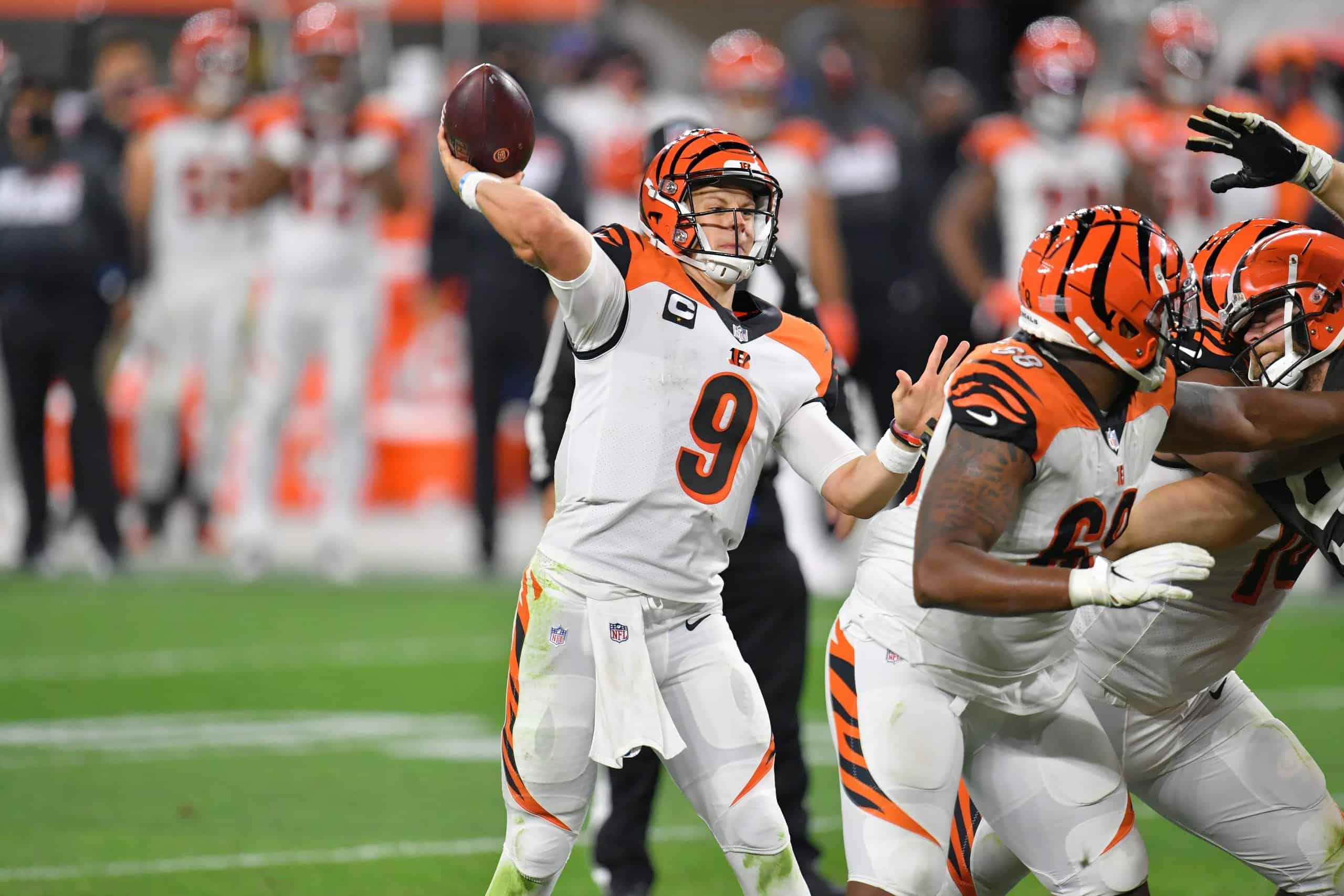 CLEVELAND, OHIO - SEPTEMBER 17: Quarterback Joe Burrow #9 of the Cincinnati Bengals passes during the second half against the Cleveland Browns at FirstEnergy Stadium on September 17, 2020 in Cleveland, Ohio. The Browns defeated the Bengals 35-30. (Photo by Jason Miller/Getty Images)
What's in this article? Click to show
What are the three keys to victory in Bengals v Eagles in Week 3?
1. Improvement within the offensive line
2. More big plays need to be dialed up
3. Finish strong

Someone has to get their first win of the season in this Bengals-Eagles Week 3 matchup. Both teams enter the game with some serious inconsistencies and problems to remedy on both sides of the ball, and this contest could likely end in a shootout given the circumstances surrounding the Eagles and the Bengals.

Here’s a look at three things the Bengals must do against the Eagles in Week 3 in order to get Joe Burrow the first win of his NFL career (which he’s more than earned at this point) and to avoid an 0-3 start to the season.

What are the three keys to victory in Bengals v Eagles in Week 3?

1. Improvement within the offensive line

2. More big plays need to be dialed up

It’s not just the offensive line not rising to the occasion for Burrow. The Bengals’ wide receivers group was highly touted ahead of the season, but we haven’t seen the type of performance we’d expect from them, with Tyler Boyd making more of a real impact than the likes of A.J. Green and John Ross. But really, who saw that one coming?

The Bengals have had just one passing play go for more than 20 yards, a 23-yard reception by a now-injured tight end C.J. Uzomah. There hasn’t been a Bengals wide receiver make a play on the ball for more than 18 yards, and Burrow is averaging just 5.2 yards per pass attempt heading into the game against the Eagles.

The Bengals could stand to be much more balanced on offense in general, considering that Burrow threw the ball a whopping 61 times last week. There’s no reason why that should be happening moving forward.

The Bengals need to snag the momentum early and stay steady throughout the matchup. They led for the majority of their season opener, crumbling in the fourth quarter. They stayed pretty close with the Browns in the second game but weren’t able to muster up a strong enough effort to get the victory in the end.

The Bengals haven’t lost a game by more than five points this year, and both games were winnable. There’s little reason the Bengals shouldn’t be 2-0 instead of 0-2, but there’s some tweaking to do to get to that point. The too little, too late business isn’t going to cut it moving forward.

In this article:A.J. Green, joe burrow