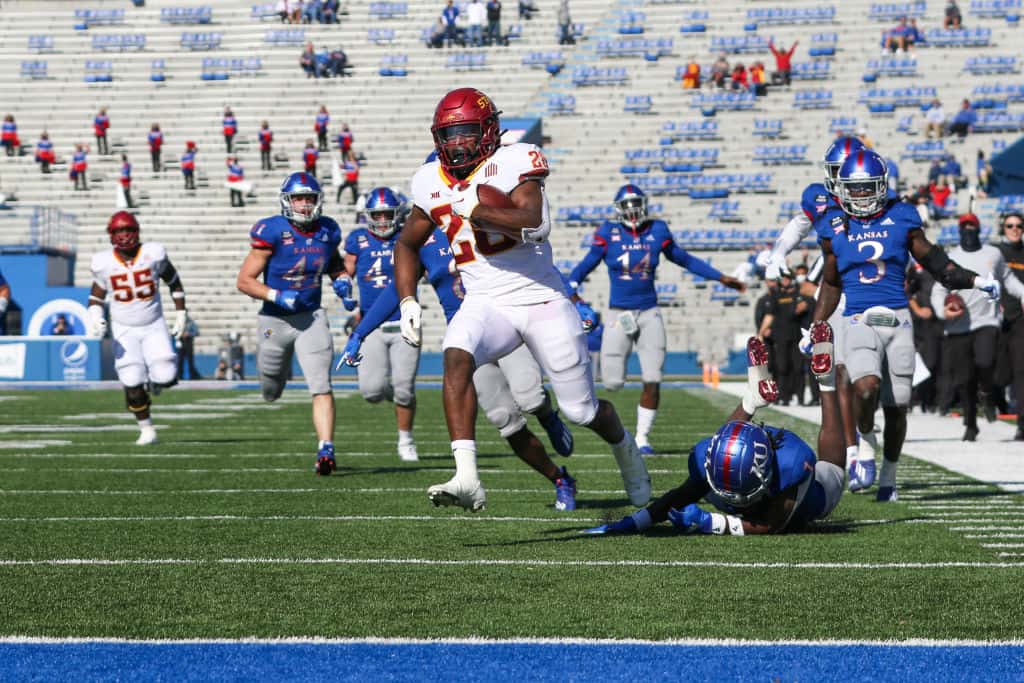 If you already find yourself enamored with the deep-dive of dynasty fantasy football, joining a Devy league is the natural progression for fantasy football fanatics. Player values fluctuate as the college football weeks fly by, making our Week 11 dynasty rankings and Devy rankings for 1QB and Superflex dynasty leagues the most comprehensive set of rankings to date.

What’s the difference between Devy and dynasty rankings?

I know some of you are asking, “What is Devy fantasy football?” and how does it differ from regular dynasty rankings? Devy is a niche dynasty fantasy football game that incorporates the drafting of current college football prospects before they officially enter their name into the NFL Draft. Current college football players and incoming freshmen are typically eligible to be drafted in Devy drafts, but each individual league is slightly different, meaning you could even stumble across some Devy rankings with top high-school prospects included.

As you can see on our dynasty rankings table, we offer both 1QB and Superflex Devy rankings for an easier understanding of each player’s value. While 1QB is the more traditional form of fantasy football, our devy rankings are also useful in the ever-growing Superflex format. With the ability to choose between starting a quarterback or a skill-position player, quarterbacks are often valued much higher in our Superflex rankings.

The biggest devy news sure to impact our dynasty rankings hailed from the Big Ten Conference after talented Penn State running back Journey Brown was forced to medically retire from the game of football. The gifted running back with NFL aspirations now sees his football career come to a screeching halt after being found to have hypertrophic cardiomyopathy.

According to the Mayo Clinic, hypertrophic cardiomyopathy “is a disease in which the heart muscle becomes abnormally thick. The thickened heart muscle can make it harder for the heart to pump blood.” With there even being a slight chance of serious injury or even worse on the football field, team doctors had no choice but to rule Brown medically ineligible.

Regarded by most as a top-five running back in the 2021 class, Brown’s retirement is a significant blow to many devy and dynasty rankings across the globe. More importantly, it’s a massive blow to Brown on a personal level. With Clemson wide receiver Justyn Ross iffy to play football again after suffering a “congenital fusion” in his spine, our 2021 dynasty rookie rankings are slowly losing some of its depth.

With the college football schedule shrinking by the day, Week 11 of the NCAA Football season sets up as one of the most lackluster slates in recent weeks. Before the season started, Week 11 was circled as a potential College Football Playoff play-in game, but #1 Alabama’s road contest at LSU leads a group of postponed games across the college football landscape. We will not see some of our biggest stars from our dynasty Superflex rankings in Week 11.

Even if LSU’s early-season play knocked them out of College Football Playoff contention long ago, there’s no question how much of a blow this particular postponement is to the college football world. The annual SEC West battle between the Alabama Crimson Tide and LSU Tigers is usually towards the top of every fan’s yearly watchlist.

In other news, three SEC games (#5 Texas A&M @ Tennessee, #12 Georgia @ Missouri, #24 Auburn @ Mississippi State) have also been postponed this weekend. Over in the Big Ten, #3 Ohio State’s road trip to red-hot Maryland has been downright canceled due to league policy. With this many teams not playing this week, our dynasty rankings will surely see a bigger update moving forward.

Games to watch this weekend

Enough about the games we aren’t getting this weekend; let’s dig in on what is left on the buffet. Week 11 of the college football season might feature zero Top-25 vs. Top-25 matchups, but that doesn’t mean the cupboard is completely bare. Even with a shortened schedule in Week 11, there will be plenty of scouting opportunities for players rising up our dynasty Superflex rankings.

Fresh off their double-overtime upset over then #1 Clemson, current #2 Notre Dame travels to Chestnut Hill to face an underrated Boston College team. The Eagles are led by transfer quarterback Phil Jurkovec, a transfer from Notre Dame, and rising Devy tight end Hunter Long. Boston College gave Clemson all they could handle over Halloween weekend, meaning the Eagles are unlikely to sneak up on the Fighting Irish.

In the SEC, Arkansas needs to ride the running back duo of Rakeem Boyd and Trelon Smith if they have any hope of an upset victory over #6 Florida. The Razorbacks will need the offense to keep up, as the Gators passing-game trio of quarterback Kyle Trask, tight end Kyle Pitts, and speedy wide receiver Kadarius Toney is among the toughest to stop in all of college football.

These Week 11 devy fantasy football and Superflex rankings for dynasty leagues were last updated on November 12th, 2020. Players with an * are currently OUT due to injury or player/conference opt-outs. Below, you can sort the rankings by format, position, team, and rank. If you need to search for players or teams, you can do so using our filters below. Don’t forget to reset them to clear your board and start from the beginning.