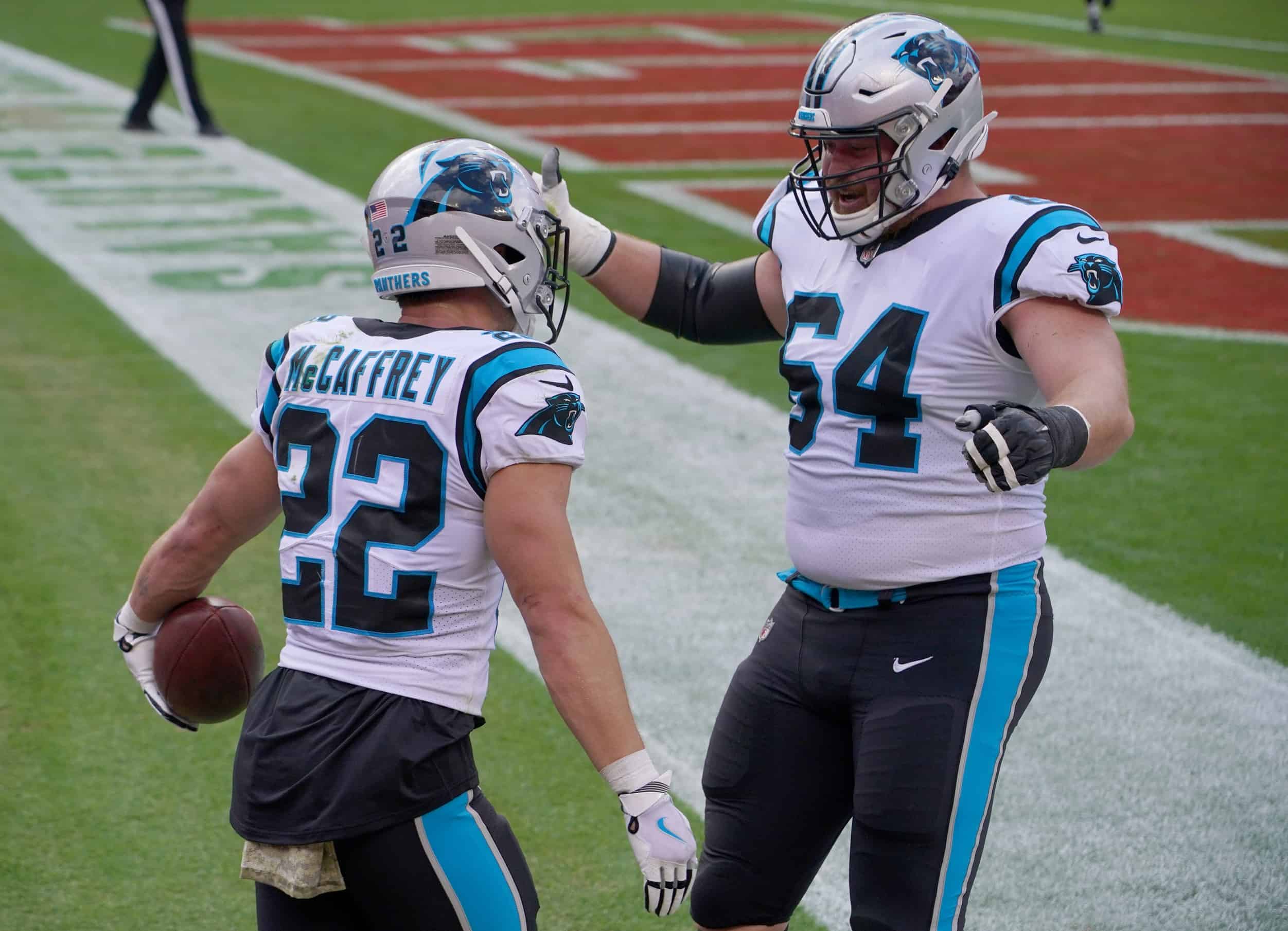 Now that the 2021 NFL Draft is behind us, dynasty fantasy football drafts are in full swing as more and more people jump in and try their hand at this year-round format. For those getting their feet wet for the first time, running as many mock drafts as possible is the best way to get accustomed to the new format and how values change versus redraft or even best-ball leagues. With the importance of nailing your first few rounds while building the foundation of your team, here is a quick 2021 Four Round Dynasty Fantasy Football Mock Draft to help give you a start on your pre-draft preparations.

The first thing when jumping into any draft is knowing the league settings. If this were a superflex league, then quarterbacks would be flying off the boards early. Here, were are running a traditional 1QB draft which most people are more familiar with if you have played fantasy football before. This tends to be the default settings on nearly all sites. For context, in a snake-style format, I am picking out of the No. 3 spot in this 2021 dynasty mock draft.

Despite missing the majority of the season, Christian McCaffrey is still the most valuable player in dynasty leagues. Seeing him go at the 1.01 is no surprise and will be the case for 97% of leagues. Even playing in just three games in 2020 due to injuries, McCaffrey managed to be the RB54 in PPR, which is staggering. Averaging 30.1 ppg, it was clear he is just as dominant as he was in 2019.

The gap to the RB2 (Aaron Jones) was 156.4 points. For context, this is the same gap Jones (RB2) had to Duke Johnson as the RB29. He also became just the third player ever (Roger Craig and Marshall Faulk) to have 1,000 yards rushing and receiving in the same season. Carolina’s offense is full of weapons, and there are zero reasons to believe McCaffrey will have a down year in 2021. For my money, he is the clear cut 1.01 in dynasty formats.

I feel the draft starts at the 1.02, and this 2021 dynasty fantasy football mock draft is no different. You will not find a bigger Jonathan Taylor fan than me, and as the second overall pick, I can understand the selection.

As a rookie, Taylor ended the season as the RB6 with 252.8 PPR points, averaging 16.9 per game. He led all rookies in both yards (1,169) and touchdowns (11) while adding 299 yards and a score through the air. But we also need to acknowledge the disparity between the first and second half of the season.

From Weeks 1 through 10, Taylor did not hit his stride even with Marlon Mack sidelined with a torn Achilles. During this stretch, he was the RB19, and many managers who spent a first overall pick in their rookie drafts on him were rightly frustrated.

Not only did Taylor turn it around and play with a better pace following Week 10, but we have to look at the schedule he faced. He played against the Texans twice (31st vs. RBs in fantasy points), Packers (28th), Raiders (29th), Jaguars (30th), and the Steelers (2nd), who were dealing with a plethora of injuries.

I still love Taylor’s long-term value, and in dynasty, this is the lens we need to use as the players you select will be on your roster for several years. At 22, he is one of the best pure rushers in the NFL and plays on one of the better offenses for RB production.

Has everyone forgotten about Saquon Barkley? This was my selection in this 2021 dynasty fantasy football mock draft, and selecting Barkley was an easy decision. Yes, he is coming off an ACL tear, but given the timing of this injury (Week 2), I am not worried about the start of his season in 2021.

The last healthy season for Barkley was 2019, where he totaled 1,441 scrimmage yards and 8 touchdowns as the RB10. Even for that season, I use the term healthy loosely. Barkley suffered a high ankle sprain in Week 3 and even admitted that he came back too early. At the time of his injury, Barkley had 227 rushing yards and a TD in just two games.

This is the same RB who lit the NFL on fire as a rookie with 1,307 rushing yards, 721 receiving yards, and 15 total touchdowns. When on the field, Barkley has unlimited potential, and he’s on a Giants’ offense loaded with talent. RBs are the core of any successful dynasty team. We will quickly hit a point where the talent falls off a cliff. I’ll gladly select my RB1 in this 2021 dynasty fantasy football mock draft.

The issue for Cook is he has yet to play an entire season, and now the NFL added a game to the schedule. In his four-year career, Cook has missed 21 of a possible 64 games. He is also coming off a season of 312 carries, which tends to lead to a production drop the following season, given the toll a body takes as an RB. It is hard to deny the upside of Cook for dynasty given his ceiling, but you cannot ignore the risk either.

Alvin Kamara is the last of the “elite” RBs on the board, but what will be in 2021 and beyond? The big elephant in the room is the absence of Drew Brees.

When Brees has been out of the lineup, the splits have been a drastic drop for Kamara’s production. In their 52 games together, Kamara averages 22.36 ppg with 16-game stats, at 173 rushes for 882 yards and 12 touchdowns with 90 receptions on 113 targets for 795 yards and 4 more touchdowns.

In eight games without Brees, Kamara plummets to 16.98 PPR points per game. Maybe not quite a plummet but a substantial drop for a top-five selection in dynasty drafts. While Kamara sees an uptick in rushes (220), there is an equally significant decrease in passing production (88 targets and 70 receptions). In 2020, Kamara averaged 27.4 ppg from Week 1 through 10 with Brees at the helm. With Taysom Hill in Weeks 11 through 14, 14.2.

We will not know who is under center for the Saints until the start of the season. If it is Hill over Jameis Winston, Kamara will see a drop in value. With that being said, it is hard to fault selecting a guy who has four top-10 fantasy finishes in five years with your first pick in a dynasty mock draft.

Who is the WR1 for dynasty fantasy football? That’s a very legitimate debate, and several receivers could stake claim to this ranking. After seeing Davante Adams tear up the NFL again, it’s hard not to look at him as the frontrunner. Finishing as the WR1 last season, Adams recorded a league-high 18 touchdowns along with 1,374 yards on 149 targets for 358.4 PPR points.

Of WRs who saw at least 75 targets, Adams was second with 2.42 PPR per target, and he also led the NFL in targets per game at 10.64. Additionally, he was third in receptions percentage at 77.18% and number one in red zone targets (28) despite playing in just 14 games.

If you were to guarantee me Aaron Rodgers was back in Green Bay for 2021 and beyond, Adams would remain my WR1. But that is becoming more difficult to believe, and it places Adams’ value in jeopardy. Talent-wise, he is without question worthy of this selection in 2021 dynasty mock drafts. Nevertheless, without a stable QB, he could end up in the WR7-10 range.

While Adams is dealing with QB questions, there are none for a very long time in Kansas City. Tyreek Hill remains the focal point for the Patrick Mahomes-led passing attack and is continuously one of the best receivers for dynasty managers to select early in mock drafts.

Hill was the WR2 in PPR formats last season with 328.9 points in 15 games played. He turned 135 targets into 87 receptions for 1,276 yards and 15 touchdowns. He was also one of the most consistent receivers last season.

Hill led all receivers with a 73.33% start percentage (WR24 or above performances). Given the recent news with Rodgers and the Packers, Hill has moved up to my No. 1 spot in my WR rankings in dynasty formats until we have more clarity.

What is the ceiling for DK Metcalf? A physical specimen, Metcalf took his game to a new level as a second-year pro. As the WR7 in 2020, Metcalf caught 83 of his 129 targets for 1,303 yards and 10 touchdowns. He opened the season up with five straight games of 90 or more yards with 9 touchdowns through Week 12.

Unfortunately, Metcalf disappointed towards the end of the season as he scored just 57.4 PPR points over the final five games — WR38 during this stretch. A stark contrast to the WR3 ranking he has coming into the critical end-of-season stretch for fantasy managers.

Metcalf has all the making to be the best receiver in football, even if he will never be a Gold Medalist sprinter. The Seahawks brought in Shane Waldron, the passing game coordinator for the Rams, to appease Russell Wilson, and hopefully, get Metcalf more touches in the end. Receivers extend your championship window in dynasty, and there are very few better options to target in 2021 dynasty mock drafts than Metcalf.

If you are interested in having A.J. Brown on your dynasty rosters, you need to make that happen before the 2021 season kicks off. He might be virtually untouchable after this season.

Some players have an innate ability to score touchdowns. With regression the narrative of his second year, Brown proved his rookie campaign was no fluke. Battling through a pair of injuries, Brown recorded 70 receptions on 106 targets for 1,075 yards and 11 touchdowns. The only thing that limited his production is his target total. That won’t be the case in 2021, however.

Between the losses of Corey Davis, Jonnu Smith, and Adam Humphries, the Titans are missing players that accounted for 47.9% of their targets, 48.3% of their red zone targets, and 56.6% of their air yards. There is no one else on this team to receive them. Brown could blow past the 120 target figure in 2021 and end up the WR1 on the season.

Nevertheless, if there was anyone ever built to withstand this kind of abuse, it’s Henry. But when are the wheels going to fall off? At some point, this herculean toll will catch up. He is one of the more polarizing players in 2021 dynasty mock drafts as there are just as many believers as there are detractors.