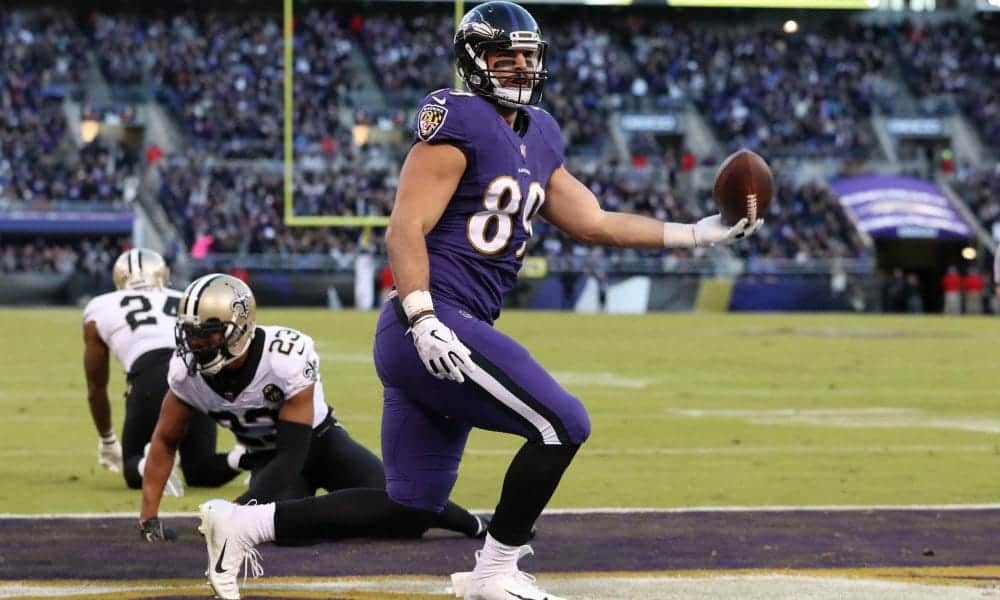 We’re ten weeks through the fantasy football season, and if you’re playing in a dynasty league, you have a rather good sense of your team for this season. In this stock watch, I’ll have players that have increased their dynasty fantasy football value through Week 10 of the season and can be acquired at varying price points, and for teams with different goals.

Every move you make at this point in the season should be affecting your start/sit decisions on Sunday morning. As a bonus, I have two intriguing players that have kept their value somewhat steady over this year. Still, due to circumstances around them, I could see it drop precipitously over the end of the season and into 2020.

You’ll have to break open the piggy bank for these players, but for whether you’re dealing for a championship or the future, they’ll help you get where you’re going

While Late round QB may be a statistically winning strategy in redraft leagues, there is a nice bit of comfort I feel knowing I don’t have to worry about the position in dynasty drafts. Coming off a performance that saw possibly the coolest spin move ever he would be at the top end of his price, and you’d likely need to come with an offer of a mid to early 2nd round pick to pry him from his current holder. Jackson posted the highest OSM grade of the year so far, topping his mark in the season debut. We all knew Jackson’s legs would be a problem for NFL defenders, but his arm and decision making is what is solely responsible for his grade. What’s even better is that this entire offense is young and will likely keep adding essential pieces over the next few seasons.

Staying in Baltimore, we found one of the best steals in rookie drafts a year ago. Many were puzzled when the Ravens doubled down on the TE position in the 2018 NFL Draft selecting Andrews in the third round after spending their first-round pick on Hayden Hurst. The gamble proved to be worth it now that Andrews is already at the top end of the TE position in just his second year in the league. His chemistry with Lamar Jackson was evident early on into their careers, and as it stands right now, Andrews is the best, most consistent receiving threat the Ravens have on their roster. Most trade value charts will find him fetching a late 2020 first-round selection at a minimum. He is well worth the investment as his place on a young team with an offensive coordinator that brought up Colin Kaepernick and Vernon Davis means the future for Andrews is increasingly bright.

You don’t need me to give you his resume. Julio Jones is one of the best receivers in the NFL and fantasy football. He remains a top buy for dynasty players that are competing for a championship as he will be in the twilight of his career before any other current WR1 except Julian Edelman. Most owners would likely ask for a first-round pick in 2020 and 2021, possibly with an additional player in the mix as well. Still, talents like Jones are rarely available, and he could shift the balance of your team for the next two seasons at an absolute minimum. Well worth the investment for those looking to top their league’s totem pole.

Lost in the shuffle of the Cleveland Browns offensive woes this season is the reality that Jarvis Landry is fantasy football’s #20 WR. One of the most frequently discussed players every offseason, Landry, will not provide top-10 value at any point in his career going forward, which you can use to your advantage. You can break out any trade value chart to see Landry sits around a mid to late first-round pick, and I can’t blame dynasty fantasy football players for not being willing to trade that much for him, especially considering the depth of talent from the 2020 class. For my taste, you’d be offering some form of a mid to late second-rounder with some youth that has upside appeal in the vain of Mecole Hardman.

Quietly fantasy football’s #35 reciever on the year, Devante Parker is about as unsexy as it can get when you’re talking about flex options. Still, with double-digit PPR points in each of his last six games, Parker could be useful to be the first option off the bench for teams looking to close things out down the stretch. The only real threat on Miami’s offense as it is, Parker will see plenty of volume no matter who is lining up under center. A matchup with Tre’ Davious White will almost positively impact his value negatively; dynasty fantasy football players could get a steal as he faces the Jets, Giants, and Bengals during the fantasy playoffs.

The future in Tampa Bay is Ronald Jones, but Peyton Barber won’t go away. After a fumble last week, Jones saw Barber receive double-digit carries for the fourth time this season, and he also converted a goalline carry in the 4th quarter to seal the victory for the Buccaneers. We all know how fragile the RB position can be, and if you are contending this season and need depth, Barber is one of the better options to contribute points this year for the cost of the late second-round pick you’re likely holding. Currently fantasy’s 45th RB, Barber won’t see an abundance of playing time unless Jones sustains an injury or develops a fumbling problem. Still, Barber’s workload is far less volatile week to week than other backs in his price range.

You might be parting with a real asset here, but your window to acquire as much as possible is short

I’m not at all saying that Zach Ertz’s level of play is going to fade down the stretch or even over the next couple of years. However, the growing emergence of Dallas Goedert means other dynasty owners will be cautious about paying top dollar in and after 2020. Still worth more than a mid to high first-round pick in 2020 and a mid-level player to be added, Ertz can contribute to a team looking to make a run over the next two seasons. Beyond that, we may see the torch being passed as Goedert came into the NFL with a level of polish to his game rarely seen in prospects. Playing time may not shift entirely for another season plus, but if Goedert continues to improve, it is going to happen sooner than later. You don’t want to be selling on the ascendence of another player, so why not do it now and invest in the quality young players entering the league in 2020?

A rather young name for the sell high list, Los Angeles Chargers WR, and former first-round pick Mike Williams still has an incredibly high NFL ceiling. Yet, I worry more about the likelihood of him ever reaching his fantasy ceiling. Not garnering a high target share in a complete offense with an aging QB and potentially two better pass catchers (depending on your opinion of Hunter Henry), I can’t talk myself into Williams finishing a season as a top 10 WR regardless of scoring format anytime soon. If you can flip Williams to a team that started its rebuild a couple of years back, you can land an early to mid-first and possible even a WR4 for depth’s sake.