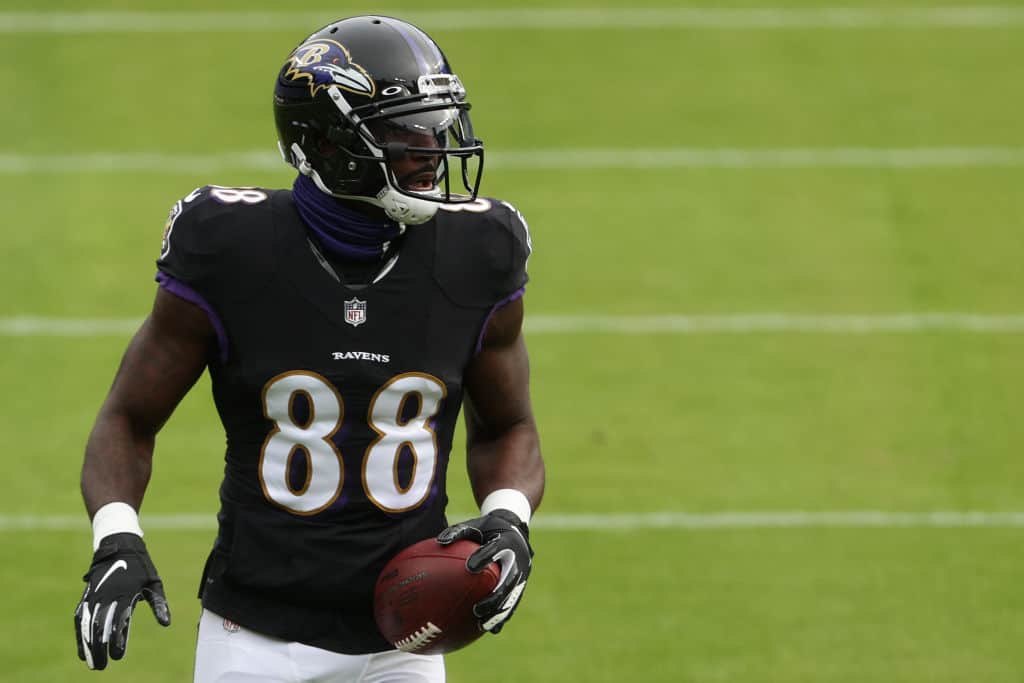 BALTIMORE, MARYLAND - NOVEMBER 22: Wide receiver Dez Bryant #88 of the Baltimore Ravens warms up before playing against the Tennessee Titans at M&T Bank Stadium on November 22, 2020 in Baltimore, Maryland. (Photo by Patrick Smith/Getty Images)
What's in this article? Click to show
Dez Bryant will be active for the third time this season
Can Robert Griffin III spark the Ravens’ offense?
What pass-catching weapons other than Dez Bryant could the Ravens offense deploy this week?
Want more analysis and news?

The Baltimore Ravens offense, led by quarterback Robert Griffin III, will look significantly different when they take the field against the Pittsburgh Steelers. What should we expect to see from the likes of RG3 and Dez Bryant, and can anyone on the Ravens offense offer fantasy football value?

Dez Bryant will be active for the third time this season

It looked as though Dez Bryant’s career was over after two years out of the game following his departure from Dallas after the 2017 season. However, the Ravens took a chance on the veteran receiver, adding him to their practice squad.

That decision paid off for the Ravens in Week 9, when they elevated Dez Bryant for the first time. In that game, Bryant played just two offensive snaps and did not see a single target.

The Ravens returned Dez Bryant to the practice squad following that game but elevated him again for their Week 11 contest. Against Tennessee, Bryant played 54% of the offensive snaps, seeing five targets in which he pulled in four receptions for 28 yards.

Ahead of this Week 12 game, the Ravens signed Bryant to the 53-man roster as they were elevating him for the third time this season, which is the maximum a team can elevate a single player.

What can we expect from Dez Bryant in Week 12?

While Dez Bryant was once a star receiver with the Cowboys, this is a very different player in a very different set of circumstances. With Lamar Jackson not playing, Robert Griffin III will be the starting quarterback for the Baltimore Ravens. Jackson and Bryant connected fine in Week 11, but a return of below six yards per target is hardly exceptional.

However, something we often see with backup quarterbacks in the NFL is that they connect better with players further down the roster when elevated to be the starting quarterback. That is often because their practice reps are delivering the ball to the players lower down the depth chart or on the practice squad.

While it is hard to know for sure, there is the potential that we see RG3 and Bryant able to find a connection if they have gotten to know each other’s tendencies in practice. While you should not count on it, Dez Bryant could be an exciting player to roll the dice on for fantasy football in Week 12.

It is going to be tough for Robert Griffin III to achieve much in this game. Not only is Lamar Jackson absent, but the Ravens offense is also without Mark Andrews, Willie Snead, JK Dobbins, and Mark Ingram as offensive playmakers this week. Additionally, the offensive line, which had already lost left tackle Ronnie Stanley to injury, will be without other pieces this week.

Offensive coordinator Greg Roman is going to have to get creative in this Week 12 matchup with the Pittsburgh Steelers. Griffin had made just one other start for the Ravens in the three seasons he has been on the roster, back in Week 17 against the Steelers when Lamar Jackson was rested for the final game of the 2019 regular season. In that matchup, Griffin managed just 96 passing yards at 4.57 yards per attempt from 11 completions on 21 attempts.

What support will RG3 have from the offense around him?

Griffin will have to lean heavily on the likes of Dez Bryant, Gus Edwards, and Justice Hill this week against the Steelers. With Ingram and Dobbins both ruled out, Edwards is expected to get the start, and running the ball is likely the way the Ravens choose to try and move the ball on the Steelers in this matchup.

Edwards has had some success this season, with 376 rushing yards at 4.4 yards per attempt on 85 carries, scoring three touchdowns in the process. He has added another 42 yards on three receptions from seven targets. The issue for Edwards this season has been the timeshare he has had to cope with, as both Dobbins and Ingrams have seen frequent carries.

In Week 12, Justice Hill will be the primary backup, and it will be interesting to see how much he is involved in the offense. The second-year RB out of Oklahoma State has been active in six games this season.

However, he has yet to register a carry, with his only offensive contribution coming on a single reception that he took for three years. Hill has largely been used on special teams this year, as just 17 of his snaps have been on offense. Hill has only gone over 50 combined yards once in his brief career, although his best rushing performance came in Week 17 of the 2020 season, with RG3 under center.

What pass-catching weapons other than Dez Bryant could the Ravens offense deploy this week?

Dez Bryant will likely draw much of the media attention because of his reputation in the league, but who else can Robert Griffin rely on this week?

Related | Is there an NFL game tonight? TV channel, start time for postponed Steelers vs. Ravens

Marquise Brown is still the number one receiver on this team, but he has struggled to make an impact in his second season. Through 10 games, Brown has 59 targets and 32 receptions. He has turned those into 431 yards and two touchdowns. On a per reception basis, Brown is outperforming his rookie season, but his catch percentage has dropped significantly to 54.2 in 2020. Brown has not broken 50 yards receiving in the last four games and has just six receptions in those last four games combined.

Outside of Marquise Brown and Dez Bryant, the options are somewhat limited for RG3 and the Ravens offense

The other receivers that RG3 has to throw to on the Ravens offense outside of Dez Bryant are Miles Boykin, Devin Duvernay, and James Proche III.

Duvernay has sparkled in moments, both offensively and on special teams. However, his role appears to be more as a gadget type player than an out and out receiver. Look for him to potentially see some handoffs tonight if the Ravens try to mix things up without the rushing game of Lamar Jackson on the field.

Miles Boykin was a name that was primed to be a potential breakout player in 2020, but he has just 153 receiving yards on 14 receptions and 23 targets so far in 2020. James Proche has also played a very limited role in the offense, but he was also viewed as a potential heir to Snead’s role in this Ravens offense. With Snead absent, Proche could be set to step up.

The Ravens are without a recognized tight end on their offense

The absence of Mark Andrews and the injury to Nick Boyle may leave the Ravens and their offensive coordinator Greg Roman wishing they had not treaded Hayden Hurst.

The Ravens do have three tight ends on their practice squad, and if Robert Griffin III has built a rapport with them, we could see at least one activated today. If not, the Ravens may have to try and get creative, using bigger-bodied players like Dez Bryant close to the line in order to create confusion as to the identity of their offensive plays.

Look for the Ravens to try and use misdirection and mix up formations to get the Pittsburgh Steelers leaning in the wrong direction defensively. With limited resources available, RG3, Dez Bryant, and the rest of the Ravens offense are certainly going to need to exploit every small advantage they have in Week 12.