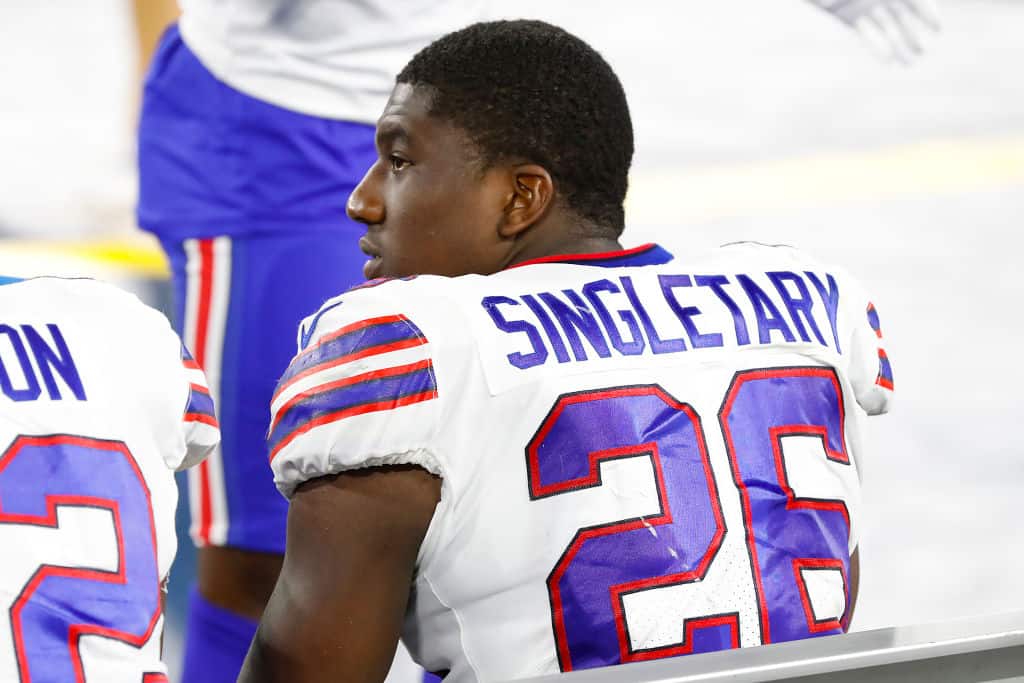 NASHVILLE, TENNESSEE - OCTOBER 13: Devin Singletary #26 of the Buffalo Bills watches from the sideline during a game against the Tennessee Titans at Nissan Stadium on October 13, 2020 in Nashville, Tennessee. (Photo by Frederick Breedon/Getty Images)
What's in this article? Click to show
Devin Singletary has performed below fantasy football expectations in 2020
The rushing game is no longer the focal point of the Bills offense
Fantasy managers should consider trading Devin Singletary before their trade deadline
Want more fantasy football analysis and news?

Add this to the list of topics I didn’t think I would be covering in 2020, but after disappointing nearly every week, here we are. Is it time to sell your Devin Singletary shares in fantasy? Going from a 5.1 yards per rush average in 2019 and on one of the most run-focused teams, it seemed that Singletary was going to be a lock to continue his pace this year. However, that has not been the case. From an offensive shift to a lack of production, Singletary makes himself someone that fantasy football managers need to make a tough call on and do it quickly as the fantasy trade deadline is fast approaching.

Devin Singletary has performed below fantasy football expectations in 2020

“All he has to do is stay healthy and not fumble, and he could be a top 16 running back!” I heard this all offseason when talking about Devin Singletary’s fantasy prospects for 2020 and how he was a draft day steal. And in complete fairness, he has done both of those things, but it certainly didn’t translate to fantasy success.

Singletary has rushed the ball 79 times for 299 yards (3.8 avg) for one touchdown and has caught 20 of his 29 targets for 153 yards (7.65 avg) for a current ranking of RB28 in PPR scoring formats. Every stat I just mentioned is less than what he was doing last year. Yards per rush, yards per catch, touchdown percentage, fantasy points per touch, target share…you name it, he has regressed.

Week 7 was the third consecutive game where Singletary failed to score seven points in fantasy. It was also the third game in a row where he has less than 32 rushing yards or 50 total yards in a game.

The problem hasn’t been Moss that has held back Devin Singleraty in fantasy; it’s Josh Allen and a total shift in the Bills’ offense.

Led by Josh Allens’ incredible development as a quarterback and the addition of Stefon Diggs in the offseason, the Bills currently have the fourth-most passing yards (1958) and touchdowns (16). They have also nearly doubled their first downs through the air (65%) compared to on the ground (35%).

The philosophical shift on the offense has definitely hampered Devin Singletary and even Moss in 2020. However, it is not for lack of trying at the same time. Singletary has seen double-digit rushing attempts in five of his seven-game but has eclipsed 13 carries only once.

These are numbers we usually see out of a committee approach, which the Bills use, not ones of a bellcow running back that people claimed Singletary could be.

Suppose he is not going to be involved in the passing game. In that case, Singletary loses the majority of his fantasy value as there is not enough rushing upside alone that can make him worth trusting as anything more than a flex player.

So if you have Devin Singletary on your fantasy team, what do you do with him as the trade deadline approaches?

I have firmly pushed the panic button and am trying to bail on my Singletary fantasy shares.

Making things worse, Singletary has little touchdown upside. He has only scored once on the year, and it happened while Moss was out. That doesn’t appear fluky, as Singletary is consistently losing out on red-zone touches. His 11 red-zone carries are tops on the team, but Josh Allen has ten, and Moss has already seen seven despite playing three fewer games. And when they get inside the 5-yard line, Allen’s four carries are the team-high.

Devin Singletary is currently rostered in 98% of leagues, as there are people who still view him as a lower-end RB2. I am not one of those people, and I think the lack of upside along with the change in offensive thinking has him in the flex territory for me. If I have him on a team, I am trying to send him off to someone else to help the depth I have on the team, as his name alone can bring a decent return.

Zack Moss, rostered in just 49% of leagues, might be the better value on the team even if they all cap each other’s ceilings. Both players carry roughly the same value in fantasy but one could bring more to your team if you need a boost right now via a trade.