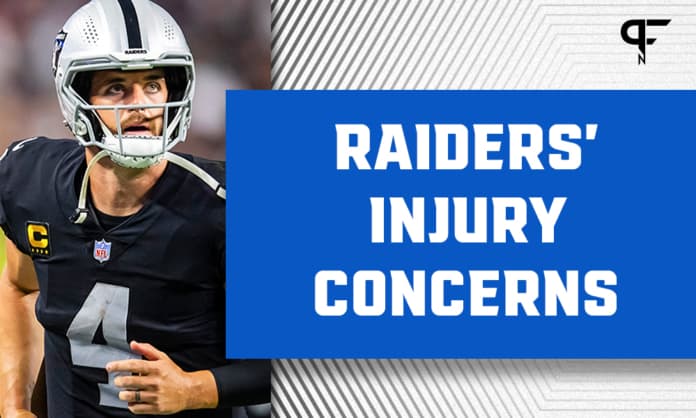 Derek Carr's injury may keep him out of Sunday's contest against Miami. With a questionable tag, Nathan Peterman could be QB1 in Las Vegas.

Get ready for … Nathan Peterman vs. Jacoby Brissett? That not-exactly-primetime showdown is not out of the realm of possibility after the starting quarterbacks for both the Las Vegas Raiders and Miami Dolphins — Derek Carr and Tua Tagovailoa — suffered injuries during their Week 1 game.

After an ugly Week 2 injury, we knew that Tagovailoa was very iffy for Sunday’s trip to Las Vegas. But we didn’t know that Carr is no sure bet to play, either.

Raiders coach Jon Gruden announced Monday that Carr underwent an MRI on his banged-up ankle. While the results were encouraging, Carr is “questionable” to play against the Dolphins. Carr didn’t miss a snap Sunday, and Gruden added that he believes his starting quarterback will ultimately be available this coming weekend.

That’s far more optimistic than Brian Flores is in Miami after Tagovailoa got rocked in the ribs by Bills edge rusher A.J. Epenesa Sunday afternoon. Tagovailoa could hardly make it off the field, and the team transported him by cart to the locker room. Tagovailoa did not return, and Flores listed him as day-to-day for Week 3’s game against the Raiders.

“He’s a tough kid,” Flores said of Tua. “I would say he’s a very tough kid. Whether it’s the just coming back from the hip. I think he had a thumb last year that he played through. He tried to go yesterday. Toughness isn’t something that we question with him. He’s going to do everything he can to get back as soon as he can. I have a lot of confidence in that. No, he’s a tough kid for sure.”

Meanwhile, it appears that running back Josh Jacobs’ ankle and toe injuries will be at least a two-week ordeal. Gruden classified Jacobs as “very questionable” to play against the Dolphins a day after Jacobs couldn’t go against the Steelers.

Jacobs’ injury presented an opportunity for Peyton Barber, who received 13 carries for a measly 32 yards against the Steelers. Still, that was more efficient than Kenyan Drake, who had 9 yards on 7 attempts. But he did add 46 receiving yards on 5 catches.

Back to the quarterback talk — if Tua can’t go, Brissett will start. And if Carr is unavailable, get ready for the return of Peterman, who hasn’t started a game in nearly three years.

Marcus Mariota entered the season as Carr’s backup, but he’s on injured reserve with a quad injury. Now that Carr is a bit gimpy, the Raiders have to at least consider giving practice reps to Peterman, who is best known for his zero-touchdown, 5-interception game for the Bills in 2017. In his career, Peterman has a touchdown-to-interception ratio of 1:4 and a 34.0 passer rating.

Through two games this season, Carr has completed 66.7% of his passes with 4 touchdowns and 1 interception.

Brissett, meanwhile, has started 32 games for the Patriots and Colts since entering the league in 2016, generating an 83.2 career passer rating. And while he’s technically No. 2 on the Dolphins’ depth chart, he views himself as second to none.

“I don’t refer to myself as the backup quarterback,” Brissett said post-game Sunday. “I’m a starter.”