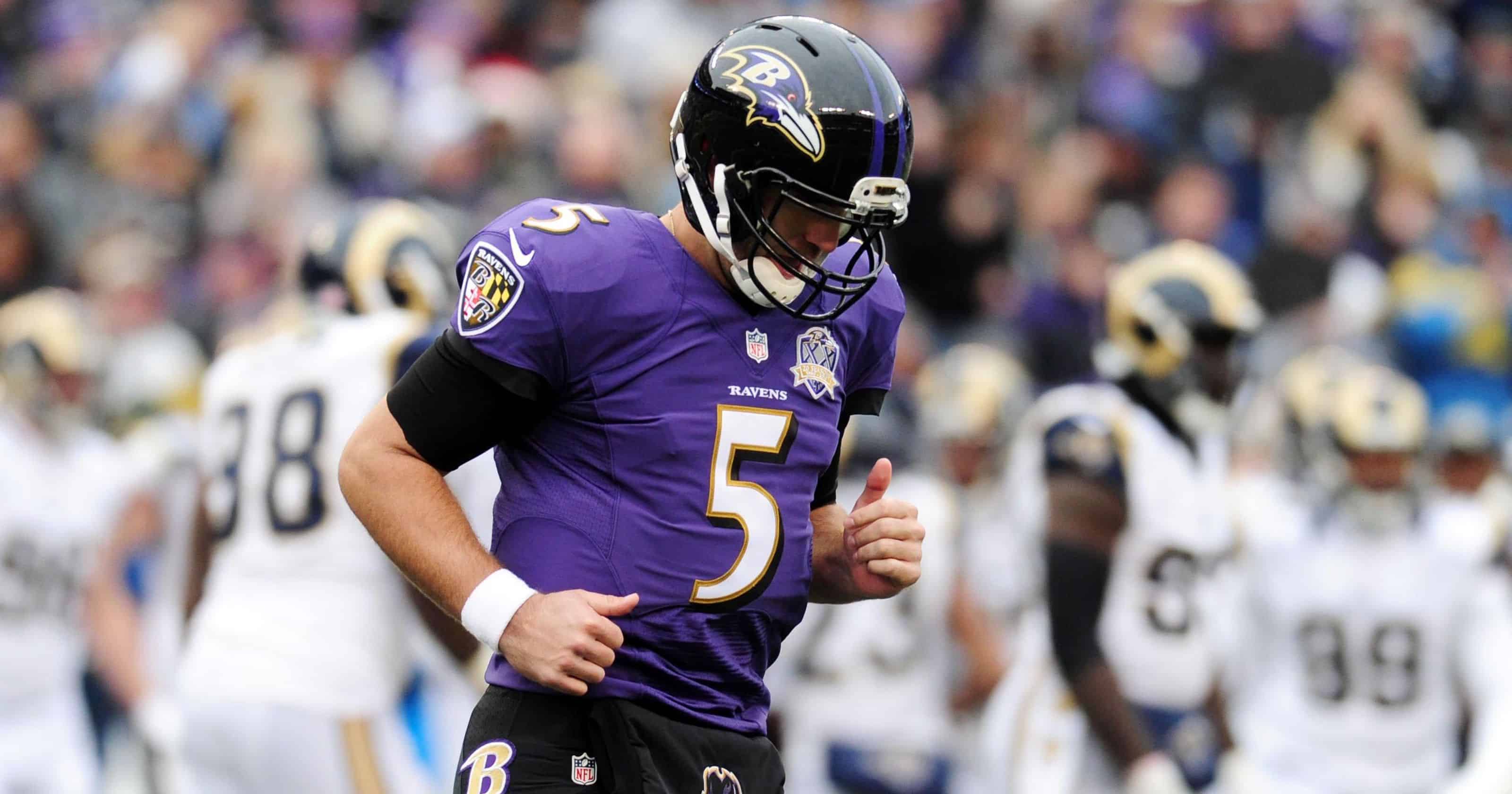 Photo Credit: USA Today
What's in this article? Click to show
The Denver Broncos recently traded for former Baltimore Ravens starting quarterback Joe Flacco. I think most people assume that Flacco is merely a temporary solution at the position.
Comparing Flacco to similar quarterbacks
Flacco’s decline as a quarterback
What should the Broncos do?

The Denver Broncos recently traded for former Baltimore Ravens starting quarterback Joe Flacco. I think most people assume that Flacco is merely a temporary solution at the position.

In fact, many have suggested that the Denver Broncos will look to draft a quarterback in the first round this year. However, someone should probably tell Joe Flacco that this is the plan. In a recent interview, Flacco said the following:

I don’t blame Flacco for saying this. He is a two-time Super Bowl winner, and expects to be treated as such. But problems begin to arise if Denver’s coaching staff agrees with Flacco. Because Flacco, over the last few years, has been nothing more than a mediocre quarterback.

In many ways, Flacco is very much like the Miami Dolphins new quarterback Ryan Fitzpatrick: an aging, mid to low tier player signed in order to provide a stopgap until the team drafts a new one. However, Flacco is much more deceiving than Fitzpatrick is. After all, he has two Super Bowl rings and a Super Bowl MVP award. And he is much more consistent than the mercurial Fitzpatrick. Unfortunately, “consistent” does not always equal “good”. And Flacco has definitely not been good over the last several years.

For comparison’s sake, consider how Flacco stacks up against the most recent Broncos starting quarterback: Case Keenum. Comparing the two players directly is challenging because Flacco did not play the entire season. However, both quarterbacks had down years in 2018. Their lack of success resulted in their respective teams deciding to move on from them during the offseason.

However, the primary difference between Flacco and Keenum is how long ago each of them had an above-average season. In 2017, just two seasons ago, Keenum had a career year, throwing 22 touchdowns and only seven interceptions. The last time Flacco had comparable numbers was five years ago in 2014, which also happens to be last time the Ravens made the playoffs with him as their starting quarterback. Keenum still has a chance to bounce back with the Washington Redskins. Maybe 2018 was just an off year for him. But Flacco has been struggling for long enough that to expect him to suddenly revert to an elite level of play is unreasonable.

Flacco’s decline as a quarterback

Flacco’s OSM grades over the last several years reflect his decline. In 2018, 2017, and 2016, Flacco received grades of 21.8, 16.9, and 22.9, respectively. His 2018 grade was 29th in the NFL, and if the 2017 and 2016 grades were directly compared to other 2018 quarterbacks, they would have been ranked as third worst, and 21st in the league. These are obviously not elite ratings, and they help to show that if Flacco ever was an elite quarterback, it has been several years since he played at that level.

The last time Flacco had an above average season was in 2014, arguably, the best year of his career. He threw for almost 4,000 yards, 27 touchdowns, and 12 interceptions. And these are good numbers, but they do not put him at the same level as the NFL’s best quarterbacks. Tom Brady, for example, has put up better numbers than that multiple times throughout his career, as have Ben Roethlisberger, Russell Wilson, and Aaron Rodgers, to name just a few. Even younger players like Patrick Mahomes and Jared Goff have already had seasons where they played better than Flacco did at his absolute best.

Simply put, Flacco’s numbers have never really been all that impressive. Even during his best seasons, he has never thrown more than 30 touchdowns and has never thrown fewer than ten interceptions in a season where he played more than nine games. Now, this is not to say that Flacco has never played well. Particularly during the Ravens Super Bowl runs, Flacco showed that he had the capacity to play like an elite quarterback. But those moments of high-level play were few and far between. And in recent years, they have been happening less and less.

What should the Broncos do?

So, what is the point of all this? I didn’t write this article to bash Flacco or the decision that the Broncos made in trading for him. In fact, I think that Flacco is an excellent choice for a stopgap quarterback, especially considering the fact that Denver can cut him at any time without incurring any dead money. What I am attempting to show is that, no matter what he might say, Flacco cannot be the long-term solution at quarterback for the Broncos. They need to draft his replacement soon, because if they don’t, they will end up trapped in the same level of mediocrity that the Ravens have been for several seasons.

Fortunately, the Broncos appear to be aware of this problem. One of the more prominent draft-related rumors this offseason has been that the Broncos are very interested in Missouri’s Drew Lock. If this rumor is true, and he is available at pick number ten, Denver should absolutely draft him. If the rumors are false, and the Broncos instead want to wait until next year’s quarterback-rich draft class, then that seems perfectly reasonable as well. But they should avoid waiting too much longer than that. Because if Flacco lasts more than a few seasons as the starter in Denver, then it likely means that things have gone very, very wrong.