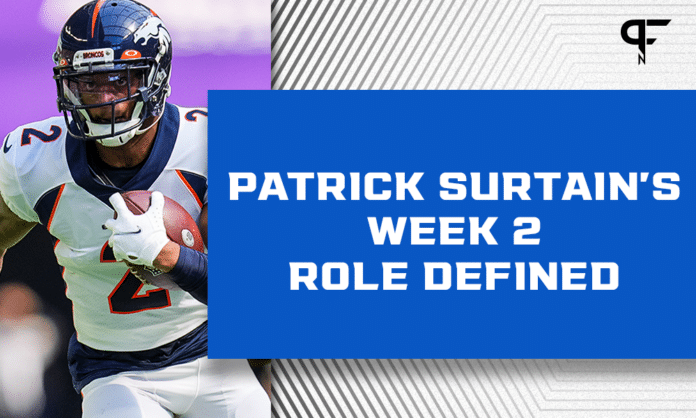 While the Broncos' defense hopes to have Bradley Chubb back for Week 2, Patrick Surtain's role in the secondary looks to be more defined.

By Adam H. Beasley
September 15, 2021
What's in this article? Click to show
Broncos defense hopes to have Bradley Chubb back for Week 2
Patrick Surtain could break out against the Jaguars
KJ Hamler should see added work in Jeudy’s absence

Denver Broncos head coach Vic Fangio was noncommittal Wednesday about Bradley Chubb’s availability for Sunday’s game against the Jacksonville Jaguars. On Wednesday, Chubb practiced on a limited basis, with Fangio saying the pass rusher will “give it a go.” Meanwhile, Patrick Surtain’s role in the Broncos’ defense and where he stands in their talented secondary appears more defined — particularly with CB Ronald Darby out.

Broncos defense hopes to have Bradley Chubb back for Week 2

In regards to Chubb’s status for Sunday, Broncos fans, without question, would prefer more certainty. But any positive injury news is a welcome improvement for a Broncos roster that lost two of its best players — Jerry Jeudy (ankle) and Ronald Darby (hamstring) — to the injured reserve this week.

Both will miss a minimum of three games, while Jeudy could miss up to six.

Chubb has been dealing with issues to both ankles, including one that needed surgery. He was not healthy enough to play in Denver’s Week 1 win against the New York Giants. And still, Fangio’s defense limited New York to 314 total yards, including 60 on the ground. Additionally, Von Miller sacked Daniel Jones twice in his first game action since 2019.

Miller missed all of 2020 with a freak ankle injury, meaning the tandem of Chubb and Miller have not appeared together on the field since September of 2019. Does that streak end Sunday?

Patrick Surtain could break out against the Jaguars

Even when high-end talent goes down on the Broncos’ loaded defense, qualified replacements step up.

For example, with Darby out, rookie cornerback Patrick Surtain II is in line for a showcase game against the terrible Jaguars offense. Surtain will start on the boundary and stay there throughout the game, Fangio said.

Darby’s injury was a bit of a mystery. He played all 61 snaps, and Fangio didn’t even know about it when he spoke with reporters two days ago.

“He has kind of had some tightness of late, so I’m not exactly sure when it happened,” Fangio said. “… The MRI showed a little bit of a tear that he needs to miss some time.”

In a testament to the depth and talent of the Broncos’ secondary, Surtain (the ninth overall pick in the 2021 NFL Draft) was a spot player in his NFL debut, logging only 16 of a possible 61 defensive snaps.

Surtain, whose first game action came largely at the dime defensive back spot, was targeted just once. Yet, that target went for a 37-yard touchdown by Sterling Shepard.

On Sunday, he’ll face a familiar adversary: Lawrence, whom Surtain first faced in the 2018 National Championship Game — both started as freshmen.

“He’s the same,” Surtain said. “Same fundamentals. Same poise. I think they have a very young team out there, a very talented team.”

The drop-off from Jeudy to the next available receiver will probably be more severe than it will be from Darby to Surtain.

Expect to see more from KJ Hamler, a second-round pick from 2020 who had 30 catches for 381 yards as a rookie. Hamler wouldn’t lack for constructive input, however. A few weeks back, veteran quarterback Teddy Bridgewater asked the team to move his locker next to Hamler’s in a poignant display of leadership.

“He just wanted to take a young dude under his wing,” Hamler said. “I’m going to listen to the guy who’s been in the league that long.”