After paying $4.65 billion to purchase the Denver Broncos, is Rob Walton regretting his decisions to hire Nathaniel Hackett and acquire Russell Wilson?

Rob Walton does not make many bad business decisions. In the strictest sense of the word, the owner of the Walmart empire probably didn’t make a bad business decision purchasing the Denver Broncos in June for $4.65 billion dollars, in concert with other owners. But after seeing the product his team put on the field, he has to wonder if he’s in the right business.

A Bevy of Mistakes May Haunt Broncos

The Denver Broncos boondoggle began by sweeping out the old front office and coaching staff, replacing it with former Vikings assistant general manager George Paton and former Packers offensive coordinator Nathaniel Hackett. The Hackett hiring decision was made in part with the understanding that they could compete for Aaron Rodgers’ services in the offseason.

But instead of getting the McVay-inspired Matt Lafleur offense and the scrambling deep threat Hall of Famer Aaron Rodgers, the Waltons had to settle for the generic store brand versions of both.

As such, Hackett might join Urban Meyer in being one of the rare first-year head coaches to be let go partway through the season. The odds of that happening are somewhat favorable, with bookies giving him about a 13 percent chance to be the first head coach fired this season.

Being in the same company as Meyer is extraordinarily bad news. While Meyer certainly put a bad product on the field, the motivation behind letting Meyer go had more to do with the series of scandals he had entered since becoming part of the Jaguars organization in 2021 – including hiring a strength coach last let go because of allegations of racism, violating offseason practice rules, forgoing traveling with the team after a loss, apparently cheating on his wife while forgoing traveling with the team, allegedly abusing players in his position of authority, and allegedly threatening players with bodily harm.

By contrast, Hackett appears to just be a bad football coach.

Indeed, former teammate Richard Sherman was on set for Thursday Night Football during and after the game and could not help but twist the knife when it came to criticizing Wilson.

The good news for Walton is that he’s not on the hook for all $245 million of Wilson’s contract. He’s only obligated to pay out $124 million of it – a fact that surely must come as some relief to the new owners of the NFL’s highest-elevation team.

Should the Broncos decide to move on from Russell Wilson before the 2023 season, they would end up with a cap charge of $107 million, an impossible amount that couldn’t be overcome with one offseason of shed contracts. Instead, they are likely committed to Wilson through the 2025 season, with something resembling cap relief appearing ahead of 2026.

MORE: The Denver Broncos Offense Has a Russell Wilson Problem

Though Wilson’s contract is not guaranteed for 2025, the structure forces the Broncos to commit to his 2025 season if he’s on the roster in 2024 – and cutting him in 2024 would mean a cap liability of $85 million. In essence, the Waltons effectively are guaranteed to pay him $161 million.

The Broncos’ game against the Colts encapsulates every problem with the organization. A 12-9 loss for the Denver, the chore of watching the game was too much for Broncos fans, who began leaving the stadium before overtime despite the fact that their team had a chance to win a crucial close game.

Wilson threw for 274 yards on 39 attempts with two interceptions and no touchdowns. He couldn’t hit anything over the middle of the field and had difficulty connecting with his teammates on deep throws down the field. 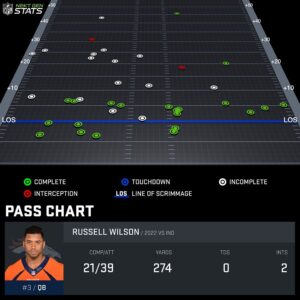 As Hackett said after the game, “We keep continually hurting ourselves, and I think that’s the thing that’s frustrating.” He continued, “We need to address that as an offense, and we need to fix that because the performance by the defense was spectacular, and we’re wasting those great opportunities to be able to win a football game.”

Those opportunities are coming in part from a stellar defense. Bradley Chubb is putting in performances worthy of any premier pass rusher in the league, and the complement of rushers around him was able to put Colts quarterback Matt Ryan under duress for 50 percent of his snaps. The defense forced two interceptions – both from Caden Sterns – and four fumbles, though they were not able to recover any of them.

As Hackett said, “The performance by the defense was spectacular, and we’re wasting those great opportunities to be able to win a football game.”

The fit between him and Wilson has been extraordinarily bad. Hackett can’t seem to design an offense around what Wilson is supposed to do well, and Wilson can’t seem to operate within the structure of Hackett’s vision.

“[You] want to always try and get him into a rhythm,” Hackett said of Wilson’s play. “[and it] didn’t feel like we were able to get him in that and need to do a better job. And it starts with me, to get him in that rhythm with all of the wide receivers and tight ends.”

The Broncos were 2 for 15 on third down and committed seven penalties for 49 yards. Receivers dropped at least three passes, and the running backs had a success rate running the ball of only 39%.

“For us, the offense is going through some adversity, and I believe that they’ll get through this and they’re going to learn from it and we’re going to grow from it,” said Hackett.

At this point, given the performance Wilson is giving them, the Broncos would be better off running the ball. Unfortunately, the Broncos didn’t have their starting running back because of a knee injury that put Javonte Williams on the injured reserve list. While Melvin Gordon has been a capable back in the past, he also had four fumbles in the previous four games and almost put another one on the ground in Thursday Night’s Performance.

They were only able to get 3.6 yards a carry out of Gordon, which might be why they were so inclined to throw the ball despite how ineffective Wilson was. That uneven passing game and unreliable running game – as well as the penalty problems – resulted in an off-schedule offense that had to dig into the limited third-and-long playbook to try and rescue drives.

“It’s always tough on offense when you’re third-and-15, third-and-17, this and that,” said Wilson after the game. “At the end of the day, throwing two interceptions can’t happen. Can’t happen. I let the team down tonight.”

After the kicker battle resulted in a 9-9 tie, the game headed into overtime, where the Colts immediately put together a scoring drive and set up a field goal to put them ahead 12-9. The Broncos were forced to respond with a drive of their own and were able to drive all the way down to the Colts’ five-yard line. On fourth-and-1, near the opposing goal line with the game on the line, Wilson’s head coach decided to throw the ball. The moment was not lost on Sherman.

Hackett’s best decision of the night was to end the game early.

Even then, he couldn’t manage to turn a stellar defensive performance into a win, instead putting the ball in the hands of his most unreliable player, someone who was so determined to throw the slant to Courtland Sutton that he missed wide open K.J. Hamler in the end zone.

At the end of the day, the Broncos put a bad product out onto the field and doubled down on its biggest flaws in the most crucial moments.

Unfortunately for Walton, there is no return policy in the NFL.