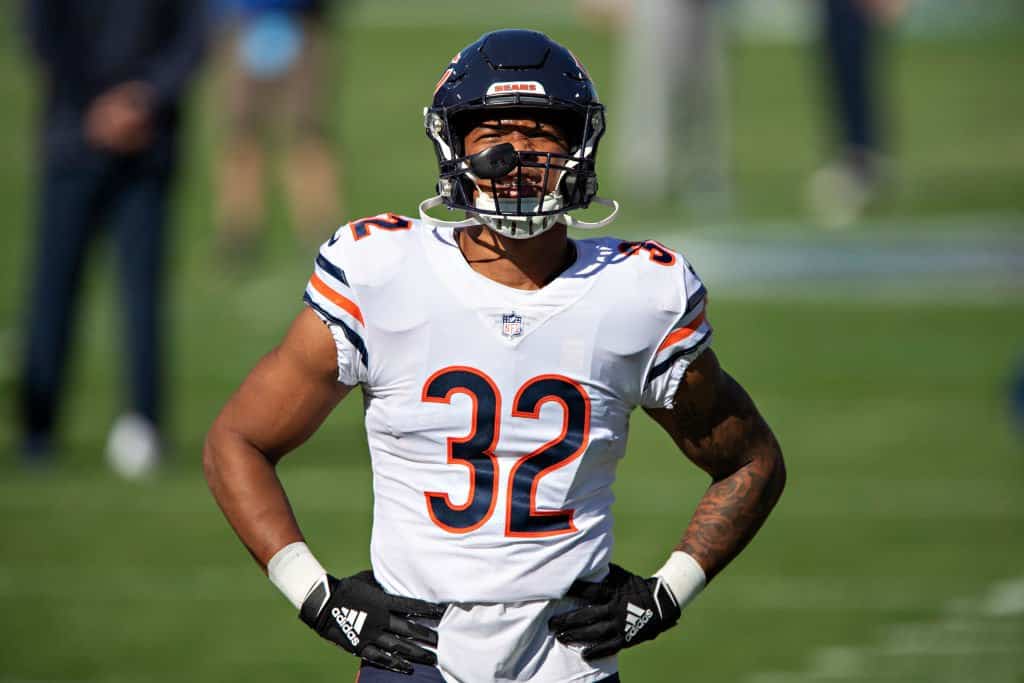 NASHVILLE, TENNESSEE - NOVEMBER 08: David Montgomery #32 of the Chicago Bears warms up before a game against the Tennessee Titans at Nissan Stadium on November 08, 2020 in Nashville, Tennessee. The Titans defeated the Bears 24-17. (Photo by Wesley Hitt/Getty Images)
What's in this article? Click to show
Bears RB David Montgomery on track to return from injury vs. Packers
The Bears offensive issues are deeper than the absence of David Montgomery and his recent injury
David Montgomery is a low-end RB2 for fantasy in Week 12
Want more fantasy football analysis and news?

Sitting second in their division, the Chicago Bears could make up some ground on the Green Bay Packers on Sunday as they are set to face off in Week 12. It seems the Bears and fantasy football managers are getting a boost to their lineups as RB David Montgomery appears set to return from injury and rejoin the team. Having been out with a concussion for their last game, the team’s Week 11 bye could not have come at a better time to help minimize the impact. What is the latest news on David Montogomery, and what expectations should fantasy managers have towards the second-year pro out of Iowa State?

Bears RB David Montgomery on track to return from injury vs. Packers

The Bears got some fantastic news on Wednesday as the team announced RB David Montgomery was back at practice and has cleared protocol after suffering a concussion in the team’s Week 9 loss against the Tennessee Titans. Then, late Sunday afternoon, it was announced that Mongomery would in fact play in their Week 12 matchup.

David Montgomery missed the team’s game in Week 10 against the Minnesota Vikings due to this injury. The last time Montgomery was on the field, he managed only 30 yards on 14 carries.

On the whole, it has been a slightly disappointing season for him, rushing 131 times in his nine games for 472 yards and one rushing touchdown. He has also caught 31 of his 40 targets for 212 yards and another touchdown. Compared to his rookie campaign, his rushing numbers are almost identical. His 16 game pace in 2020 has him to finish within 50 yards of his 2019 total.

Where we have seen the improvement in his game has been in the receiving game. Currently, on pace for 53 catches on 73 targets, he has already surpassed his 25 receptions on 35 targets from 2019. Part of this can be attributed to the absence of Tarik Cohen as he is typically the player schemed into this role.

While it is not going to instantly cure the Bears’ offensive problems, getting back your starting running back is always a major boost to a team’s offense.

“Being able to have him get back — just that level of confidence and that toughness that he brings to the huddle and every time he touches the football,” head coach Matt Nagy said Monday. “He’s a complete team player. He’s all about ‘we’ and our team … so I’m excited to get him back.”

There is no mistaking the value of a solid producing running back, but even if you have one that you think is a great fit for your team, they can not single-handily fix your offense—something the Bears desperately need.

In expected points scored by the offense, they are the second-worst in the NFL with an astonishing -32.55 points scored, yet are somehow 5-5 on the season.

Throw in the inconsistent play at quarterback between Mitch Trubisky and Nick Foles, and it is a wonder they have the record they do and still have a shot at the NFC North.

Part of the problem has been the play-calling, which people always point out, and some has to be attributed to the offensive lines play as well.

The topic of David Montgomery’s inefficiency is well known at this point in his career. Montgomery’s 3.6 yards per carry is the second-lowest among NFL players who have carried the ball at least 100 times. That average would be the worst by a Bears running back in 10 years. Since entering the NFL last season as a third-round pick out of Iowa State, Montgomery is last in the league at 3.65 yards per carry.

That also is part of the issue for us in the fantasy community. We forget this is a third-round pick, so just because Montgomery is a team’s starting running back, we shouldn’t place these lofty expectations on him as if he has the draft capital of a Saquon Barkley. His RB24 finish in PPR last year shouldn’t be looked upon as a failure. He is a player, who when healthy, should see at minimum 250 touches and over 80% of the team’s red zone touches. That is a valuable commodity in the fantasy world, even if they are for four yards per carry with a tailwind.

With David Montogomery back from injury this week, he could have a decent day against one of the worst rushing defenses in the NFL.

Those are the finishes that David Montgomery has in PPR formats since Tarik Cohen went down with a torn ACL. He has yet to rush for 90 or more yards in a game, and we know the upside is limited, but finding someone who is getting at least 17 opportunities at the RB position every single week in fantasy can not be ignored.

Running backs are averaging a robust 31.29 PPR points against the Packers, which is the second-highest number in the league. The Packers allow 74.3 PPR points per game to skill-position players, and a league-leading 42.1 percent of that goes to running backs. They’re 21st in yards per carry (4.4) and 13th in yards per game (113.7).

Unless Cordarrelle Patterson is going to have a massive jump in snap share when Montgomery is healthy, his floor is about as safe as anyone due to the volume he will see in Week 12. The Packers allow 156.9 total yards per game to running backs, so if Montgomery receives at least 75% of those opportunities, he should be in lineups as an RB2.