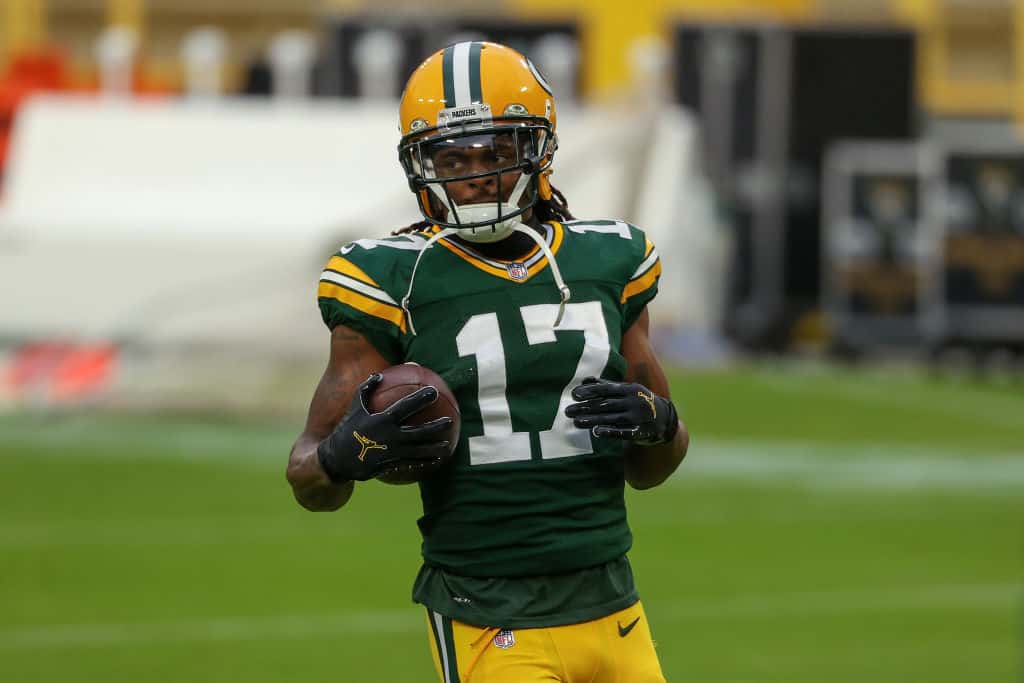 GREEN BAY, WISCONSIN - NOVEMBER 15: Davante Adams #17 of the Green Bay Packers warms up before the game against the Jacksonville Jaguars at Lambeau Field on November 15, 2020 in Green Bay, Wisconsin. (Photo by Dylan Buell/Getty Images)
What's in this article? Click to show
Davante Adams (ankle) was removed from the injury report Friday
The Packers could have both Davante Adams’ and Allen Lazard on the field Sunday
What should fantasy managers do with either Davante Adams or Allen Lazard in Week 11?
Want more fantasy football analysis and news?

Anytime question marks are surrounding the availability of one of your fantasy football players on a Friday, it can have a massive swing on the chances of coming out with a victory. When it is one of the world’s best players, like Green Bay Packers WR Davante Adams battling an ankle injury, things become much more serious. With the most recent reports showing him missing practice, will Davante Adams’ injury keep him out of the team’s Week 11 matchup? And if he does play, what should fantasy managers do if he is on their roster?

Davante Adams (ankle) was removed from the injury report Friday

Wide receiver Davante Adams was removed from the injury report on Friday after being listed as a limited participant on Wednesday, before being downgraded to a non-participant on Thursday.

After practice on Wednesday, Adams was rather vague on his status heading into their Week 11 game against the Indianapolis Colts.

“I’m not even going to go there as far as guaranteeing if I’m playing or not, but that’s the idea. Anytime where I feel like I can come back into a game like that, typically speaking my mindset going into the next week is that I’ll be able to roll. We’re doing all the things right, right now, to make sure I’m as pain-free and not limited come Sunday, and that’s where we are.”

Adams didn’t say when he was injured, but it appeared he got his legs tangled up with cornerback C.J. Henderson on an incomplete deep pass early in the third quarter of Sunday’s 24-20 win over the Jacksonville Jaguars.

“Any time my ankles are limited, it’s going to be tough for me,” he said. “I knew I couldn’t stay out of that game after what I dealt with against Detroit earlier in the year coming out,” Adams said. “I kind of owed it to my teammates, myself, and just wanted to get back out there and contribute the best that I could.”

However, on Friday, Matt Schneidman of The Athletic reported that Matt LaFleur said that Adams should be “good to go.” Following this, Tom Pelissero reported that Adams had been removed from the injury report and will play Sunday.

The Packers will be extremely pleased to have their top wide receiver on the field on Sunday.

Adams is ninth in the NFL in targets (81), eighth in receptions (61), tenth in yards (741), tied for first in touchdowns (9), and is currently WR3 in fantasy scoring with 187.1 points. Only 2.7 points off the top spot held by Tyler Lockett. But there is a massive difference in all of these stats. Adams has done this while missing nearly a month of action. He has only played in seven games where everyone else has been in 10 games. From a points per game basis, it isn’t even close. The gap between Davante Adams league-leading 27.6 PPR points per game to Tyreek Hill, who is second (19.5), is larger than the gap between Hill and the WR40 Emanual Sanders.

Additionally, they could get some timely help in the return of WR Allen Lazard, who is listed as questionable but is expected to make his return to the field after suffering a core muscle injury in Week 3 that required surgery and placed him on the injured reserve.

With it being so long since we have seen him, I think the masses have forgotten how good Lazard was in the season’s opening weeks.

In his short time on the field this year, Allen Lazard had 13 receptions on 17 targets for 254 yards and two touchdowns. From Weeks 1 through 3, Allen Lazard was the team’s WR1 in fantasy points (52.1 to Davante Adams’ 48.2), and he was WR10 overall.

What should fantasy managers do with either Davante Adams or Allen Lazard in Week 11?

I’ll start with the easy one, and that is Davante Adams. Despite the risk of potentially re-aggravating the injury, he should be a fixture in your fantasy lineups this week. There is no way I can advocate sitting one of the best players in the game. Yes, he might be on a limited snap count, but with the ever-present chance he can score a touchdown on just a handful of targets, you have to take the risk. But, be aware that he could tweak it in the first drive and miss the rest of the game. That’s the gamble you have to take.

Allen Lazard is an interesting case. Adams being on the field is both a positive and a negative. Lazard will benefit from Adams drawing the main focus of the coverage as the Packers’ WR1. However, with Adams on the field, he will likely see fewer targets than if he was playing the role of WR1 in Week 11. On top of that, Indianapolis has an outstanding defense. The Colts have allowed the sixth-fewest fantasy points to wide receivers this year while also allowing the fewest 40-plus yard passing plays (2) and the sixth-fewest 20-plus yard passing plays (25).

Lazard’s value likely comes in one of two ways: volume or deep shots. Davante Adams’ presence means we could see him limited to around five targets, but if he can turn that into a handful of catches, it will have been a successful day with around 50 yards and a touchdown. There is plenty of risk in starting Lazard, but the potential rewards are also high.

In this article:Allen Lazard, Davante Adams